The 12th Saffron Fair perpetuates a rediscovered tradition. What can be done with a gramme!

It's a little blue flower that everyone wants. To net a gramme of saffron you need a hundred flowers minimum. So it's easy to understand the hope and despair of producers when they ponder the crop, before harvesting the precious stigmae. It's nicknamed 'red gold' for its rarity and its colour, obviously, but also for its unmistakable taste, which is a feast for the tastebuds.

Everyone is pleased that the fair has outgrown its old venue,
the salle des fêtes, and this year was held in the gymnasium. 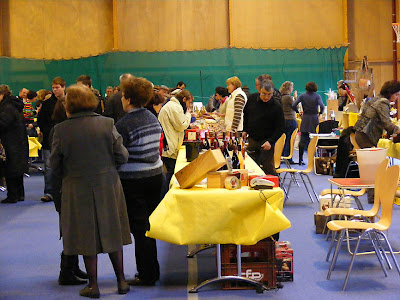 In Preuilly-sur-Claise, they had a fair centuries ago, since the 'saffron route' passed through the Touraine. With its passing, an imperfect history has been reborn today from the ashes. Twenty years ago, saffron producers from the Gâtinais [an area to the north east of Tours, between Orléans and Paris] imported, from Kashmir if you please, the bulbs which would come to cheer up the Touraine du Sud [the area south of Tours to Preuilly] with its welcoming soil. The soil only needs to be slightly damp and they say that three showers in the early autumn will produce the mauve coloured petals, the yellow stamins and the orange stigmae. Two or three years after planting bulbils will flower.

So we are talking about a renaissance in the heart of a district with some thirty producers. They also come from neighbouring le Grand Pressigny, to swell an event that in good years and bad welcomes a thousand visitors.

People come to buy the finest spice at a price they can afford. Depending on the stall rather than on the quality, the price ranges from 18-25 €. 'We generally advise a price around €20' says Agnès Devijver, the President of the Saffron Producers Association in Touraine, created four years ago.

We met the woman below on the right at our very first Foire au Safran. She is a beekeeper who makes the most excellent nougat and pain d'épices - lovely and moist and delicately spiced. Yesterday her sister, on the left, was helping her out on the stall. She is cutting a piece of pain d'épices au safran for me, but they also had nature and orange (which is more for Christmas, she explained). My post about pain d'épices can be read here. 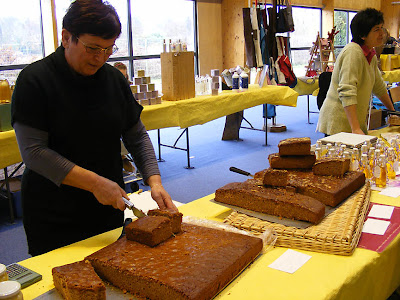 'But if you go on the internet, it's often around 30 or even 40 €'. A gramme gives you enough to cook several dishes. A tenth of your gramme of this precious spice is enough to flavour and enhance both savoury and sweet foods.

Martine from le Restaurant de l'Image and their sous-chef de cuisine handing out saffron flavoured amuses bouches. They did the catering for the saffron themed lunch, as usual, but this year did it on site. I spoke to Martine's sister-in-law, Sylvie, and she said it had advantages and disadvantages, the main one being that there was no kitchen on site, so everything was being ferried down from the restaurant a couple of blocks away. 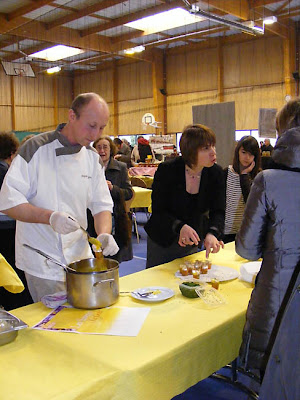 Just like those we can discover this weekend, on the stalls and with the producers. This year there is a stand demonstrating saffron based foods and a restauranteur offers a saffron themed meal.

I bought two fourées au safran from these nice young men. Fourées are like pita breads, and I had mine filled with sardine rillettes to take home for lunch. There was a bit of joshing about setting up a franchise in Australia, but we decided they would need a boat. 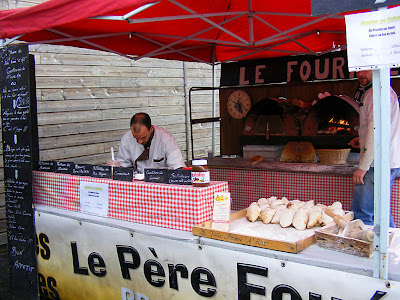 The italicised text is my rather poor translation of the local newspaper article about the Foire au safran this year. It was written in that rather florid and disjointed style that journalists often adopt when writing about heritage and I find impossible to translate well into English. I hope I've been able to give you a 'flavour', anyway.

I was glad to see many of our neighbours at the fair, including our friendly lady orchard neighbours (who introduce me in exactly the same way, as their voisine du verger). They have seen Simon's work in the potager and approve. They also quite enjoy seeing themselves occasionally on the blog I think. You can see one of them peeking out from behind the sous-chef above. I also ran into Jean-Louis, who was one of the team who made our staircase. I was pleased to see him, as I haven't done so for a while, and as many of our local readers will know, he tragically lost his son a couple of months ago. I did my best to offer condolences, and he appreciated that, but it is very sad. Also on my 'chat list' was Monsieur Mériguet, who has taught us so much about saffron. He was unimpressed by my feeble excuses about why I haven't done any dyeing yet with the saffron flowers he provided though. He was hoping I would have something for the fair. Oh well - next year I guess.

The traditional local flatbread is called a fouée, without an R. Is that what those guys were selling? There's a restaurant in Tours, near the Place Plumereau, that specializes in them. They give you a pot of rillettes, some stewed white beans, and a crock of cornichons with all the fresh out-of-the-oven fouées you want to eat. The restau is called Comme Autrefouée.

Ken. We'll put the "r" down to regional differences! It tasted like Naan bread with sardine paste.

Since I didn't have the French to check your translation against I think it was pretty good myself. And, in any case, I think it conveys exactly what it was meant to say.

The meal was excellent... Pauline and I have decided we must eat at l'Image sometime... will we have to save up a lot?
Seriously, I have never had such beautifully done salmon... and the poires and saffron creamed rice were a grand finale!
Managed to avoid buying any of that super nougat... but finished up going home with a nice black lady of Touraine, some of her rillettes, a chevre from La Celle Guenand and two pots of 'tapenade', Olive and fig and Garlic and fig... could have bought more [but we haven't finished the cave yet!]
The only person missing was the potted chocolate spread people... probably a good thing waist wise!

Tim
We usually have the €18.50 menu at l'Image, together with the house red. Excellent eating for not much money.

I guess what you had was fouées fourées. Why not?

I thought you were in Touraine too!

That sounds a very nice price.... are we not licky* to have all these 'smaller' eateries selling such good scran at very good prices!
* that should read 'lucky' - freudian slip or just my appetite?

Is there a difference? Probably not. The pocket breads are called fouasses, fouaces, or fouées in both places. They can be filled, or fourées, with many ingredients.

Hey Susan, look at this link to a slideshow. The Père Fouée't'art actually comes from the Maine-et-Loire department, which is in Anjou. It's the site of the vendor you saw in Preuilly. I'm sure that if you order a fouée, they ask you if you want une nature (a plain one) or une fourée (a filled one).

Père Fouée't'art is a play on words too. Le Père Fouettard is a bogeyman that parents threaten misbehaving children with. "He'll come and whip you if you aren't good," they say. Le père fouettard is also a funny term meaning "buttocks", le postérieur. !

So jealous! This looks likes it was loads of fun--for your taste buds...

more information- in French- in :
http://www.wiki-anjou.fr/index.php5/Fouées