On the last day of February last year we we visited by a nasty storm called Xynthia. She caused 51 deaths in France, flooding in the Vendée and Charente-Maritime, and recorded a highest wind speed of 241km/h (150mph). In Preuilly it was quite scary and some damage was caused, but no-one died and no buildings were destroyed. Many people lost power for quite a long time, but the only damage we had was losing one (1!!) slate, and having no internet for a couple of days.

The Chateau roof lost its stone finial , which caused quite a bit of damage as it fell. Since then the chateau has been scaffolded twice, the first time to repair the damage to the roof covering. Then the scaffold disappeared, only to return about 2 months later. That is where the situation was at until quite recently: on Sunday we went for a walk and noticed that the chateau is now restored to its full glory and the scaffolding gone. 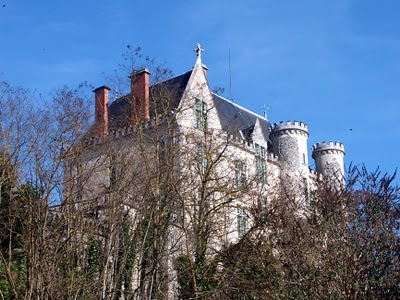 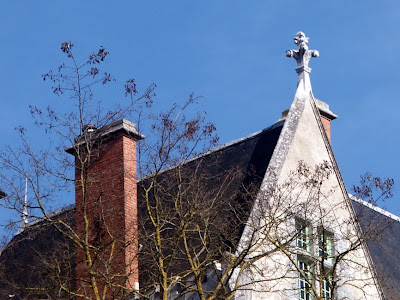 As you can see, we are having a rather nice start to the month as well: clear skies, warm sun, and no wind. The weather is so nice that people are starting to complain...

Somewher, just somewher in the near future, we just might have the same nice day in both hemispheres soon.

Nice to have our view restored. We assumed that the actual carving and replacing of the finial would cost more than the scaffolding; but we did begin to wonder, and it would be interesting to know.

Always with such features I speculate whether it is just mortar and gravity that keeps them there; or are there bronze dowels or similar providing reinforcement. I also assume at this time of the year that it cannot be lime mortar.

I assume it has some sort of non-ferrous rod holding it in place. The mortar is probably one of the more modern lime based ones that can cope with colder weather.