As we mentioned a couple of days back, we had a party on Sunday running concurrently with a party being held by ThirstyKirstie near Grandchester in Queensland. Along with a lot of people in the area, Kirstie and Michael have been flooded in (and flooded out) this year. They decided to start the year all over again and have a New Years eve party at 18.00 on Sunday evening.

A breakfast's worth of drink 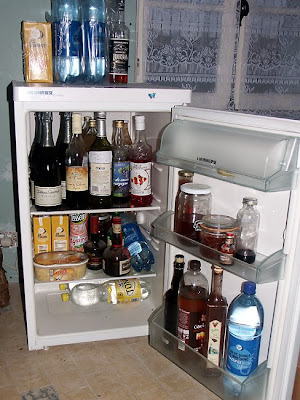 We invited a load of friends and neighbours over to have a drink with us, and asking them to make a donation to the flood relief fund. Nineteen people came (some on their way to church) and a fair few others around the world watched on our internet web channel (58, if Simon is reading the statistics correctly). Several people also very kindly contributed wine or nibbles to the party (Oetejo's spring rolls were particularly popular) and Elizabeth brought one of her wonderful rustic willow baskets as a gift.We collected €160 (AUD$220) which we have donated to the Toowoomba Disaster Appeal. We had intended to give the money to the main Premier's Disaster Relief Fund, but when my father went in to our bank, which is based in Toowoomba, to make the transfer he found they were only collecting for the local appeal and so that's where he made the donation. He hopes nobody minds, and a receipt is on its way. We have been promised some more donations, and I think will hit a total of €200 once they come in, so I will get my father to send a cheque to the main appeal with any money that comes in from now.

A small photo display and the collection tin 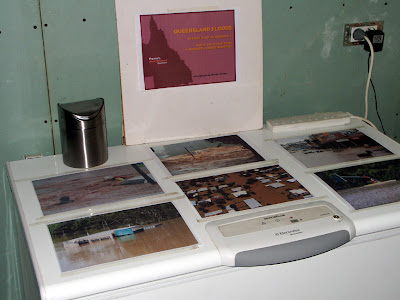 We started at 9.00 with sparkling white wine (Vouvray from Château Gaudrelle, which some people mixed with orange juice) and finished at 16.30. In between times we showed everybody the progress we have made with the house. 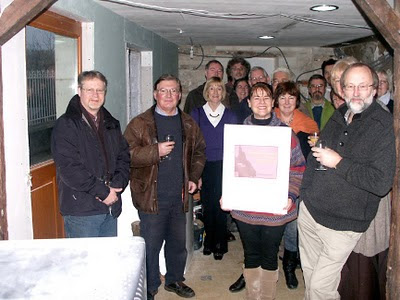 The gathering was international - a bit of an expat and blogger fest in fact. We had Americans, French, English, Australian, Indonesian/Australian and American/Dutch. We really value the contact with not just local French people, but the thriving international community here. A few people couldn't make it due to prior engagements and not being in Preuilly for the weekend, aged parents or the flu (42.5°C temperature on Thursday in one case!). Simon's Uncle Geoff couldn't be here, but had a glass of spiced rum at 8.00am in London. After a morning's drinking, nibbling, mingling and chatting, about half the guests left. The remainder settled down for lunch.

Susan made lamb stew and chocolate angel food cake. One of the guests is a coeliac, so Susan adapted the cake by using chestnut flour rather than wheat flour. Very unusually it appeared to make no difference at all to the end result. Usually straight ingredient substitions to accommodate a gluten allergy are a compromise at best. We had wanted to make something iconically Australian, but struggled to come up with something suitable that we could actually produce in our temporary kitchen. Luckily Rosemary, a fellow Australian, arrived with mini pavlovas.

We'd alerted quite a few friends that the party was being streamed live, so we got messages from a couple of Susan's old school friends, blog readers, and Kirstie and her family during the party. You can see a little of it here.

We'd like to thank everyone who generously supported us and the people of Queensland affected by the floods. Every dollar really counts in reconstructing lives and livelihoods.

p.s. For those interested in what's happening weather-wise in Australia:

Northern Queensland (parts of which two weeks ago was underwater) is in the path of a cyclone which is predicted to be the strength of hurricane Katrina, with winds of about 300kmh and expected to drop a metre of rain in the next 24 hours. The cyclone is expected to make landfall in 6 hours. The radar is here.

Sydney, and Canberra are suffering a heatwave, with minimum temperatures in both towns expected not to drop below 20°C for at least the next 7 days (for instance, at 4.00am Sydney time, the temperature was 31°C)

Western Queensland has had bushfires, Western Australia has had dust storms, and Victoria has just suffered a heatwave and is expecting floods.

Re-doing New Years. Sounds like a cute idea plus I love the idea of collecting for flood victims.

Great party pictures. So good of you to collect for the flood victims. And I'd never heard of chestnut flour before - Googled it and it's apparently quite popular in Italy. I learn something new all the time on you blog...

One wonders just how much more
punishment those poor people
can withstand! I noticed that
Kirstie was commenting on Ken's
blog this morning without mention
of awaiting a cyclone. Must be
numb by now.

I've been reading the cyclone reports and hoping all your family are out of its path. Do keep us posted on how they are.