One thing I have become really good at over the past couple of years is breaking stuff. I believe I have a gift...

A couple of weeks ago I posted a photo of where, one day, the oven in our kitchen will be. Before that, we have to build a new, flat draught-proof wall to hide all the electrical cables, and before we can do that, we have to take all the tiles, plaster, bits of wood and other stuff off the old walls.

When we bought this house it had two chimneys, both of which were demolished when the graineterie was re-roofed in 2007. The demolition of the back chimney caused huge amounts of grot to fall into what was the Temporary Kitchen Mk1, so I when I removed the old tiling I wasn't surprised to find a fireplace behind the plaster on that wall. 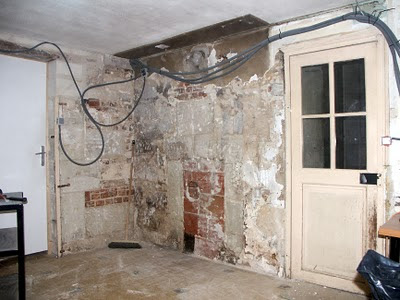 What did surprise me is that it is a properly built stone fireplace. It's a pity to have to cover it up, but even if we weren't putting a new wall in, it would end up hidden by the new stove. At least the old chimney will come in handy for the extractor fan. 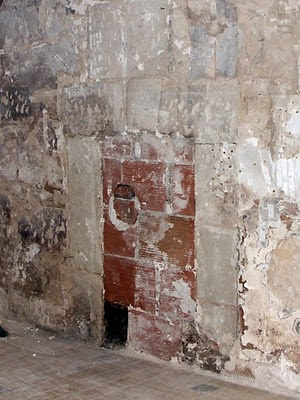 The fireplace has been blocked using hollow terracotta bricks, but that must have been done at least two house modifications ago as you can see where the round flue of a range cooker was later passed through the blocks, and a trap was inserted for cleaning the chimney. That's the black square, from which I took a couple of kilos of age old soot.

Some interesting stuff on Cyclone Yasi here.
Posted by Simon at 09:00

Wouldn't that be an ideal place to put an Aga ?!
(And did you have to eat all the contents of the freezer so you could move it ?!!)

Jean: yes, but they are so expensive to purchase and run. And so 80s of course too :-)) There are loads of the big fancy Godin equivalents on leBonCoin second hand, which makes me very suspicious.

The freezer is on wheels (and my stocks are quite low - we've eaten nearly all our fruit!)

The soot will be very good for your veg growing area in the verger... one of our fellow allotmenteers was a chimney-sweep and used to supply the allotments with vast quantities.