When we were in Paris at the beginning of the month we had (as is now custom) a walk through the Parc des Buttes Chaumont. It is one of our favorite places in Paris, much loved and heavily used by local residents, but often neglected by tourists. As it is only a two minute walk from our hotel it makes for a really handy place to go for a pre-breakfast (if there is such a time) or mid afternoon walk.

The park is in what the English would regard as the Victorian tradition of public spaces, but unlike the parks in London it has a vertical as well as a horizontal dimension. The park has rolling hills and the lake is at the bottom of a huge pit, with which I managed to amaze Susan with how much I knew about the park's history: telling her that was the original Plaster of Paris mine.

The suspension bridge to the
island, last year. 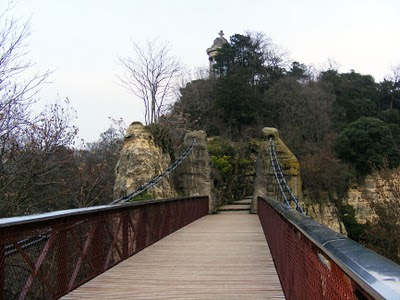 The last couple of years the suspension bridge and building at the end of it have been under repair, so we were pleased to see that by the beginning of 2010 the bridge had reopened, and that this year the building at the "mainland" end of it is now the Pavillon du Lac cafe/restaurant.

The new cafe. The colourful items on
the backs of the chairs are blankets 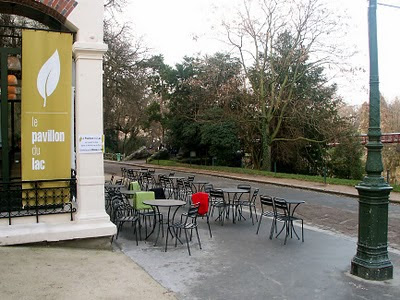 If you are in that part of Paris we cannot recommend the park highly enough. It is a pleasant place to be in most weather (rain could try the relationship) and if you're with children they will just love chasing around the streams and caves.

There is a photo of the lake in spring here.

You've found one of my "best-kept secrets" of Paris too. The very first time I went to Paris, on a school exchange mumblety-something years ago, was to a family just around the corner from there. It's a nice part of Paris, I think.

I didn't know about the Plaster of Paris, but I knew that's where stood, more or less, the famous, or infamous, "gibet de Montfaucon" or the Paris' gallows.

That's also where the finance minister of Philippe IV le Bel, Enguerrand de Marigny, was hung "haut et court", high and short. His body was left rotting for two years. Nothing new under the sun!

Thank you for this "secret" site. It will on my list for next June.

The springtime picture is beautiful. I did not know this existed. Thanks!

It's a lovely park, quite a wildlife haven too. Dragged my ex around it in 1986, just prior to spraining my ankle. Happy days!

Autolycus - sorry if I have let the cat out of the bag.

PG. I don't know if I have seen any wildlife except the ornamental ducks.

It's a lovely place in spring/summer, but really quite dramatic in the middle of winter