Many Rivers to Cross

One of the things we really like about this part of the world are the rivers. Many of them are big, wide and slow flowing, and the rest are just slow flowing. Every single one is a lazy river. The Loire itself is a very shallow, wide river to cross, running across a plain, but in places along its valley the Vienne river runs deep.

The Claise river doesn't run deep, nor is it wide, but it is our river and when we go to the river there is always something to see. If we are really lucky we will see a kingfisher dive in the river, but more often it's a coot paddling along the edges.

All these rivers can sometimes lead to confusion, not a good thing when a bloke is supposed to know his way around. We have had the occasional discussion about the name of the river we are approaching, or what river a certain town is on.

Because of this I have prepared myself a map. 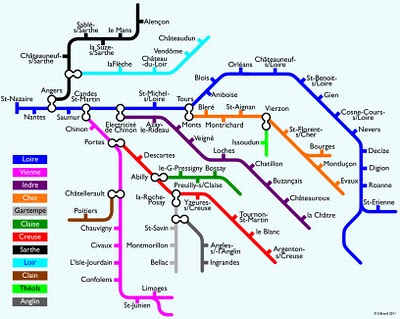 Except that those particularly perceptive amongst you will have noticed it isn't actually a proper map, but a schematic map in the tradition of Harry Beck. True to the spirit of Harry Beck, the geographical relationship of places isn't an issue, the importance lying simply in which order places occur.

These aren't all of the tributories of the Loire River - in fact they aren't necessarily even the most important tributories. It is a fully personalised schematic showing the rivers (and the towns on them) that are important to us.

Email ThisBlogThis!Share to TwitterShare to FacebookShare to Pinterest
Labels: Random Thoughts, Towns and Villages near Preuilly

How did you make it?

I wish I could say that I devised amazing software, but the truth is I did it the old fashioned way,trial and error, continually changing it until i had everything in order. The only concession to modernity was using photoshop: every item is its own layer.

Brilliant, Simon, with Harry Beck's inspired original work put ingeniously to yet one more situation. I'm very envious that you thought of it.

Should it be on the counter at all Indre et Loire Tourist Offices!

Glad to see also that the proper green line has been allocated to the Claise.

Very clever and fun, too.
Wish I had thought of it first !!

excellent and useful - I've seen something similar exhibited at the Tate Gallery in London!

John and Jean. Ie too wish you had thought of it. It would have saved me three days :)

John I was thinking of doing something punning and satirical with the river colours, but "our" river did have to be the District line colours, and purely by coincidence the Sarthe ended up black. I suppose the Loire should have been red (Central), but after that I ran out of ideas.

HAs anyone noticed how stilted my writing was this morning? There is a reason (or 6) for it

Simon, please add the branch line from Le Grand-Pressigny for the Aigronne... Petit-Pressigny, Charnizay and Obterre!
Superb Idea! And without comparing yo used London Transport font too?!

Tim: I was going to put in the Aigronne, but I just didnt have room to do so and leave Preuilly sur Claise as the centre of the system (it happened to fall there by chance, which I took to be an omen, so I left it there!)

Font is Gill Sans - as London Transport use. One of my favorite fonts. (Or does having a favorite font mark me out as a bit of a saddo?)

t'Aigronne is a very important river around here, dontchaknow!
Actually, you could do a 'commercial' version by moving the Loire further north on the bend to Blois to give space... and lengthen the Loire vertically [and shorten it a tad horizontally] to both give room to stretch the picture vertically and add the Aigronne and the missing wine town... Sancerre!!
You should be able to sell the result in all the local tourist hotspots.
Ps.. The LT use a variant on Gill Sans [the y's curve to the right at the bottom]

And you think you're a saddo