Yesterday was Sunday, and normally in Preuilly nothing happens on a Sunday. This is quite different to the rest of the week, where it appears that nothing is happening and quite often appearances don't flatter to deceive. (Or something).

However, yesterday was different. All afternoon I kept hearing car horns parping. This is normally the preserve of Saturdays, when people are celebrating weddings. (If you're invited to a wedding, it appears traditional to drive from one place to another - possibly the mairie to wherever the reception is - leaning heavily on the car horn.) This was different though - Sunday and just the occasional, but still out of place for Preuilly on a Sunday, parp.

When I was returning from the supermarché I had noticed a piece of guard rail at the top of our street, once again unusual. When I stepped out the front door to "weed" the courtyard I noticed a small group of the local ladies standing at the bottom of our street chatting. I could also hear music, the source of which soon became evident... 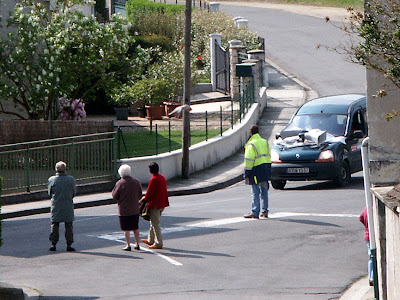 As soon as I saw the ladies I grabbed my camera. A group of people standing around on a Sunday means something is happening. And I was right!! 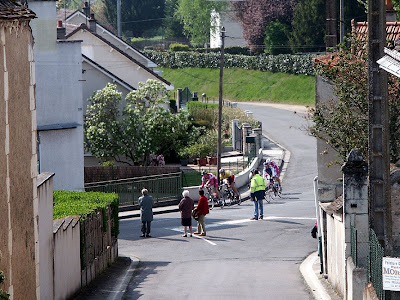 I then realised there was a chap in dayglo at the top of the street - was it possible that I could see the cyclists twice? 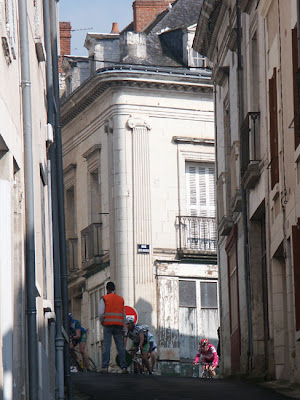 It isn't the Tour de France, but it is typical Sunday afternoon activity - a course velo. Anyone who has driven any distance on a Sunday in France will have seen them - and they have right of way. We last encountered a course in May last year outside Poitiers. Streets are blockaded, diversions put in place and hundreds (or in Preuilly's case, some) people stand on the roadside to watch.

As I was typing this, I heard more parping, and hit the front door just in time for this:

It isn't all two wheeled excitement here. Yesterday morning I saw my first orchid of the year (Early Purple), but it was raining at the time, so I didn't tarry with the photos. 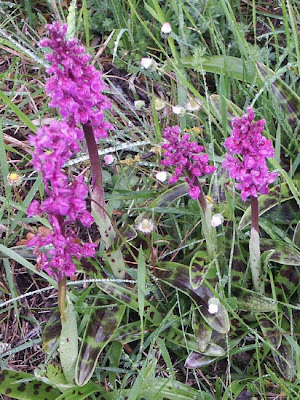 Simon arrived at the right time to snap this race! Have you learned since what type of bicyle race it was ?
I have the memory of D & I arriving smack dab in the midst of a race in La Châtre, in l'Indre.
But, it was a much bigger race (like the one you saw near Poitiers with barriers & policeman).

I like the purple orchid; hope that you will be seeing more this year.

We once got hopelessly lost due to having to take a detour because one of these races was on. It was annoying as we had better things to do than go round in circles trying to get out of their way. French detour signs are not too reliable. I can't remember where it was now but it was a big town and we didn't have a good local map handy and it was pre-tom-tom days. I also remember marshalls getting annoyed with us because we kept turning up. They were not very friendly or helpful, I thought. If we see one now we escape as soon as possible so as not to get tangled up with them. Am I just being a stroppy tourist?

I've remembered, it was Chateauroux.

We got hopelessly lost is Chateauroux (it must be that kind of place) looking for fuel on a Sunday afternoon. That was before we had our French bank account, so we needed a petrol station with an attendant - never easy after hours!

Barbara - no idea what kind of race, it was blokes on bikes. According to the official doculments, it was a Course cycliste

'As soon as I saw the ladies I grabbed my camera. A group of people standing around on a Sunday means something is happening. And I was right!!'

Haha, that is exactly what we say when we see people. 'omg people outside!'. It is a rare occasion that you see people outside in France. We also have a house in Charnizay nearby. My dad has been reading your entire blog!

Hi to you and your Dad !