These two wells are in Roux. Both have their winding gear, and I assume both would still work, given a little attention. They are traditional Tourangelle wells, made of stone with a roof and a ledge for the bucket. 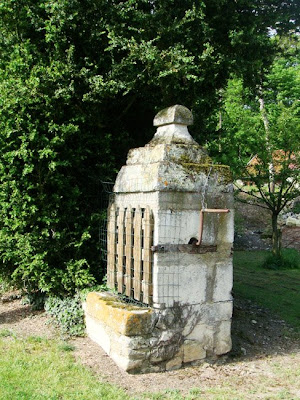 You can see these kinds of wells everywhere in Preuilly and the surrounding area - both in town (some are built in to the walls of houses) and further out in the country, where they tend to be (but aren't always) stand alone structures. 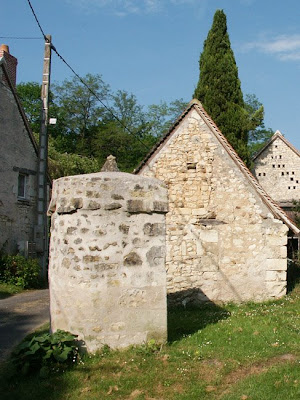 This third well is next to the church in Chaumussay. 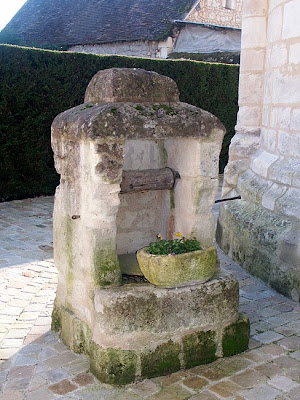 I am not sure if our well will be reconstructed to look like this, because we are hoping we can use it as part of the heating system for our house.

Jill and John have a well on the edge of their garden which they share with their neighbour. It is full of stuff - old stone, dirt and rubbish and will need cleaning before they can utilise it for the garden. Interestingly, it was in use within living memory, well after the introduction of town water in the 1960s; but when the rope broke there was an argument over who would pay to replace it, and the well became defunct.

Email ThisBlogThis!Share to TwitterShare to FacebookShare to Pinterest
Labels: Packet of Three, Random Thoughts, Towns and Villages near Preuilly

We have a community well in our hamlet near Saint-Aignan. It's just across the road from our house, at the edge of our neighbors' property. Nobody uses it any more.

We also have, as you've seen, a very nice fake well in our back yard. I call it le vrai faux puits.

Walt - how can you tell it's fake? maybe it's a double bluff - something that looks like a well built on top of a well to hide it.