All hands to the pumps

If you have a well in your garden or in the street in your village, you need a way of getting the water from the bottom of a deep hole (our well is about 18metres deep) to the surface.

As shown in a previous post, the "ye olde" (is there a French equivalent of that I wonder?) way is the method favoured in fairytales and nursery rhymes: a bucket on a rope, wound around a spindle.

Anyone who grew up before town water came to town, and anyone who has visited the countryside will have seen force pumps. They are the pumps with a long arm you pump up and down, eventually getting water. They use a series of valves creating a vacuum to lift the water and were supposedly invented by Ctesibus of Alexandria, in Egypt. The Roman writer Vitruvius mentioned this device in the first century B.C. and examples have been found in Roman cities, notably Silchester near Reading in England.

A force pump near the Seminary in Bayeux,
now home to the famous 'tapestry' 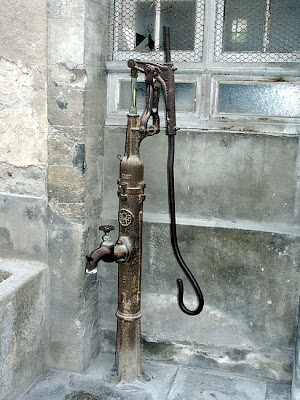 In the garden of the château at La Celle Guenand.
presumably for night watering. 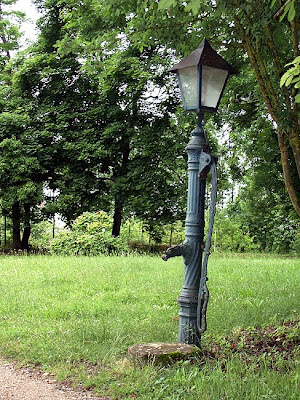 Outside the same château, this more municipal example 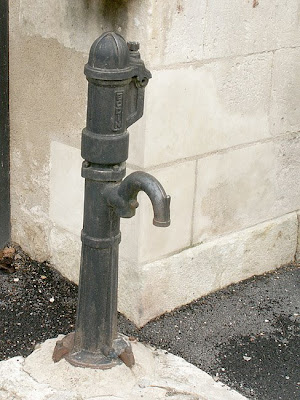 The other kind of pump is the centrifugal pump, which uses a spinning impellor to create suction and lift the water. This is usually done with a motor or engine and is the most common type of powered pump, but there are human powered versions as well. The original was invented by Frenchman Denis Papin in the late 17th century.

At the visitor centre for the Roman ruins in Sanxay 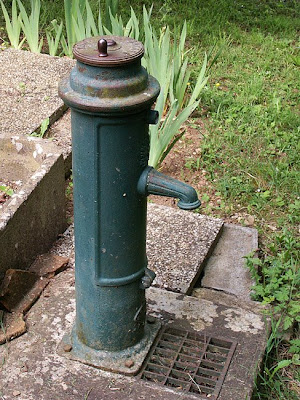 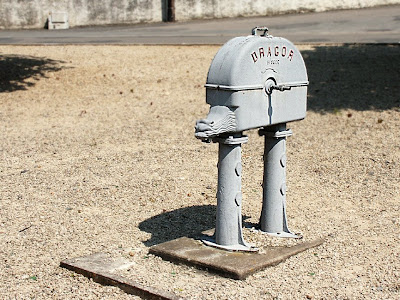 My Personal favorite? A toss up between the "Dragor" dragon, and the impressive if possibly impractical light/pump, I think.

The combination lamp post-pump intrigues me. That's the first time that I've seen one !

The model from Sanxay is also the model that I see in the Parc de Sceaux,a frequent walking spot near my burbs.

Very interesting post on pumps, Simon. Of course, I've seen many of the classic Bayeux' kind, especially in small villages. But I have never seen the Papin's version, even less the quizzical Dragor contraption, which looks more like a gas [petrol?] pump than anything else.

My all time favorite is the one at the château de La Celle Guénand. It is very nice looking and, above all, extremely convenient if you wake up in the middle of the night and feel like having a nice, cool glass of water!

CHM: Which dictionary did you glean your definition of convenient from?! :-) You would have to stumble down at least two flights of stairs and walk about 20m from the back terrace to get to this pump.

Perhaps the owner of this particular pump, who I know reads the blog occasionally may offer us the benefit of his experience?

Hi Susan, I guess it's okay if you are a sleep walker!

Conveniently, here in Virginia, I use the American Heritage of the English Language. When in Paris I consult the Oxford Dictionary and some other less known lexicons. But I mostly rely on my feeling of the language! How dare you?

As my father used to say: "Audaces fortuna juvat!". If you're bold enough everything will come your way.


I forgot to mention how interesting the links were.

Verification word is TUTCHM. How's that?

LOL. TUTCHM is very good. I think you know that I am just teasing you a little. Respectfully yours, Susan :-)

LOL Susan! And, maybe, I was teasing you in return!

Looking forward to see you and Simon in June

The Dragor dragon pump is the one our friends H. and A. have out at Orbigny.

Oh, and Denis Papin was from Blois, in the very technologically advanced 41 department.