Last year Susan and I travelled to Preuilly sur Claise to London by plane and bus, which involved spending a number of hours in Tours near the station. At the time I mentioned that the station looks sort of tropical, but really needs palm trees.

A couple of weeks ago I was in Tours again, and was surprised to see the station does have palm trees outside. I naturally took this as a sign of a growing influence of this blog , but a close observation of the photo posted shows that the station had palm trees last year too. I offer as my defence the fact they are small(ish) palm trees in Versailles planters.

Not only outside - there are palm trees in
planters inside the station, too. 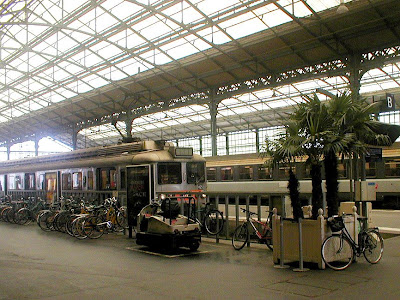 The station was designed by Victor Alexandre Frederic Laloux (Tours, 15 November 1850 – Paris, 1937), a French Beaux-Arts architect best remembered for the 1900 stone façade of the Paris Gare d'Orsay, now the Musée d'Orsay. Laloux worked in a highly ornamented style and taught at the École des Beaux-Arts workshop, where his students included François-Benjamin Chaussemiche. Other work includes the Embassy of the United States in Paris (with American architect William Delano) and the Basilica of St. Martin in Tours. It was built between the years of 1896 and 1898 by Moisant-Laurent-Savey, who also built: Gymnase Jean-Jaurès, Paris, Viaduc de la métro ligne no. 2, Paris, and the Gare de Nice. They also worked on the Musée d'Orsay and the Grand Palais, in Paris. 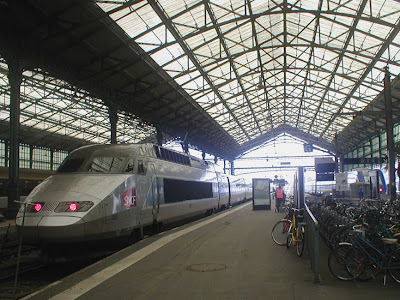 I like Tours station, even on a very quiet Easter Monday. It is very different to any of the stations in London - the trains aren't hidden, and the building isn't full of shops - 2 newsagents, a baguette shop and an information kiosk (so no opportunity for last minute sock or tie purchases) - and that's your lot.

Simon and Susan, when did the new header photo arrive? Has it been there for days and I've not noticed? I like it.

Jean - It arrived at one minute past midnight, Sunday morning. If you have something better to do on a Sunday than read our blog, we aren't offended!

There are lot of memories here for us. Every time we take the train when we come to Touraine.
It takes a almost 3 hrs on the TER Aqualys to do Paris.Maybe if we win something in the loterie ( very hypothetical,that one) we will do the TGV...

Barbara - if you book 2 months in advance you can get the TGV for 17€. It depends on what dates and what times you travel though