Just north of the mystery mill on the River Creuse is another little mystery.

This is "les Patrières", which looks like a model farm. We have not managed to find out anything on the internet about the farm, except that they grow grain. The view from the road gives the impression that all the building are associated - big farmhouse, worker's houses, barns and animal sheds. 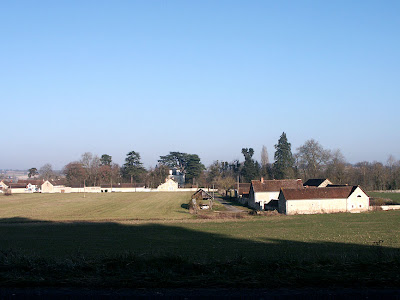 The big farmhouse is dwarfed by its Cedar of Lebanon, which looks to be one of the biggest I have ever seen, but also within the walled garden is what appears to be a Wellingtonia (or maybe a Sequoia) and an araucaria (possibly a monkey puzzle) 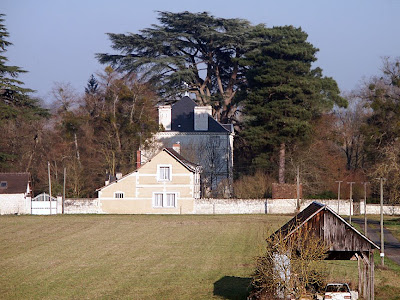 To identify the name of this farm/hamlet I used Géoportail, the French government's mapping gateway, which has arial photos and and all different maps. The difference between Géoportail and Google maps is that the maps on Géoportail are the official French IGN maps, with a lot of detail. There are also layers like cadastral maps (very useful for checking up which bit of land you own) and a watercourses map. 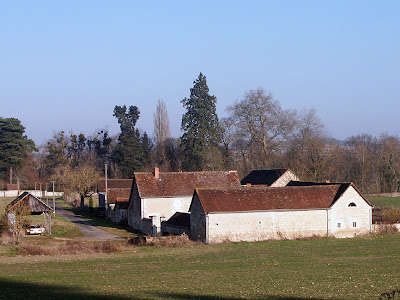 Interesting things, maps and in France, the history of mapping. Apparently its only recently that reliable maps have been available. As late as the 19th century the locals were still chasing off and doing thoroughly unpleasant things to the mapping surveyors. So its entirely possible that your farm was called something else or located somewhere else on earlier documents!

Thanks for a fascinating link. We used Geoportail to look at some of our favorite places and found one place mapped down to its allee of chestnuts, which are square on the map. And so you provided a full, rich evening of entertainment. Yes, we're easily entertained.

I'm a huge fan of the Géoportail. The UK doesn't have anything nearly as integrated or free at point of use yet, but a government advisory group has been set up. I got a questionnaire from them the other day (the organisation I work for will provide significant input, and possibly run the UK geographic gateway, at least in the short term). I was pleased to see that one of the questions was along the lines of 'should the UK geographic gateway be similar to the Géoportail', so you can guess what my answer was.

Nick: Napoleon set up the cadastral system, and it has been adopted by most sensible national mapping organisations around the world (including Australia, but excepting the UK, who seem to have been against it simply on the grounds that it was a French idea).