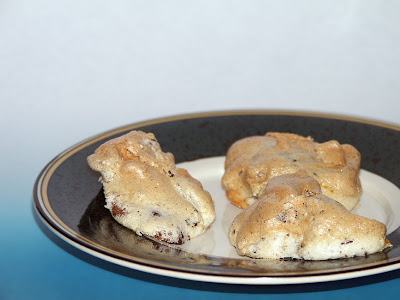 I bought a cookbook as a present for my sister recently, and since I had it for a couple of weeks prior to seeing her, I got to road test some of the more interesting looking recipes. The first one that caught my eye was for Pets de Nonne, since it called for two ingredients I am always keen to be using up, egg whites and walnuts, and the book said it was a traditional recipe from the upper Loire. They are sort of like Rocky Road meringues with their chunks of chocolate and walnuts. The recipe also includes angelica. This is an ingredient I could have purchased locally grown, from the marais poitevin village of Coulon a couple of hours to the west of us near Niort, and which we visited last summer. Angelica grows wild in many wet places in central western France, and was traditionally cultivated in the Coulon area. However, I didn't have any, and to be frank, although it's a pretty green colour, it's basically candied celery, and I thought orange peel was a safer bet tastewise.

Angelica growing in a public garden by the canal in Coulon 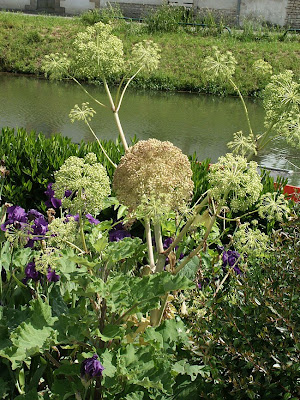 I had not heard of Pets de Nonne before, but the name alone makes them stand out. Look away now if you were delicately raised...


The name means 'Nun's Farts'. Because this was a new recipe to me, I looked up other recipes for Pets de Nonne, none of which are anything like this one. Apparently, French Pets de Nonne are normally what I know as beignets – little sweet deep-fried balls of choux pastry, sold by the boulangerie in brown paper bags holding a dozen. The French-Canadian recipe is different again, being a way of using up scraps of pastry by making spirals of pastry and spicy Maple syrup.

Email ThisBlogThis!Share to TwitterShare to FacebookShare to Pinterest
Labels: Food and Drink, French Language, nature and wildlife, Towns and Villages near Preuilly

I have a recipe book containing the version of Pets de Nonne you mention, and I too am confused by the different recipes on the net.

I was looking for substitutions for the angelica as I have none. Like you I thought I would try a little candied peel instead.

Clearly Canadian nuns must be on a different diet...

I think of angelica as rather more like fennel, with its aniseedy taste - but it's so long since I tasted any I may be wrong - and heaven knows what was sold under that name in the 1950s.

I don't know your version of pets de nonne, but it sounds and looks good. I think the classic version is this one. And they are called beignets in the recipe.

Oh, and I meant to say, the better-known pets de nonne are made with a pâte à choux, which is a cream-puff pastry.

Auty: you are right. Angelica is faintly aniseedy tasting. All these plants – angelica, aniseed, celery, fennel – are all from the same botanical family, and all tend to look and/or taste similar.

Ken: I came across the recipe you link to in my search for the 'real' pets de nonne. I think you are right that this is the classic version.

I think you mistake with gougères.

Gougères are made with pâte à choux that has grated cheese mixed into the pastry. They're baked, not fried.

Whether they are the original version or not, they went down extremely well at the soiree I took them to on Saturday.
The verdict was that they were unusual and delicious, and their name caused some amusement.

Well done Stephen :-)) I see you are set upon making a reputation for yourself in the district. Did you take photos? I'd quite like to see how yours turned out. My aged oven doesn't produce good meringue these days, so mine are a bit soft and a bit brown.