At the end of my recent visit to Australia, I had a day in Sydney. I arranged to meet a friend at the Powerhouse Museum, and we mooched around the Rocks (visiting the Craft NSW Gallery), Darling Harbour and Circular Quay and the Botanic Gardens.

At the Powerhouse I learned about the remarkable Lucien Henry, a Frenchman exiled to New Caledonia after the political upheavals of 1871, who then made his way to Australia, where he became an influential artist, designer and teacher, one of the first to encourage the use of Australian imagery.

Can you tell we are not in France? 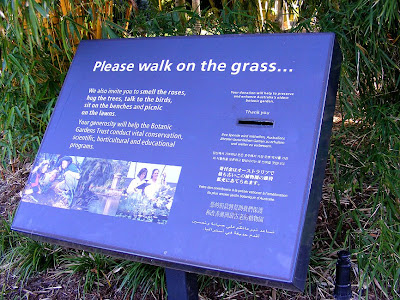 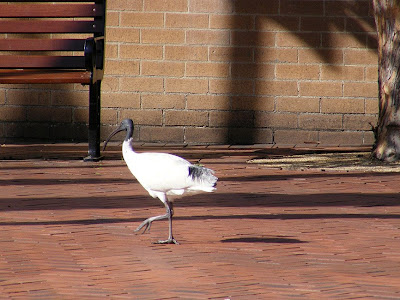 A Folly for Mrs Macquarie. Notice anything peculiar? A detail of the 'ceiling' can be seen here. 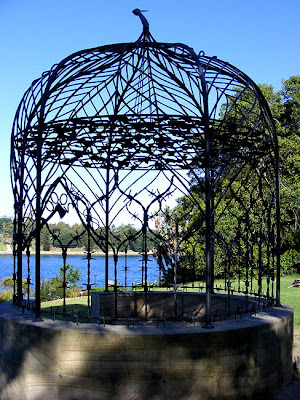 There is a large, smelly and vociferous colony of Grey-headed Flying Foxes Pteropus poliocephalus in the Botanic Gardens. Mostly they just hang around sleeping during the day, but you can usually see one or two on the wing. 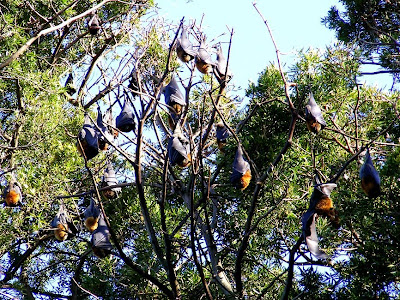 Email ThisBlogThis!Share to TwitterShare to FacebookShare to Pinterest
Labels: Gardens and Parks, Memorials, nature and wildlife

Susan, what is that ceiling made of? Leg irons? Horseshoes? Railroad spikes?

Our fender-bender in la Roche-Posay was two or three years ago. The damage was slight and the other driver so obviously did not want the police involved. We realized we had no vocabulary for a police encounter if it had been serious. May we phone you if we're ever rear-ended in France again?

Carolyn: This link may explain - http://www.publicartaroundtheworld.com/A_Folly_for_Mrs_Macquarie.html. The ceiling is possum bones rendered in wrought iron. This work is a rather curious expression of public national self-flagellation, being erected to celebrate the Millenium, but representing the disasterous impact of white settlement on the local ecology and original inhabitants.

Carolyn: We've been side-swiped in France. It was the other (French) driver's fault and she was extremely embarrassed and apologetic. All was settled quite amicably at the side of the road, with the filling in of the accident report form (Constat Amiable d'Accident Automobile or European Accident Statement). So long as no one is injured and both parties agree on the statement, no police need be involved. All very amical and everyone shakes hands and drives off at the end. All cars in France must carry these forms, which get sent off to the insurance company.

Feel free to phone us if you have a car accident in France again.