The village of La Roche Posay is about 12km from Preuilly sur Claise, and sits on the bank of the Creuse river at its confluence with the Gartempe.

The name will be immediately familiar to anyone who has ever visited a cosmetics or skin care counter: the local water is high in selenium and has been used for many years for skin care. A spa was founded in the village in the 19th century to treat skin disorders, and had grown into a huge cosmetics firm by 1989, when it was sold to l'Oreal.*
The Original Etablissement Thermal 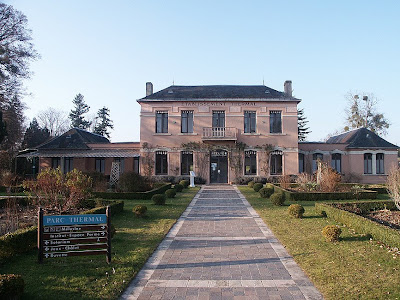 The village itself is attractive and is still a curist (health tourist) destination, with many visits paid for by the French welfare system for the treatment of various dermatological ills. Because of this it has a huge number of hotels, lodges and apartments available compared with any other French village of the same size (population 1400). 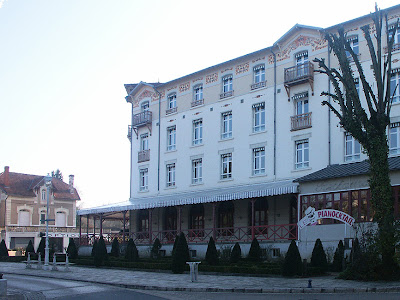 There are a number of spas dotted around town, as well as parks, a golf course, and a good scattering of cafes and restaurants. There is also a casino and horse racing course. They hold various music festivals during the year, based around the town square, and during summer it is a very busy, bustling town. 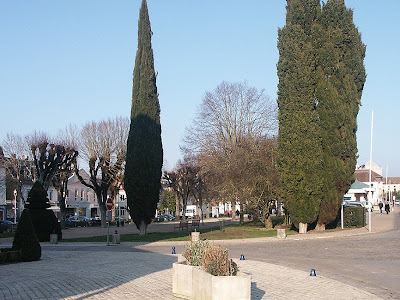 During winter, however, most of the spas close (I believe that of the 3 spas in town, only one remains partially open), the hotels, cafes and restaurants take their holidays and the town reverts to being a quite little backwater.

Despite the signs forbidding it, these boulists
play most days of the year in the town square 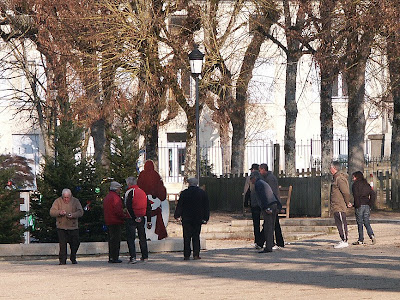 These photos of La Roche Posay were taking at Christmas

*La Roche Posay is not to be confused with Roche Pharmaceuticals, a completely unrelated Swiss/USA company.

Note from Susan: La Roche Posay is pronounced like 'lah rosh-pozzeh' if you are Australian (the 'o's are soft, as in 'cot', not hard as in 'coat', and Roche and Posay treated as if they are one word). If you are American, La Roche Posay apparently sounds more like 'luh rush-puzzeh' though – see Ken's post on the pronounciation of another nearby town, Loches, on his blog Living the Life in St-Aignan. (See Ken's comments below if you want to know how it is really pronounced.)
Posted by Simon at 10:00

We went to La Roche Posay on Boxing Day 2007. We had pot au feu for lunch in one of the cafes. It was very warming and tasty on a bitterly cold day - definitely "comfort food".

How can we forget lovely La Roche Posay? Our car was rear-ended there by an intense man with a lot of tattoos.

The vowel of Roche in La Roche-Posay, like the O vowel of Posay, is in an unstressed syllable, the tonic stress always falling on the final syllable of a breath group in French (in this case, on -SAY, with the S pronounced as Z.)

Therefore, the O of Roche in La Roche-Posay and the O of Loches are not necessarily pronounced the same way. The O vowel of the town named La Roche, however, is the same as the O vowel of Loches, which is the open O — in both cases, it's in a closed, stressed syllable.

In neutral French, the O of the words "rose" or "pot", for example, is closed, and is distinctly different.

The O of Roche and the O of Posay are not so distinct, because they occur in unstressed syllables. Some French speakers might pronounce them as an open O and others as a closed O, or as something between the two, a partially open, partially closed O.

Any questions? There will be a test next Monday.

Jean: yes, La R-P is a good place for a bit of comfort occasionally. The cafés are often open when all the villages around are closed.

Carolyn: I didn't realise you'd had an accident – was that last year when you came to check out P-s-C, but we weren't there? La R-P isn't really designed with the car in mind, so driving through the middle of town can be a bit interesting.

Ken: Well, I admit that my Fronsh cud be butter, but that will teach me to extrapolate :-)

I meant to change the luh to lah before we published, but forgot. Will do it now, then will be looking up what a tonic stress is. Better be something you take with gin.

Susan, I think Ken means "tohnic stress" not "tonnic stress".
(only teasing, Ken)
I'll take mine with ice and lemon.

Big LOL. Having looked it up now, I see you are right Jean. It never occurred to me! How dim is that?! I wonder why the term is 'tonic' and not 'tonal'?

Well, whatever that was about....I don't understand!!!
I would like to say that I have admired your blog particularly for the photos and presentation, but we were glad that the Noel version did not continue... Not red for you!!!

I have also admired your style and your knowledge!!

It s extremely interesting yet I cannot compete|!!!

Thank you, however for your occasional comments especially re food on my web blog. It has been a difficult year for blogging ! I don't do 'followers' officially but that does not mean that I do not follow!

Take care of your selves and Good luck with Renovation. It can be inebriating yet soul destroying but at the end it can be electrifying!! Bon Courage!!!
We love France.

Sweetpea: Glad to see you back here, and hope the foot continues to improve. Thanks for the kind words about the blog.