Hoopla !
Brightly pronounced 'OP-lah', this exclamation is used much more in the north than here in the Touraine. Here you might occasionally notice doting parents swinging a small child over a puddle using it in the sense of 'over we go' or 'wheee'.


In Lille though, you could hear Hoopla ! several times a day. It is especially noticeable that when waiters deliver your meal they put the plate down with an Hoopla ! Apparently, producing the dish just as we ordered it is something of a magic trick in Lille. We found this rather disconcerting at first, fully expecting the next thing to be drum rolls and coins appearing from behind our ears.

You can use Hoopla ! too when you pick up something that has been dropped and return it to the owner. It is just a slightly more ostentatious way of saying Voilà !

Along with language, the architecture
in Lille is very different to the Loire Valley 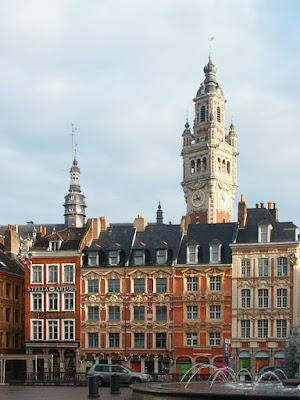 I was quite impressed by the historic part of Lille - definitely more Flanders than France in feel. It was raining and I had somewhere else to go, so I didn't linger, but it's on the list for a return visit.

One of the things that tickles me about french is the way you (or at least they who speak the "language") can have whole conversations without really using any proper words. Sit in a bar and listen to the conversation as they watch a football match. Oopla, ooooh la la la laaaaa, ohhhh, bof, mon oeil!
No wonder I'm having trouble learning it!

I think that's how you spell it...

Walt - I think I watched that game too.

Word verification is woomp, which I might add to the lexicon.

Hi Susan, I'm pretty sure that "Hop là!" is not regional. You'd hear it often in Paris or Touraine, for example, not just farther north. In 40 years in France, I've heard it all over the place.

If you're American, note that "hop" in French is pronounced more or less like "up" in American English. The H is silent, and the vowel is not the sound of "op" as in the "op-ed page" in our newspapers. It's nothing like the sound of either "hoop" or "hop" in Am. Eng.

The American Heritage dictionary does say that the English word "Hoopla" might be derived from the French expression.

Ken: many thanks for that knowledgeable and comprehensive comment. It hadn't occurred to me that it was actually 'hop là'. Les Prulliaciens are definitely far less prone to exclaiming 'hop là' than our experience in Lilles, that's why we assumed it was a Northern thing.

Re your last sentence – pas mal. I'll PM you in the next couple of days.