Yesterday I mentioned we visited the Éolienne Bollée at Dolus le Sec. It is conveniently located about 150 metres down rue de l'Éolienne, which should have been a clue the half dozen times we have driven through the village without seeing the main feature...

The éolienne in Dolus has been restored, and has been in working condition since 2002. In the photo below, not only can you see the éolienne, but also the lavoir (laundry - the low wooden building on the left) that it fed. 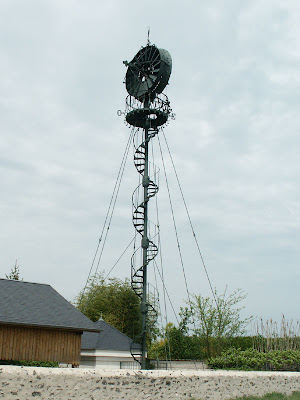 The Éolienne Bollée is an interesting creature. [alert: "windmill nerd!"]

Unlike most windmills, this is a true wind turbine - that is, not only does it have a turbine (the turny roundy bit that does the work) it has a stator - a set of stationary blades combined with a ring that directs the wind onto the rotating blades. This compresses the air and makes the turbine more efficient. On later models the ring around the blades was enlarged to make a slight funnel to increase the amount of wind collected.

The Éolienne from downwind.
You can see the funnel to the right of this picture 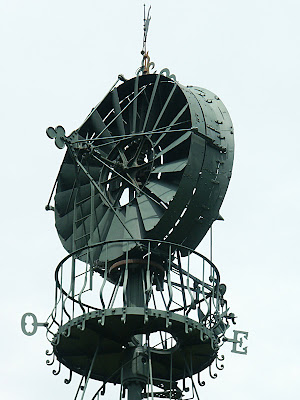 In addition, the whole ensemble has a little rotor (on the front) and counterweight (on the rear) arrangement that turns the turbine to face into the wind. The rotor is also connected to a latch that releases once the wind reaches a certain speed, turning the turbine edge-on into the wind. This stops the turbine spinning out of control in high winds and damaging itself.

The rotor arrangement on the front 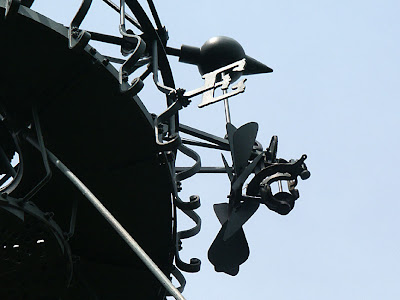 There is a drive shaft inside the column that supports the turbine, and through a series of gears this drives the water pump. This is housed in a small stone building near the base of the column. 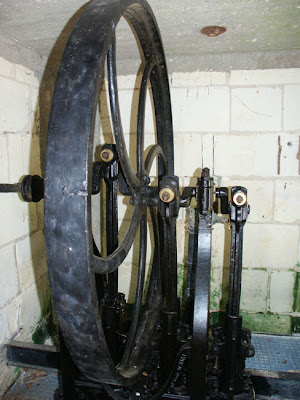 Reading what appears to be the definitive webpage on the Éolienne Bollée, I have discovered that when you bought one of M. Bollée's wondrous machines it was delivered in a kit of parts by rail to the nearest station, where the new owner had to collect it and take it to the site where it was to be erected. Then the factory would send someone out to actually piece the whole thing together. The Éolienne Bollée was modular, so to make it taller you just needed to order more of the column/spiral staircase pieces.

The maker's plate on the base of the column. 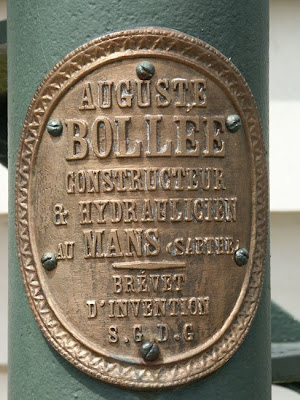 This is the second Éolienne Bollée we have seen, the first being at Confluent, near Yzeures sur Creuse. In the comments to the blog we wrote about it, Susan said:

"John Walter, who runs the Friends of the Eoliennes Bollée website with Régis Girard, tells me that our éolienne is one they thought had been dismantled, so I was pleased to be able to give him updated information."

Since then, however, I have noticed a photo in the book of old photos that there is a pic of the mill at Yzeures, showing an Éolienne Bollée by the Creuse River in Yzeures. This means either the éolienne at Confluent is a newly discovered, previously unknown one, or the éolienne at Yzeures was dismantled and moved to Confluent. It is certainly no longer in Yzeures - the factory/mill it was at burnt down in the 1960s. 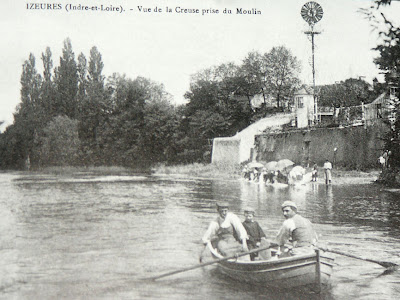 Hi Simon & Susan,
I think that you are a bit like myself; I'm always discovering new spots.
And that is a very unusual windmill ! I probaly missed something in my reading but, what year was it constructed?

I really loved th old postcard of the rowers near le moulin. We have been there several times, and have enjoyed the tiny Mado Robin museum.

Have a nice Sunday :)

We are talking the last quarter of the 19th Century for the éoliennes.

Unlike you, we still haven't made it to the Mado Robain museum. We really must try harder!!

We had something personal that made us want to go... Mado went to school with my Hubby's granny. And we also discovered through our Genealogy that Granny & her family are distant cousins with Mado !
But it goes back a long long way ( 17th century !!)

Very cool. I think we need to make a day trip out of this place.

By the way, is John Walter someone you know? Did I miss that?

Walt,
The John Walter mentioned is (in this case purely coincidentally) the man who co-authored the website about Eoliennes Bollée, and also a book about them.