This is a piece of advice for anyone contemplating a trip to France - especially country France.

The French shake hands. Even more so than the English or Australians, if you are introduced to someone, or even introduce yourself to someone, you must be ready to shake hands and be unfazed at the prospect.

This applies not only to social situations, but when taking your car in for a service, talking to the builder or plumber, or even walking into a bar. Take your lead from the other person, but be prepared. There is a lot of embarrassment potential in not being prepared to accept a handshake offered in politeness.

I used to shake hands with our roofers every day. It was expected that a cheery "bonjour" be accompanied by a handshake. If I wasn't at home when they arrived (or inside, busy), at the first opportunity we would call bonjour to each other. Quite often this would be accompanied by them climbing down the ladder to shake hands. If their hands were dirty, they would proffer a wrist to be shaken. (I have done this myself if I am working and my hands are dirty (HAH!) and someone calls to visit. Wait until they are within shake range, extend the arm, but with the wrist bent back so they can take the wrist and shake it).
Blokes you would shake wrists with. 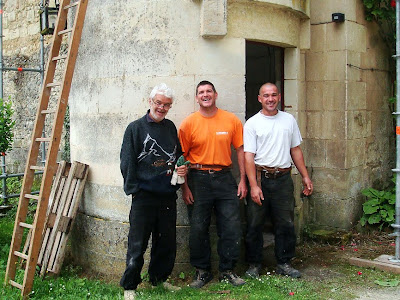 The wrist shake can also be the proceedure when you are wearing work gloves, but it is better manners to remove the gloves and shake hands properly. If you are both wearing gloves, or both have dirty hands it is polite to wipe your hands on your dungarees and shake the other person's wrist.

There is a variation on the wrist shake, and that is the elbow shake. This is much practiced by car mechanics and plumbers when their hands are dirty beyond the wrist. The proceedure is similar, but with the elbow bent rather than the wrist. I have never seen a wrist to wrist shake, or an elbow to wrist shake. Someone has to use their hands. The only alternative, if you are both excessively dirty, is to look at your hands then at the other person and give a rueful grin. Even then, however, often hands are wiped and some variation of handshake performed.

French men see nothing strange in this. They would see it strange if you offered the Bises though...

Exactly right, Simon. I've never seen a wrist-to-wrist, wrist-to-elbow, or elbow-to-elbow shake. At least one person must have a hand free and not too soiled to participate in the handshake.

It is important to say bonjour with a handshake or a bise once a day, and important not to forget and start over again later in the day. "Ah, je t'ai déjà dit bonjour, n'est-ce pas?" someone will say if he's not absolutely sure.

Nice summary. As for the bise though, there are regional differences in terms of quantity that can be embarrassing - leaving either you or the other person with head hanging in air if you get it wrong. 3 in some areas of the south, 2 in Lyon, and I'm sure there's a 4 somewhere...

Plus in the chilly areas of the Alps, the 'montagnards' sometimes dispense with handshaking and bise altogether - in the Upper Tarantaise valley where I was for five years, virtually all the time in fact. A bit of a shock after 15 years living amongst the effusive southerners in the Vaucluse department!

Really? Is this bloke specific? Because when I was blessed to visit Paris ('93,'97) for summer mission trips and I met Parisians, Other French and international students the bisou (sp?) was the order of the day and when I extended my hand for a shake, more than once it was chuckled at with that look of, "oh, Americans!" Either way, not a complaint but of course, I will repeat I was in Paris. I have found that even the French differentiate between French and Parisians.

FrogBlogger – 4 is Paris, we are 2 here. Thanks for giving us the lowdown on the uplands. Simon and I really must try to make it to more than 200masl sometime :-)

Jenny – yes it's a bloke thing, and a provincial thing. I've been 'bised' by a male Parisian that I had only met that day, and he insisted on 4 when I stopped at 2. I don't think that would happen in Preuilly – it would be handshakes all round. Occasionally you will come across a man who uses the proffered hand as a means of pulling you in for the bises too. Men will backslap other men, but not bise or hug unless they are related usually. Women bise their friends as well as relatives.

Just occurred to me... with all the variations possible on a simple handshake, I wonder what the "one trouser leg rolled up" brigade do in France?

One thing I forgot to mention: When you shake hands, elbows or wrists, it is usually just one businesslike shake. No pumping away like you're trying to draw water, and no lingering hanging on after the shake is done

Susan - Simon... I've just realised where Preuilly-sur-Claise is. Not that far from where I lived myself when a student teacher in a collège (part of uni course) an age ago; Châtellerault, just across the border in the Vienne.

At least they are not like Prez Chirac, "kissing your hand" :-)