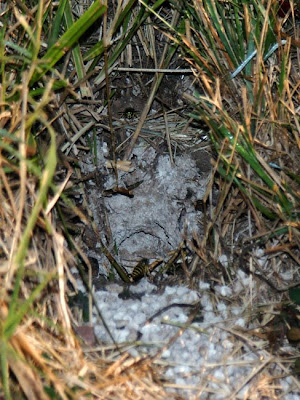 We came across these Common Wasps Vespula vulgaris (la guêpe commune) very purposefully flying in and out of a small tunnel in the bank on one side of the 'arboretum' in Preuilly. These photos were taken in September, on one of our 'tween courses dinnertime rambles. The behaviour enthralled us, and served as a reminder to look down as well as up sometimes. 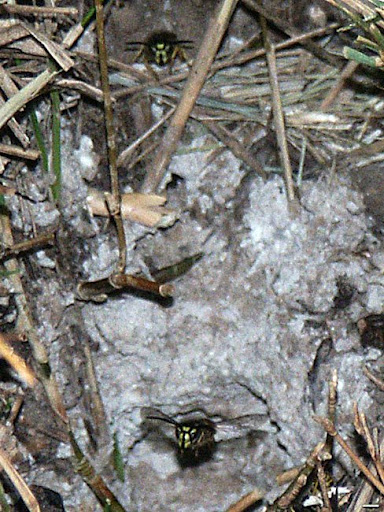 I am always a little wary of social insects, but these were so occupied by whatever important wasp business they were engaged in that they took no notice of us peering down the hole (not too closely though) and taking photos.

These Common Wasps and their very close relative the German Wasps have been introduced to Australia, where they are considered a dangerous pest species. People are frightened of them because they are attracted to food and drink outdoors and can be accidentally swallowed, resulting in people being stung inside the throat, causing swelling that can be life threatening. Beekeepers don't like them much either, as they can invade hives to rob them.

I've noticed that Common Wasps seem to be particularly attracted to raw fish, and market fish stalls can be inundated during the late summer.

In their place social wasps provide a significant natural clean up service, eating dead insects and in their turn, the larvae are one of the favourite foods of Honey Buzzards Pernis apivorus (Bondrée apivore).

For some hilarious wasp action from the French team at Miniscule TV, watch this (best with sound on).
Susan

*Pas folle, la guêpe, as I understand it, is a phrase used to describe a malicious person. It is literally 'not mad, the wasp', so I think the implication is that they are schemers, i.e. not mad, but bad.
Posted by Susan at 10:00

Did you ever work out to your own satisfaction which version was which? I don't think an Australian would let a wasp get close enough to notice any difference!

The English are almost as bad with wasps as Australians - lots of panicking and flapping of arms. We were within about 12 inches of those in the photo - and apart from the one you can see checking me out, they were perfectly happy to let us be, even though I was using the flash on the camera

Hello Simon & Susan,
I have always thought that all creatures have there place on this earth.
Even a yellow jacket can be useful in nature.If one does bother them than everybody can (usually) coexist.
Interesting photos of those wasps in that hole.

P.S. We had a good jaunt through Chaumussay & vicinities Friday. Even if the weather was not great, we enjoy coming over.

Autolycus – your father was not too far wrong in a way. I would describe the various social wasp species as having yellow abdomens with black markings (although they have black thoraxes with yellow markings). Large black and yellow solitary wasps tend to be black with yellow markings and are all completely unthreatening to humans – many of them don't have stings at all, even when they look like they do. I handle and observe insects quite a lot, and my policy is to be properly careful of any insect that lives in a reasonable sized colony eg ants, social wasps and honey bees. No other insects are likely to harm you except for the few that are vectors for illness.

Barbara – glad your visit was enjoyable. Did you catch any snow?

Hi again Susan,
Just a follow up; first, my typing is off; no I'm not "folle" & would not disturb yellow jackets !

No; we did not get snow Friday.We got some snow Sunday here near Paris where we live. It didn't last long though !
Have a nice evening.