A Picnic by the River

One day in September we decided that a picnic would be nice. We had some delicious food that needed eating – half a charantais melon, half a boule, half a bottle of white wine, three super ripe tomatoes and a few leaves of homegrown salad leaf. 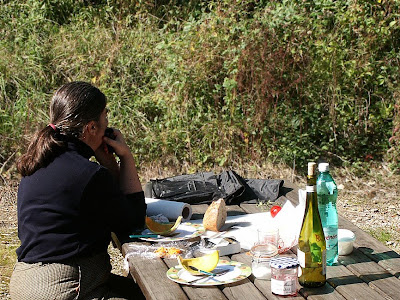 Simon doesn't like this picture. He says it looks like I am sulking, but actually I am watching a robberfly which has landed on the bare earth just visible beyond the picnic table.

Our repast on this occasion was by the Creuse at a picnic spot called les Libellules. This is about 50m down the road from the mysterious abandoned industrial complex (the picture below is taken from les Libellules, looking down stream to la Gatineau and the weir at the derelict factory). 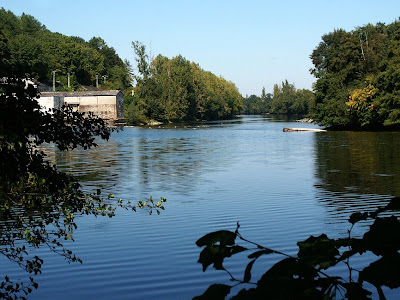 Below, looking straight across the river from les Libellules picnic spot. 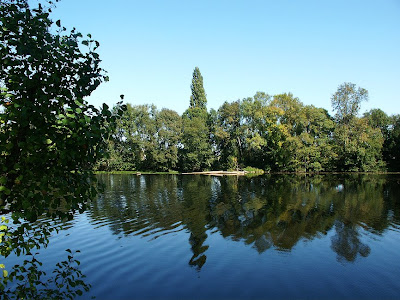 We were not alone at the picnic spot. These two old companions (below) alternate between munching their way through a pile of hay and snoozing in the shade. I assume these are Percherons, like the handsome pair we are told operated from our graineterie. I thought Percherons were always black, but apparently some breed societies accept a few other colours such as the chestnut with cream mane and tail that is favoured around our area. 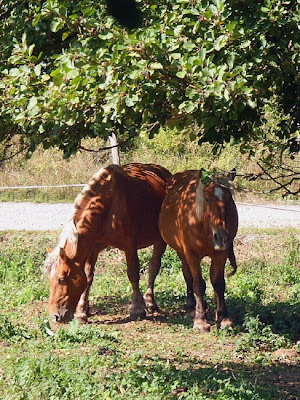 Further along this group of youngsters stared with slightly suspicious curiousity at us. I think they are Limousins, a popular beef breed. The herd was a mixture of heifers and steers. 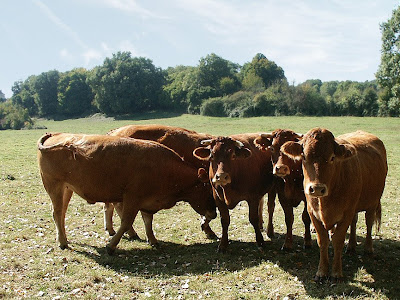