This is Susan's translation of an old article in la Nouvelle République (click on the link to see the article in French).

The Day the Town Trembled

Sixty years later, the municipality is to pay tribute to the heroic players from this day, including Mayor Robert Nonnet and Father Brand. 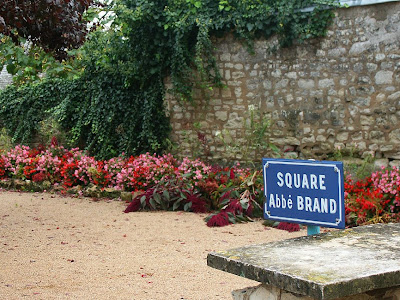 After the [Allied] landings in Normandy on 6 June 1944, and following that, in Provence on 15 August, the German army pull back towards the East and cross the region, harassed by the French Resistance (maquis) and by Allied bombing. Indian* [troops] also pass through the villages and spread terror. On 27 August, at Bonneuil-Matour, "Sikhs were running after women, entering the houses and spreading terror," said the Director of the Girls School. At Bonnes, from Saturday 26 to Monday 28 August, Indians occupy all the houses in the village and a woman is raped by fifteen of them. At Archigny, Indians and Germans steal bicycles, carts and horses. Elsewhere, they burn some houses and shoot some men.

On Sunday 27 August 1944, everything is calm in La Roche-Posay but all too soon it was announced that a German column was coming towards the village. Jacques Nonnet, 14 years old at the time and the son of the mayor, recounts: "Everyone remembers the tragic events of Oradour. Some inhabitants leave, bundles in hand, probably to take refuge in neighbouring farms. With the approach of the column along the Pleumartin road, about 6 o'clock [in the evening], shutters slam, the doors are shut. My father made us go down to the cellar, me and my older brother. Some minutes later, we hear in the street: orders, rifle butts beating in the doors, windows broken. My father went back up immediately: two German soldiers with a hostage come seeking the 'Burgmeister'. My father immediately realised that they were there for him."

Hostages on the spot and the intervention of Father Brand
Shortly before La Roche-Posay, the German column was attacked by some French Forces of the Interior (FFI) Resistance fighters near la Cataudière. In revenge, the Germans burned Renouard's farm. They are very nervous, and fearing further attacks by the Resistance, make threats to the local populace. At the Hotel du Parc, where nearly 300 orphaned students from the Herriot School are refugees, the Germans have discovered about 25 men, who are military more or less disguised as school staff. The enemy soldiers only have one thought, to get across the Creuse then the bridge at Preuilly-sur-Claise, still intact. On the other hand, they fear that the Resistance may destroy it.

Then the Malagasy** Corporal Nahola was shot; a farmer from Bouchaud, Mr Poizay, was killed; and around sixty Rochelais taken hostage. Father Brand, chaplain of the Herriot School, intervened with the Germans. He clinches a deal with the German Commandant: to contact the Resistance and convince them not to attempt any action in the night and not to destroy the bridge at Preuilly, otherwise the hostages will be executed.

Father Brand then has a meeting with Georges Butruille, one of the leaders of local Resistance, who accepts the deal. He is next brought to an isolated farm where he remains hidden. At La Roche-Posay, the hostages, after questioning, are freed: the mayor saved their lives by vowing that there were no maquisard or FFI among them, which was untrue.

The soldiers of the Elster Column finally leave La Roche-Posay, not without looting houses and having killed a young Resistance fighter from Yzeures, Jacques Martin, who had come to convey a message to his friends. They were finally stopped not very far away. ***

Translator's notes
*Several thousand Indians enlisted in the German Armed Forces because of disaffection with the British.

**Madagascar was a French colony until 1960.

***General Elster and his troops surrendered to the US General Macon on 17 September at Beaugency Bridge. It was the largest mass surrender of the Second World War. 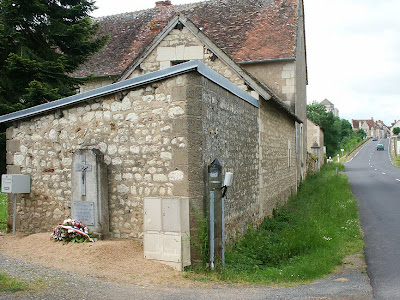 This is the grave of Jacques Martin on the edge of la Roche Posay just over the bridge on the road to Preuilly.

Susan and I were somewhat startled the first time we noticed it, just tucked by a letterbox against a barn wall on a perfectly ordinary road. It is seeing things like this that brings home to us the sacrifice made by otherwise ordinary people during the years of occupation.

The grave is not signposted - unless you actually see it when you are driving past you would have no idea it is there. Nonetheless, on 8 May a wreath was laid.

Simon and Susan,
Thank you for translating that startling piece of history. As an American I may know a bit about the larger conflicts of WWII, but the daily challenges the French faced, as their home soil was occupied, were filled with such tales of courage and sacrifice.

You're right, that aspect of what the French suffered is underappreciated outside France. It's difficult to find out about this stuff though. There are dozens of monuments like this throughout the area, but no information about them.

We have been wanting to write about this for months, but it's purely by coincidence we found anything at all on the net. I was looking for other stuff and came across the news article, otherwise it would remain a mystery to us.

thanks for this. it really is touching.

Stories such as these are indeed sad and I expect many more are unrecorded. However let me tell another story which is of my neighbour here in Village de Vaux, whose father walked every day to school at La Roche Posay. This necessitated crossing the "Ligne de Demarcation" some 1 km from here. It was manned by older soldiers, most of them farmers, and every day there would be an exchange of friendly greetings and laments about the weather. Another half a km on is a lake where in the centre stands a pagoda like structure, and during maintenance, when the lake was drained, I was able to walk over the dried out mud and take photos of two wall paintings apparently done by German soldiers and both showing rural farmyard scenes presumably of a faraway home. War is brutal, and soldiers in flight become animals whatever their nationality.

JPA – yes, one should never forget that all the protagonists are people, with homes and families of their own, and in these situations, everyone is frightened or surviving the best they can at the time. It doesn't do to sentimentalise or mythologise any of this, although I think real courage should be honored when it manifests itself.