A few weeks ago Abbé Henri Proust, emmanuensis to His Eminence Cardinal Richelieu, suddenly had an attack of populism and posted a recipe on his blog! 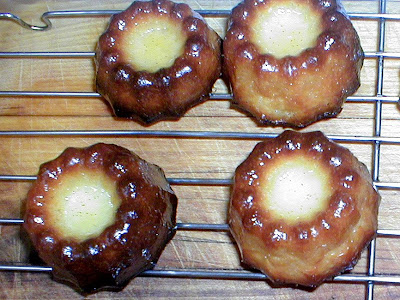 Since I happen to know that the Abbé is quite the gourmet, I thought I would try his recipe, which was for small sweet cakes called cannelés. On his recommendation I bought an 8-berth silicone cannelé mould. (Actually, I have been wanting an excuse to buy a silicone mould for something, and soft, sticky cannelés seemed like a good way to test this product. I am much more dubious about silicone's use as a flan tray, as they are not rigid, and pastry doesn't have the tendency to stick that some cakes do.) Anyway, I should have bought two, as the recipe makes 16 cannelés, but it didn't really matter, because the batter sits quite happily in the fridge.

The Abbé recommends 2-4 vanilla pods, which strikes me as rather extravagant. Use four maybe if you are reusing for about the third time, but otherwise one fresh and one being reused for the first time is fine. The trick with vanilla pods, like saffron strands, is to give them time to release their flavour. They need to steep in the warm milk for about 20 minutes. (Never throw your vanilla pods out – wash them thoroughly under the tap, pat dry with kitchen towel, leave to dry overnight. If the pod is a fresh one, I then wrap in plastic film and keep in the fridge for reuse. If it has already been reused once, then put in a jar of caster sugar, along with all the other used vanilla pods, a couple of cinnamon sticks and a handful of coffee beans. The sugar will preserve the vanilla, drying it out completely and absorbing it's remaining aroma and flavour. Hey presto, vanilla sugar, for use in any recipe that calls for sugar or caster sugar. Vanilla pods get more expensive every time I buy them, so I like to make them earn their place in the pantry.)

I eschewed the dark Navy rum (beurk !) and instead opted for a similar quantity of Cointreau and 2-3 drops of essence of bitter almonds. I also chose to go with the lower end of the suggested quantity of sugar. 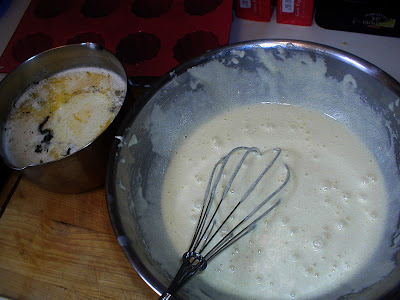 The Abbé has forgotten to mention when to add the butter to the recipe, so I put it in to melt in the hot milk. Once everything was whisked together I transfered the mixture to a jug for ease of pouring into the moulds later, and left it to settle in the fridge overnight.

The Abbé recommends setting the oven to 270°C, but this is more than our cheap 10 year old oven with its failing seals can manage. Our oven's maximum nominal temperature is 230°C, so I set it to max with an upturned cast iron pan to act as a heat sink on the middle shelf for half an hour before popping the cannelés on a tray directly onto the cast iron pan. Because of the lower temperature and because silicone is not such a good heat conductor as the traditional copper moulds, I also gave them extra time to caramelise on the outside (15 minutes instead of the recommended 6-9 minutes). Hold your nerve here – don't be afraid to let them go almost black – it's how they are supposed to be. It's a good idea to turn the tray around 90° at half time, or when you cover the top with foil, to ensure even cooking, especially in a side-elemented oven like ours. 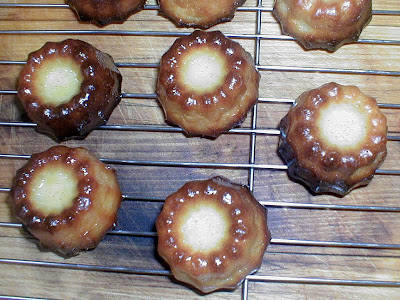 If the caramelisation has been successful, the cannelés will slip out of the moulds very neatly after their hour in the oven. Otherwise, a careful turning inside out of the mould will be necessary. 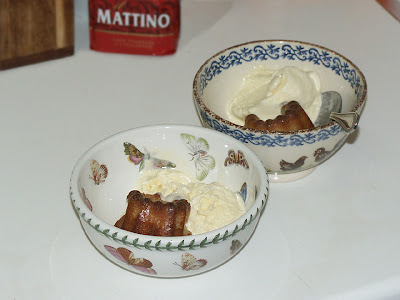 The finished product is very sweet and rich. One per serve is quite enough, especially if they come sitting in a pool of proper custard made with eggs (crème anglaise); or served accompanied by sweet dessert wine; coffee; homemade vanilla icecream (as above); or hot chocolate enriched with cream and a square of 85% cocoa solids bittersweet chocolate.

I have now had a chance to successfully use the moulds for little individual Chocolate Angel Food Cakes too – great for using up my seemingly inexhaustible supply of frozen egg whites, and to be served with homemade chocolate or blueberry icecream. (Simon thought that buying an inexpensive little icecream churn was a waste of money, but he has had to eat his words along with quite a bit of icecream and anything else I can think of to use up all the leftover egg whites I end up with once I have used the yolks in the icecream.)

Hello Susan,
We are almost neighbors! I live near Sully-sur-loire. Would love to subscribe to your blog, how do I do that?

I've always wanted to try canellis. Now I have a good reason.

Come by and visit at www.soyezlabienvenuechezmoi.blogpot.com
Best to you

Oh. My. God.* Homemade canneles and ice cream. This sounds like the ultimate. You are a dangerous inspiration to me.

Are you happy with the silicone pan? My silicone bundt cake pan was worthless. I hope there is a copper cannele pan in your future.

Also, have you made caramel au beurre sale ice cream? It's on my shortlist.

*As you know, I only say this in cases of extreme need.

Thank you for the info on vanilla pods. Now I know how to stretch mine. I used to throw them away after the first use. Well I know better now :-)

Dedene – hi there, your blog looks like it is coming along nicely. Slightly concerned about how much mess you could make with cannelé batter though, after reading your description of making pumpkin purée :-) Pacha looks like our kinda dog with lots of personality.

Carolyn – homemade icecream is well worth it. It's so difficult to get good icecream (and downright impossible if your only source is the supermarket). The caramel au beurre salé is on my list too, but I haven't made it yet. I'll use David Lebovitz's recipe when I do. I've had it once, at la Claise resto in Preuilly. Nice, but not a religious experience – probably not the right restaurant for this delicacy, as I think they buy in their desserts. Cannelés are excellent with a nice dessert wine too. I would give the silicone cannelé mould the thumbs up. Worked well for me. I'm surprised to hear that the bundt mould wasn't a success – that's the sort of thing I would have gone for. Haven't owned a bundt tin since we lived in Australia, and was thinking of getting a silicone one, for jellys as well as cakes.

Beaver – think of all the money you will save now ! :-) Good quality vanilla pods are nearly £2 each in London.

Sorry about the butter instructions; I discovered the omission when I used a print-out of my own recipe. Now corrected. I think that one can reduce that butter too, even if it isn't authentic. I have also been stretching the cooking time to get them more caramelised, they can be quite bronzé and still taste good (better even!). Try a nip from a half bottle of Bonnezeau from Leclerc with them, if the house-keeping money permits.
Must go and try them from Bordeaux and see what's what.

Dedene – sorry, forgot to answer your question. You can subscribe to our blog using the rss feed symbol in the url bar up the top, or you can add yourself as a follower.