In September Simon attended the 'open house' at the Pôterne, Preuilly's museum. He spent some time chatting on the terrace to our insurance agent, a lovely smiley lady called Marie-Hélène, who is very involved in the Comité des Fêtes and the Historical Society. She introduced him to another member of the Society as the person who had brought the exciting newly discovered Petit watercolours of Preuilly to their attention and they shook hands warmly. Chatting continued, and somehow the conversation turned to the plant at their feet that is clearly in danger of over-running the terrace. 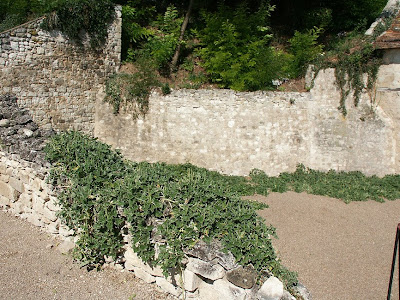 Simon tells me that they called it cornichon sauter in French. When he asked why 'Fried Cucumber', Marie-Hélène, who speaks quite good English, laughed and said, 'no, no, like jumping' (the French word for 'grasshopper' is sauterelle, for instance). The man she had introduced him to obligingly, although rather gingerly, demonstrated (wiping his hands carefully on his trouser leg immediately afterwards). The merest touch sends the seeds and a caustic liquid shooting out of the pods. 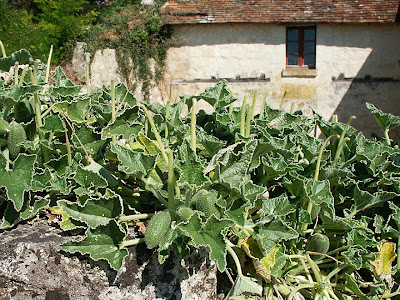 Ecballium elaterium or Squirting Cucumber as it is usually known in English is a perennial, native to Southern Europe, appearing wherever there is sandy, stony or waste ground. The plant is a member of the Cucurbitaceae family, so is genuinely a cucumber. The fruits are poisonous and were used medicinally in the past (as so often with poisonous plants, the right dose is actually beneficial, but it needs administering with a skilled and knowledgeable hand – something that is largely lost to us now). Apparently, the fruit is so strong a purgative that just absorbing the liquid from the seed capsule through the skin can have an effect. The liquid is also extremely irritating to the skin.

Because of its very effective seed distribution system, it can very easily take over an area like the terrace at the museum, and consequently, every now and then, brave souls covered from head to toe in protective gear get in there and remove as much as they can to keep it under control.

I see from looking it up on t'internet that it is usually called Concombre d'âne (literally 'donkey's cucumber' i.e. presumably meaning 'fool's cucumber') in French. 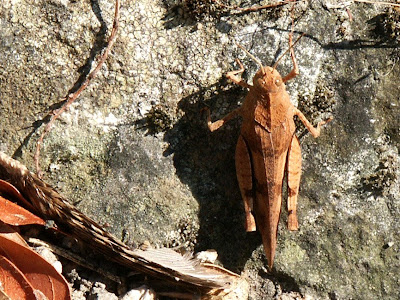 A rather stylish sauterelle, taken in the grounds of the Maison de retraite a couple of weeks earlier than the cucurbit encounter.

Dear Susan and Simon - I have been reading your blog for a couple of months and thoroughly enjoyed it... well done and thank you! Well I'm actually a biased reader as I also enjoy a country house in Preuilly (rue du Docteur Durand - actually Docteur Durand's former house - he was a GP and the early XXth century Mayor)... Hope we can meet some time when we converge to Preuilly! Bruno

Bruno
thanks for making contact! It's always good to know our efforts are appreciated.

Drop us an email next time you're going to be in town, it would be good to meet up.

Hi Susan and Simon, this web page says the plant you describe is called the cornichon sauteur or concombre du diable. I've seen them here in a friend's garden but I didn't know the name. Why do you think somebody would grow them in a garden?

Ken:
They're very invasive (I don't know if you would ever get rid of them) but I bet all the local animals know the plant isn't good news and stay well clear. So maybe your friend has the plant around their chicken run to keep foxes away?

Just a thought, probably not a good one, but I have no idea why anyone would actually deliberately plant this. Unless theyre a witch :¬)

Ken – thanks for the proper form of the name. I had a feeling 'sauter' was not quite right. I too have seen it called concombre du diable in some references.

Like Simon I wonder if it is used to guard something – maybe keep the rabbits away from the lettuce or similar. I think the most likely explanation is that it came for itself, or that what you saw was some edible lookalike. Cucurbits do all look fairly similar.