A couple of months ago, Mike and Cally Vaile got in touch to say that they had some 19th century watercolours of Preuilly. One thing led to another, and the two watercolours now have a loving new home in Preuilly with Bernard de la Motte, President of the local historical / archaeology society.

Mike and Cally have very kindly sent us some more photos taken on the day they came to town with the watercolours. 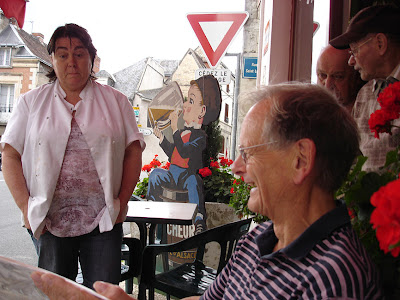 Here, Mike is showing one of paintings to Jeanine, the landlady at l'Hôtel de l'Esperance. On the right are two of her elderly regulars, keen to get a look at the paintings and offer their comments. L'Esperance is directly across the road from the Abbaye St Pierre, the subject of one of the watercolours. 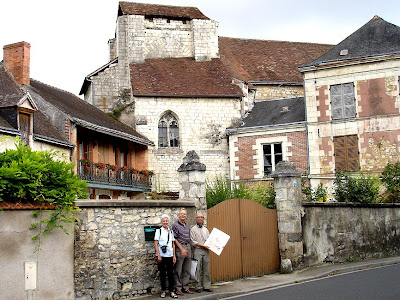 This photo shows Cally, Mike and Bernard in front of the subject of the second painting, l'Eglise de Notre Dames des Echelles. 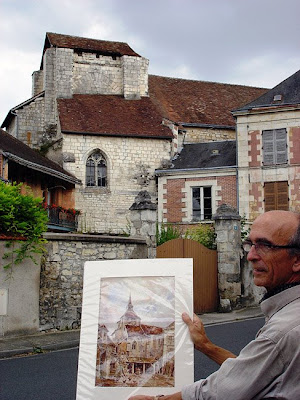 And finally, our favourite photo, of Bernard holding up his new acquisition, in front of the very scene it depicts. He must be standing in virtually the same place as Petit did to paint it.

PS Congratulations to President-elect Obama. He's clearly a remarkable man, very impressive and charismatic, and has won his place in history. All our American friends are over the moon happy. I hope he and his family can stay safe. I hope he remembers that there are lots of people out there who knew him when he was Barry. I hope the rabbit doesn't bite off his finger when he tries to pull it out of the hat. I think it won't necessarily like the change when it comes. I wouldn't have his job for the world, but I am glad that my American friends are so positive and energised about his election. I'm really hoping that they, with this inspirational new leader, can restore America's dignity and credibility as a great nation full of well-educated, well-informed, open-minded, insightful, grounded, intellectually curious, compassionate, enterprising, audacious, laughter-loving, outward-looking people who discourage bullying and fundamentalism on every level. Electing the man is only the first step of many. Bonne continuation !
Posted by Susan at 10:00

Love the paintings, and thanks Susan...I hope the same thing! I think Americans (generally) ARE how you described us, but with a leader like W how can other countries see past him? Thanks for the vote of confidence! (Pun intended ;-)

Thank you for the hope, the wonderful description, and the encouragement. I had voted for McCain, but was as nearly excited to see Obama become our 44th President. I loved the sense people from both parties had of re-energized patriotism. That, of all things, was the boost that was most definitely needed.

Thanks for your kind words and well wishes. Obama is an inspiration to so many Americans. It's good to touch base with our ideals again.
Carolyn