I realise that I am probably not the best person to be writing a post about this. Neither, for that matter, would Susan be. Really and truly, the person who needs to be writing this is Jill, who is a brocante fan - or John, who works very hard at giving the impression of being a brocante martyr.

Each year, just about every village in France holds a brocante/vide brenier: brocante is second hand stuff, and vide grenier is attic clearance. These happen all year round, but the pace seems to pick up around late summer and autumn. Preuilly's is in August, and in 2006 was the first vide grenier we ever went to. We weren't all that impressed, to be honest (we wrote about it here), and I think Susan is yet to find one that does impress her.

They are a real slice of French life, though. It is amazing what people have in their attics and try to sell. I am sure people never throw anything out, but keep it all for that one day of the year when they try to dispose of it for cash. Second (or third or fourth)-hand stereos, toys and free "gifts" from cereal packets, furniture that is more woodworm holes than wood, and old (but only just old enough not to be back in fashion) clothing seem to make up the majority of stalls, but there are always one or two items that you look at and consider.
It's not all junk for sale. These two were really tempting 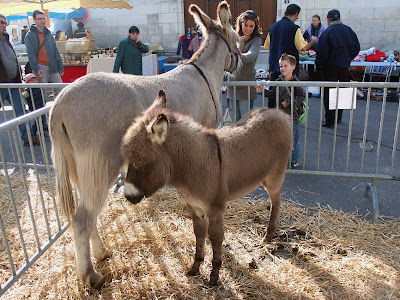 I like the tables full of old tools. Of course, there are always plenty of second hand electric drills from the 1960s at a price higher than that of a new drill from M. Bricolage, but we have seen lots of really old hand tools, many of them apparently hand made as well. We may have to buy one or two of the more rustic looking as decorator items.

This year the only brocante Susan and I made it to together was at the Fête du Lait in Ligueil, where these photos were taken (I also managed to get to the Goose Fair in Martizay at Easter, and the Rotary Brocante in la Roche Posay in August). Most of the brocantes are ostensibly an addendum to a traditional fair, but in effect they have just about taken over most of them. At the Milk Fair in Ligueil the only evidence of the milk trade we saw was a dog drawn milk cart. 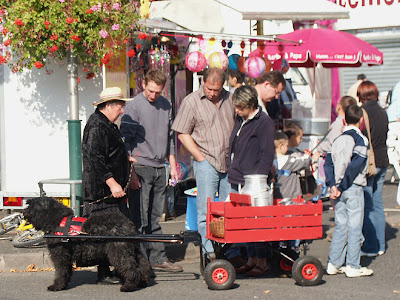 I always feel a little uncomfortable taking photos at these kinds of events, so photos are few and far between. I couldn't, however, resist taking a photo of the man we saw buying a pool cue before realising he had to get it home somehow. There was no way I was going to take a photo of him by the side of the road exploring his options whilst putting on his bike leathers, but once he was looking the other way... 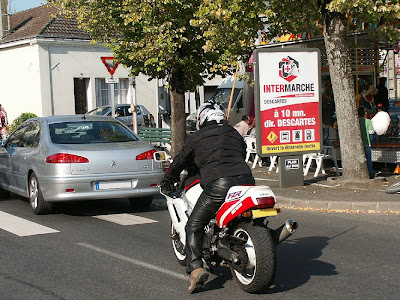 Maybe in future we will have to post low quality photos taken with Susan's phone. For some reason, snapshots can be taken with phones when cameras make people feel uncomfortable.

For Brocante fans, there is a list of upcoming markets here

I can understand the temptation to go home with a couple of donkeys. I just came from the vet, getting medicine for my sick dogs and had to talk myself out of taking home a very cute abandoned kitten. A kitten of course would be easier to deal with than a pair of donkeys.

I've just discovered your blog btw,and enjoy it very much. I'm Australian and dream of one day having a life something like yours.

Michelle, I almost bought a donkey at Easter as well - when Susan wasn't there. That would have gone down even better. The things that stopped me were : not having anywhere to keep a donkey, having to take it home in the back seat of the car, and not being around every day to appreciate it!

Welcome to the blog

Yes, I've always found it a bit of a challenge fitting a donkey into the backseat of my car too.

I tagged you on my silly new obsessed with France blog. I have about four readers so I hardly think your server will collapse with the rush to come on over and see who you are. But, you never know. Really I picked on you because maybe you are Australian couple in France, and that is good enough for me.