The River Claise from the Footbridge

You might recognise this photo as being where our blog title picture comes from. It was taken on the evening of 15 February 2007. 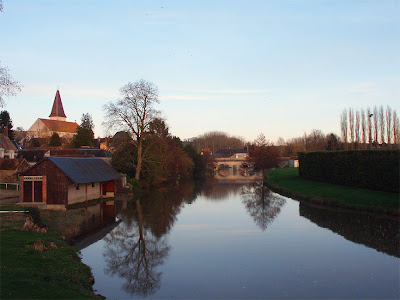 This second photo was taken mid afternoon on the 22 April 2008 from exactly the same place. I wrote at the time how much it had rained. 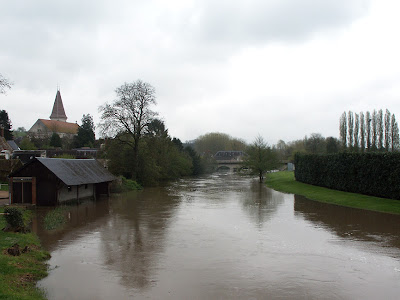 The footbridge in the post title is the one near the swimming pool - here on Google maps*.

*This link may, or may not work. Google have recently changed the way that Maps is navigated. As usual with software, they have apparently changed the way you operate something without changing what it does. In future, I would like every car manufaturer to shuffle the pedals every time a programmer buys a car - and maybe hide the steering wheel while they are at it. If an Austin 7 from 1922 and a Bugatti Veyron from 2006 can have all the basic controls in the same place, why should the controls in version 3.1 be so different to version 3.0 when it comes to software?
Posted by Simon at 10:00

I agree 150% with you on software. It's what they call "New Improved." You see that on every product and what else in the US. As a consequence, the way I see it, your computer will be completely useless in the near future with so many "improvements!" Mac used to be "plug & play". Now it is "plug and be frustrated!"

If only we ruled the world...

Word verification is satio. Sounds like the sort of comedy name Frankie Howerd would come up with for a man who has too much of evrything

Can't help writing a message since the word verification is "perform". Anything to do with software?