I've decided to start an occasional series called 'Fun with French', to feature the curious and entertaining aspects of learning French. I haven't suddenly made a great leap to total fluency – indeed my ability to form a complete, grammatically correct sentence, hold a conversation or craft an email in French remains stubbornly and pathetically inadequate (mainly because I don't get the chance or don't make the time to practice – although I have just written my first report in French, of which no doubt heavily edited excerpts will appear in due course in the Réserve Naturelle de la Chérine's annual report, but my bit's about flies, so no one will read it anyway...).

I still translate everything from English into French to speak and from French into English to listen (making composing my responses even more challenging). However, I read in French nearly every day, and can now do so almost as quickly as in English (note I read quite slowly in English – it drives Simon to distraction that I read all the words. He is a superfast skim reader.) So, I am picking up snippets that engage or amuse me all the time, which I would like to pass on. Also, I am hoping that our French speaking readers will be moved to contribute via the comments section, and it could be quite a lively addition to the blog.

Today's word is queue. In English, of course, this is the word describing a great national sport, an activity with rules that are simply too subtle for the foreigner to pick up (read Kate Fox's 'Watching the English: the hidden rules of English behaviour' if you want some insight). In English it is pronounced 'kyew', and I had no reason to suspect it was any different in French, although I did know it meant 'tail' and I didn't think it was used to describe an orderly line of patiently waiting people. (Actually, I'm not quite sure what word the French use for this – probably just ligne or maybe file I suspect.) 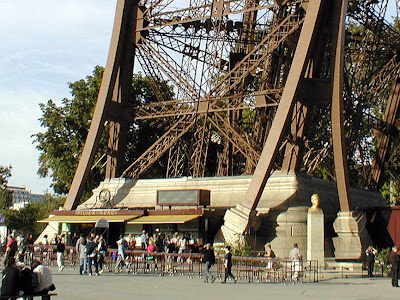 [Simon's note: I believe the French for "a group of people waiting to do something" is "scrum". The French don't do lines, except at the base of the Eiffel Tower.]
One day Simon and I were sitting having a beer in their kitchen with Sylvie and Pierre-Yves, who are our neighbours across the road. Pierre-Yves is a pianist and Simon was telling him that we want to buy a grand piano. As Pierre-Yves speaks English, but Sylvie does not, I was quite pleased with myself that I knew the French for grand piano – piano à queue. (At this stage of the story, I imagine all you French speakers know what is coming...)

Sylvie's reaction to this piece of information was to nearly fall off her chair laughing and start slapping her rather shapely behind. Queue, in French, is apparently pronounced 'keh' – and, you guessed it – the word that is pronounced 'kyew' is cul, which means 'backside'. Fortunately for my self-esteem, Sylvie is such a nice person that I didn't have the least problem being the butt of the joke and there was a bonus – I immediately realised that the French drinking salute, cul sec, must mean 'dry bottom' i.e. the equivalent of 'bottoms up'.

And let's not forget, in the US, a normally desirable, pricey, and much sought after location for a suburban home is know as a cul-de-sac. If only those haughty suburbanites knew they lived on the bag's ass...

And la queue has a slightly naughty slang meaning, which you can probably guess...

We had a interesting experience on our first big motorway trip. For about a 100km we kept seeing overhead signs for a "bouchon" but couldn't figure out what it meant. Eventually we came around a corner and caught sight of the massive traffic queue and we put the phrase book away.

To "stand in line" (as we say in American English) or "queue up" is faire la queue in French. French doesn't use the terms ligne or file in this sense. A file is "a lane" on a highway or road. And then the verb filer means "to leave." Filer à l'anglaise, "to leave, English-style," means "to take French leave," I understand. We don't use that last expression in American English. It would mean "to turn and leave without saying good-bye," I think.

We also say" file d'attente" in my part of the world and I remember growing up on the island the nuns at school used to say, in the morning, " mettez-vous en file indienne". As a kid, I thought that, because the island was colonised and the nuns were from Europe, the word "indienne" was in reference to India but later in my cours de Francais, I learned that the expression came from the way North American Indians used to walk sometimes, in formation.

I guess in France the equivalent was "a la queue du loup" .

PS: I love the word verification. Today it is mortrac!And it was "mort" dead in it's tracks.
The new one is facismak; will it work this time?

"A la queue leu leu..." that means to walk in line. According to my sources, it comes from "à la queue du loup." Leu, lou, forms of the latin "lupus."

Walt – not only are the French laughing at the suburbanites' address, but the British are laughing at them too because they are all wearing their designer fanny bags when they go abroad.

Don – it's so apt though that the French for traffic jam means 'cork', isn't it?

Ken – is that what to take French leave means? I've heard the expression in English, but never knew what it meant. Are you sure filer à l'anglaise means the same thing and not the opposite? Don't the French joke/complain that the English make such a meal out of saying goodbye, prolonging it endlessly in a most unnecessary and embarrassing way.

Beaver – thank you, file d'attente was the expression I was thinking of.

C-H – are you going to write down your experiences of the Occupation? I've never understood how people had time to do all that queuing for food at this time. Obviously you had to, but people had fulltime jobs as well. I don't know how they managed. Anyway, thanks for the useful thoughts on why one might choose to use file d'attente and on Indian file (good point regarding movement or lack of).

Susan, this from the Collins-Robert bilingual dictionary:

It's funny how the English and the French think the other people are rude by leaving without saying bye. It must be a language-barrier thing.

Word verification string is "muckw" — all mucked up.

I was talking to my mother today, who said that she understood French leave to be less "leaving without saying goodbye", and more "not turning up at all".

I suppose I have heard the expression, but I doubt if I've ever used it