The Story of Badoit

Badoit is my fizzy water of choice. It is a naturally gassy mineral water brand in the stable of Danone products (the gas is also augmented with carbon dioxide). The water is extracted from several springs in the commune of Saint Galmier, in the département of Loire.


In the bar at the Hotel Restaurant de l'Image in Preuilly. 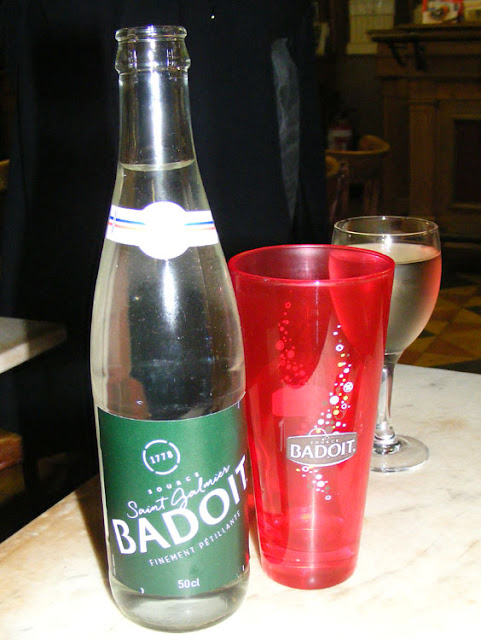 The springs gained a reputation in the 18th century for being 'appetizing and exhilarating' and the royal physician promoted them. It contains bicarbonate of soda, calcium, sodium, magnesium (in significant quantities), potassium and silica, with a pH of 6.


The main spring was known in antiquity and the Romans build a spa around it. In 1837 Auguste Badoit acquired the lease on one of the springs, which he ran as a spa. By 1845 he was buying up the other springs, in order to prevent competition. A couple of years later, with the lease not renewed on his original spring, he closed the spa and decided to concentrate on marketing the bottled water. When he died in 1858 he was selling 1.5 million bottles a year.


At the big Auchan supermarket in Chatellerault. 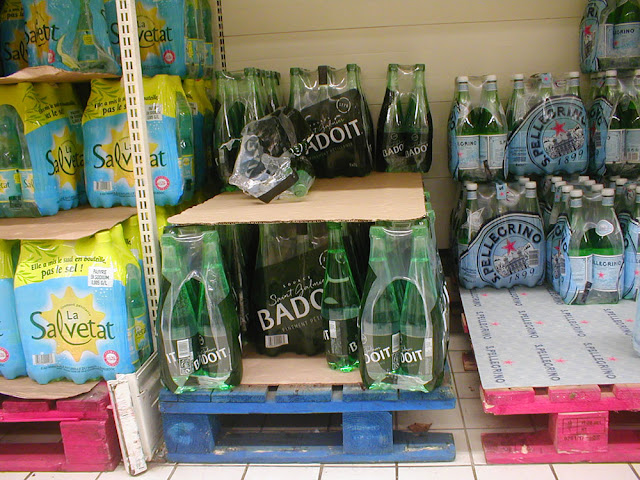 His wife, daughter and son-in-law took over running the business. The bottles in the 1870s were stoneware ceramics, corked and sealed with wax. They carried a green label to prevent counterfeit products on the market. The family bought the main springs in Saint Galmier at this time, and introduced a half size bottle for the Paris market.


In 1883 the business vertically integrated by buying a glass factory and making its own bottles. This saved them money on transport and purchasing. They also bought several more of the local springs soon after and became a limited liability company and the therapeutic attributes of Badoit spring water were recognised by the Academy of Medicine. Consumers bought their Badoit in the pharmacy.


On the shelf in the Episervice corner store in Preuilly. 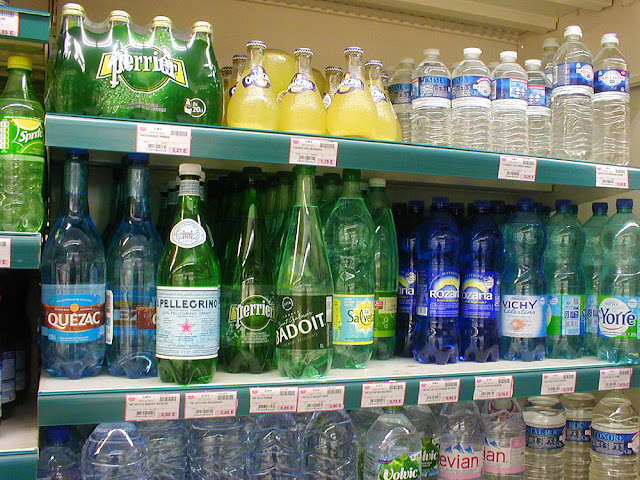 Corks were replaced by crown caps on the bottles in 1913 and by the 1950s Badoit had escaped the pharmacy and was available in supermarkets. Sales really took off, with production at 37 million bottles. Then in the 1960s they merged with Evian and production reached 57 million bottles. In 1970 Evian-Badoit was bought by Danone. Sales plunged to 1950s levels. The move to television advertising and PVC bottles turned the tide (glass bottles were now reserved for restaurants). Bottles got screw caps in the 1980s, became the now familiar translucent green and the first of the flavoured waters were introduced (mint and lemon). Sales skyrocketed to 240 million bottles.


The bottles became PET in 1999 and Danone sold the glass factory. Extra fizzy Badoit in red bottles appeared in 2004 and in 2007 the 750ml bottle was introduced. Sales reached 300 million bottles.


Today Badoit produces a million bottles a day and have 12% of the French natural mineral water market.

Our favourite also.... the red is good for a fizzy drink with some Pulco... cordial for adults!!
This article from The Planet Bottle shows how the potential of those 1,000,000 bottles a day.... if recycled!
http://www.theplanetbottle.net/what-is-pet.html