A Hundred Years Ago

Yesterday all over France people gathered together to honour the memories of those who died in the Great War, and to acknowledge the sacrifices and hardships endured by every family in the country. 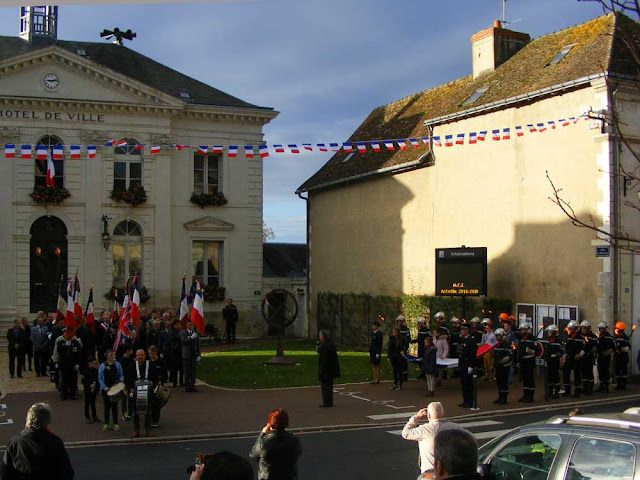 The proceedings in Preuilly began at 9am outside the town hall. A crowd gathered around a troupe of drummers, flag bearers, local representatives of various associations and the fire brigade. A member of the British expat community carried a British flag. I had hoped to carry the Australian flag, but our flag is a full sized version, designed to be flown from a big flagpole. Protocol didn't allow for it to be paraded.


From the town hall we marched down to the abbey where more people were waiting. The crowd was invited in to take their seats and the drummers and flagbearers processed down the aisle to take up their places at the front either side of the altar. 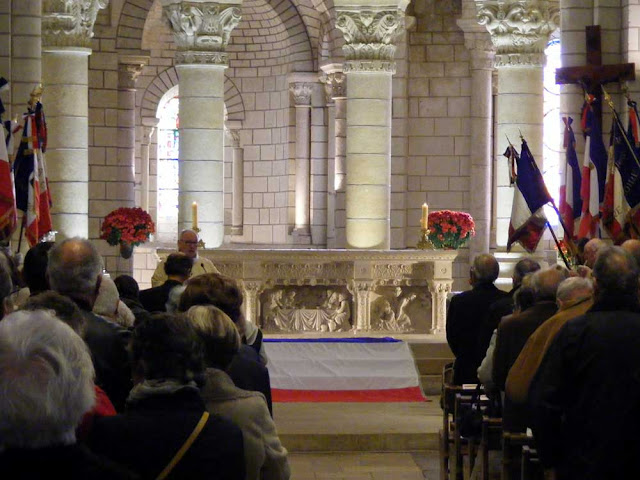 Various people gave readings, and hymns were sung. The college (junior high school) student was particularly impressive, confident and clear. The priest gave a short, very good sermon, reminding everyone that the day is also Saint Martin's saint day and that here in the Touraine that is particularly relevant. He managed to get in a mention of the thousands of migrants 'knocking on our doors' and how we should share and care, like Saint Martin, without taking anything away from his message about honouring the memory of the war dead. The abbey doesn't have an organ, so the local chateau owner plays guitar to accompany the hymns. The acoustics and singing were beautiful. It seems no one in Preuilly sings like a bullfrog and the community just naturally harmonises. Lovely, and genuinely moving.


After those who take communion did so we moved on to the war memorial, for speeches and wreath laying. Gérard Thoreau, deputy mayor, spoke about the contribution of the British, his quiet way of recognising the local expat community. Fabrice Doucet spoke about the seven new names on the memorial, the result of his research in tracking down those who had been inexplicably or inadvertently left off. Seven men who died at different times, one in the first year of the war, another of wounds after the war had ended, and in different locations -- the Meuse, Verdun, Syria... All of them had been born or lived in Preuilly although some had worked in Paris. One was a priest, two of them lived at the top of our street. 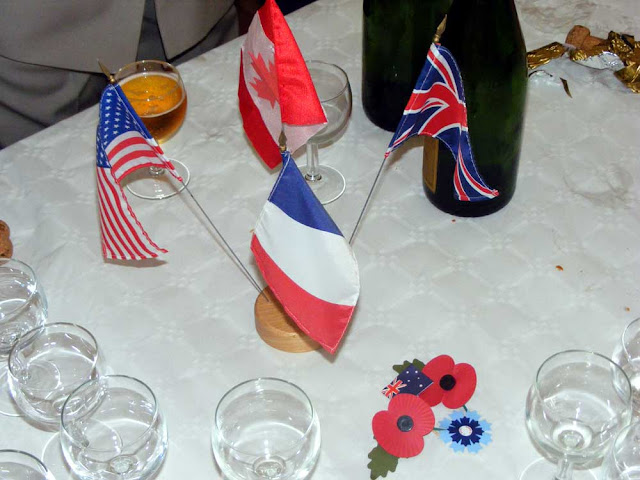 Following the ceremony at the memorial everyone moved on to the salle des fetes for drinks and nibbles. I donated some little cocktail Australian flags for the table decorations. Several people asked me what the stars on the Australian flag signify. They guessed the States, but no one had heard of the Southern Cross.

Last Friday, Theresa May came to Albert to meet with President Macron and go together to the military cemetery and memorial in Thiepval, between Albert and Péronne, to commemorate the British and South African soldiers lost in astounding numbers in the Battle of the Somme. Couldn't she afford another trip in France?

Two links to this visit, here and here.

A few years ago, I went with Ken to Thiepval, and other iconic places, on a tour of the Somme battlefields initiated and guided by the curator of the Alfred-Danicourt museum in Péronne. It is an enormous memorial worth the visit. The whole tour was an extremely moving experience.

To be fair, the ceremony at the cenotaph in London is important...

The PM and senior royals are always expected at our own remembrance event in London, so she sent her deputy to Paris. It must be a nightmare for the protocol experts, since you can't have everybody of sufficient seniority at everyone's event at the same time. This year the German President was invited to lay a wreath at the Cenotaph as well - I have no idea how Germans might have felt about the absence of both head of state and head of government!