An Article About Me in the Local Newspaper

An article about me and Brexit was published in the local newspaper La Nouvelle République on Sunday. The journalist Xavier Roche-Bayard came to see me after I emailed the paper to say I'd been on the demonstration in London the weekend before. We talked for an hour and a half, covering a wide range of topics, but mostly discussing Brexit. I have translated his article below.


Xavier Roche-Bayard, a journalist with La Nouvelle République, based in Loches. 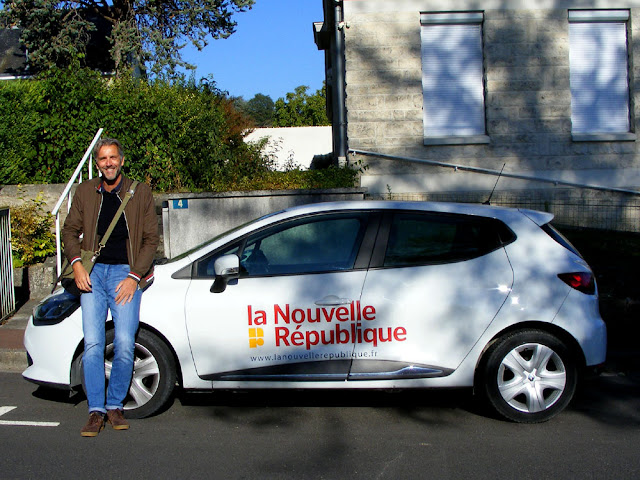 Susan Walter, a Britain more French than English after Brexit

Susan Walter demonstrated last Saturday in London against Brexit. Settled in Preuilly sur Claise for 10 years, she expects to apply for French citizenship.


She has two nationalities: that of her country of birth, Australia, and that of her adopted country (and of her husband, Simon Brand), England. Next year, for their sixtieths, Susan Walter envisages applying for a third nationality -- French. "If I have to choose, it will be Australian and French. I will no longer be English. In France there is everything I need to live, to work, for my rights, to be able to cross European borders. We've asked for a permanent residency card for after Brexit. Our income tax declarations are important for establishing our residency in France," she says in impeccable French.

"We even thought that the leaders of the Brexit campaign were joking."


Ten years ago she quit her job with the National Trust, a British institution charged with the preservation of historic monuments and sites of interest (more than 300 buildings and 200 gardens).


This lover of history has lived ever since in Preuilly, where she has developed a tourism business in the country of the Loire castles for anglophone lovers of history and French gastronomy. "Brexit wasn't even an idea that existed at the time in my business plan. It was a shock in June 2016 when the vote was to withdraw from the European Union." She couldn't believe Brexit would be carried. "The arguments 'for' were so exaggerated, ridiculous, lying. It seemed impossible. We even thought that the leaders of the Brexit campaign were joking." One of those British dubbed the "urban elite, because I come from London" (a city where the majority voted against Brexit), she and her husband got in their car to join the anti-Brexit demonstration in London last Saturday. "In March 2017 there must have been a hundred thousand. This time they are saying 700 000, but I would say a million people. The ambiance was good, the police were smiling. At the end there was a party in the streets."

Me at the demonstration in London. 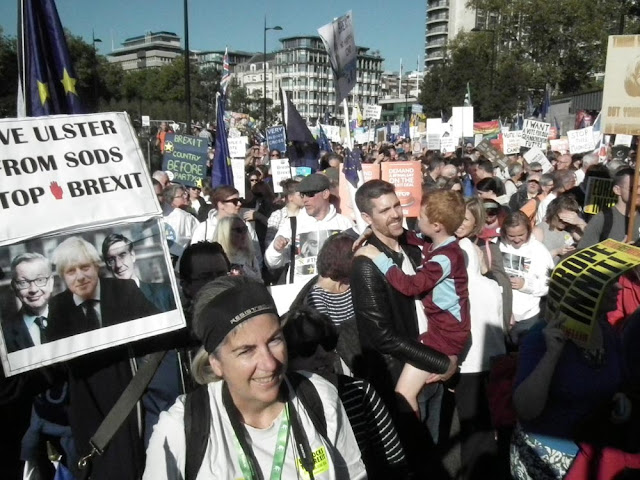 For her "it's clear, many British have changed their minds. They voted 'for' and now they see the negative consequences, like the loss of markets... Many farmers think that Great Britain will offer subsidies in place of the European Union. I am sure that this will not be the case."

Susan Walter regrets especially the harm that has been done. "My husband says that at the base of Brexit is racism, against Muslims, Poles and West Indians. In Great Britain there is this expression -- 'hostile envronment' -- because the ambiance, the atmosphere has really changed." The 29th of March at 11 o'clock, the day Great Britain leaves the European Union, "I will be nervous, agitated, I'm sure," Susan Walter imagines. Her regret -- that Britains abroad don't have representatives, outside of the consul, to make themselves heard. "In France, you have this, you can vote. Lots of British in France, after 15 years, no longer have the right to vote." And ask this question concerning numerous French villages: "What will happen if the British leave and put all their real estate up for sale?"

In "impeccable French." That must have pleased you. Somehow. some way there just has to be another vote.

It was a nice compliment (very French), but as there is no way my French is impeccable, it made me laugh. Nevertheless, I emailed the journalist to thank him.

There doesn't have to be another vote. The British government could still just pull the plug on the withdrawal without another vote. It's not gonna happen though. I think a 'no deal' withdrawal and a round of tit for tat citizens rights squabbles is increasingly likely. It is getting really stressful.