Over the weekend France erupted into national protests over increases in the tax on fuel. Part of the tax is an increase on the already existing carbon tax on petrol and diesel. The other increase is specifically on diesel, designed to bring it up to the same price as petrol and to wean people off diesel vehicles. It is bitterly resented by many people because not only is it an increase in the cost of living, but up until recently we were all being encouraged to drive diesel. These taxes represent 60% of the price you pay at the bowser. Overall the fuel taxes are used to fund environmentally friendly projects and the transition to greener technologies. Research shows that carbon taxes work, at least from the point of view of reducing consumption of non-renewables such as fossil fuels, so it is an obvious and responsible policy for the government to be pursuing.


The new tax is also being used metaphorically by protesters as a cudgel to beat President Macron. It has become a symbol of a myriad of little discontents and distrust of Macron. Many people find him too monarchical and too closely allied to the bankers. Doubtless, when the smoke from the burning tyres on the blockades clears, we will learn that this civil unrest is being stirred up and manipulated by an unholy alliance of the Far Right and the Far Left -- our old friends Le Pen and Mélenchon, with Asselineau and Wauquiez cheering in the background.


The extent of the protests encountered by me personally. 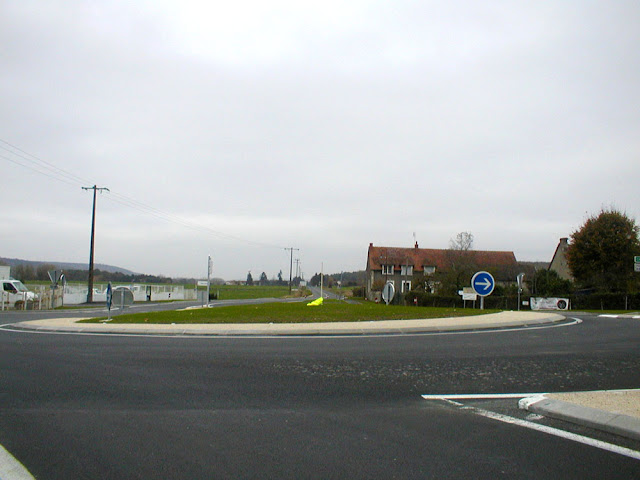 Consequently, around 125 000 protesters at a thousand locations across France put on their gilets jaunes (hi-viz vests) and blockaded strategic routes on Saturday. They caused considerable distruption and annoyed a great many motorists. Lots of people stayed at home because the protests were widely advertised beforehand, but not everyone can put off a journey or take a different route.

Their tactics were to choose a main road with a pedestrian crossing, which they took turns to stroll across. Cars were allowed through at intervals of one every few minutes and only after the drivers had been strong armed into signing the petition against the fuel price increases. They have been widely reported as behaving aggressively and threateningly, repeatedly banging on cars in a way that thoroughly unnerved the occupants.


To my horror, a protester was run over and killed by a frightened motorist in Savoie, and a couple of hundred others were injured in similar circumstances. The protesters had no qualms about burning tyres and inconveniencing the driving public (who, logically, you would have thought they would want on their side...) It seems to me they just wanted an opportunity to express more general dissatisfaction, discontent and frustration and that the fuel tax is just an excuse.


Personally, as someone who lives in a rural area, exposed on a daily basis to an invisible toxic fog of diesel fumes and ammonia from uncomposted muck spread on the fields, I'm glad of government policy that steers people away from diesel and offers positive incentives for buying an electric vehicle.


The Gilets jaunes take their name from the hi-viz vest that all motorists in France are obliged to carry. I'm pleased to see that there is a burgeoning Gilet vert (green vest) movement, with a thoroughly sensible, if idealistically optimistic, manifesto. They say:


The protesters like to claim that the price of fuel in France is amongst the highest in Europe. It's true French fuel prices are above average, but they are by no means the dearest. That prize goes to Italy and Sweden, and five other countries are dearer than France. Luxembourg and Spain are the cheapest.


The protesters like to claim that the level of tax on fuel is too high in France. They should try living in the Netherlands, the UK, Greece or Finland, all of whom have higher taxes on fuel. In fact everywhere in Europe, apart from Bulgaria, the tax component of the price at the pumps is more than 50%.


The protesters like to claim that fuel forms too big a percentage of their annual budget. France is ninth on the list of the 28 countries in the European Union in terms of percentage of income spent on fuel. French wages are much higher than in Eastern Europe, so even though fuel prices are less there, a Bulgarian, Romanian or a Hungarian on an average income can afford a quarter of the fuel that an averagely paid French person can.


In our area, 400 people blocked the bypass at Loches, causing SuperU to close up shop for the day and people to avoid the market. No one was hurt, but there was a close call. A dozen people gathered in Le Grand Pressigny but that's as close as it got to us (ie the neighbouring small town). Overall 1500 people were out on the streets in Indre et Loire.

Macron has largely ignored the protests, or at least, commented very little. Initially he called on the country to 'respect the anger' of the protesters and avoid travelling on the day of protest. Since then I don't think he has personally commented in public at all. His approval rating has dropped to 25%, his lowest ever, and the Prime Minister Edouard Philippe has also dropped, to 34% popularity. According to Le Figaro 74% of French people supported the Gilets jaunes movement on the eve of the protests.

The protests continued in some areas through to Monday.
Posted by Susan at 09:00

Any increase in tax on fuel goes straight into the big pot of money that is spent on our behalf. There is never any question of earmarking the money to be spent on green or any other good cause. This is my main complaint. So Macron is as popular as Trump?

I hope Macron doesn't back down. In a recent interview with Fareed Zakharia on CNN, he pointed out that he received a 5-year mandate from the voters in 2017 and has no mid-term election to contend with so he is in a position to remain steadfast on reforms.
If I remember correctly the last big protest was about changes in the railway in order to make it more competitive as EU reforms approach. Has he proceeded with any success in that endeavor?

Makes our own hlme-grown demonstrations look quite tame by comparison.

Except that there's always one:
https://www.viedemerde.fr/article/ce-gilet-jaune-a-manifeste-tout-seul-au-milieu-d-un-carrefour_293738.html

The railway workers have more or less backed down. He just waited them out.

Carbon taxes work by providing an incentive to reduce consumption. In a way it doesn't matter if they are ring-fenced for green projects.