A Calfs Head on a Plate

Boned and rolled calves heads on special at the supermarket.

There are several traditional French dishes which are very much an acquired taste. Escargots (snails) of course, but also andouillette (sausage made from pork intestines), gésiers (chicken gizzards) and tête de veau (calf's head). There are probably others, but you don't see them so frequently (for example, you virtually never see frogs legs).


Snails ready to heat up. 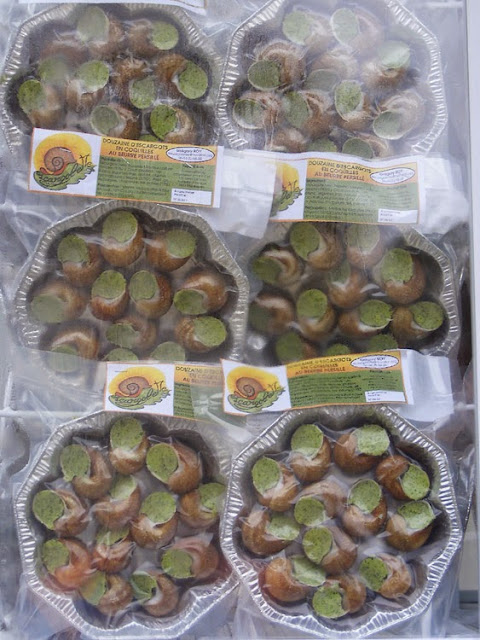 Snails are edible but on my 'why would you bother' list (sorry Greg). I have eaten them several times, and not just with the garlic butter that they are so famously served with. I've also had them as a sort of paté spread on toasted baguette, as well as served 'chasseur' style, with mushrooms and red wine. Frankly, I couldn't tell the difference between the snails and the mushrooms in the rich sauce.


Then there is andouillette. The all pervasive pong will put most people off before they take a mouthful. I'm not a fan but have eaten it occasionally. Even about half of French people don't like andouillette.


A packet of gésiers from my freezer. 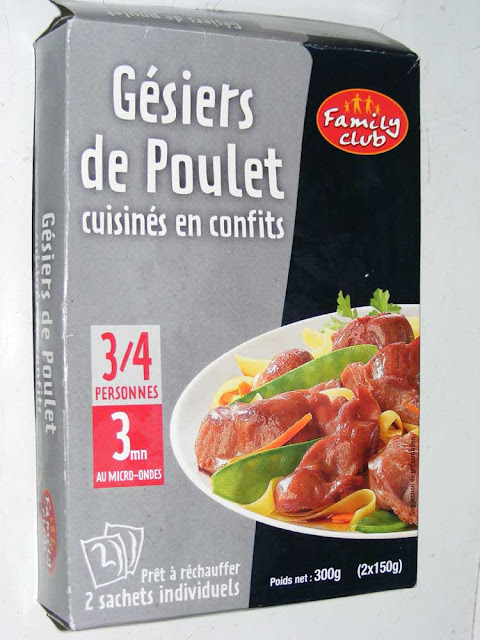 Gésiers I love and always have some in the freezer for adding to salad lunches. I first encountered them in a restaurant in Saint Junien, in Haute Vienne, on holiday, didn't know what they were, so ordered the salad with them in just to find out. I've been a fan ever since.


On the left, sliced cooked tête de veau in sauce gribiche, ready to heat up;
on the right, andouillettes. 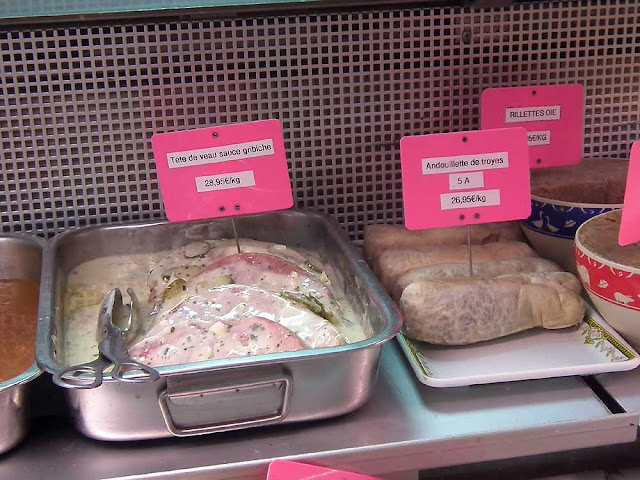 And tête de veau. It is as unappetizing as it looks in the top photo, even cut into slices or bite sized morsels and served with vegetables and a sharp flavoured sauce as shown immediately above. The texture is gluey jelly as there is so much slow cooked connective tissue to chew through.


I applaud the French nose to tail approach to eating and their determined championing of these old and frugal dishes, but tête de veau is to be avoided if possible. To make up for it I am more than happy to eat kidneys, tongue, liver and brains, all of which I can buy from a specialist butcher who does nothing but offal at Loches market.


My local specialist offal butcher, who tells me that November is 'Offal Month' in France. 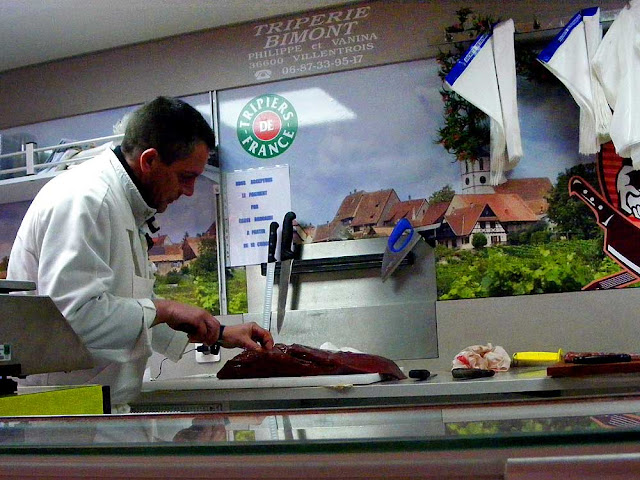 I love andouilette... it's just chitterlings in a tube!!
There is nothing at all wrong with eating the guts of an animal.... in this case the all the guts... the only one I have difficulty eating is the rubber band version... because it gets between me teef!
And Pauline, unfortunately hates tripe... perhaps my favourite bit of cow gut... white tripe, the furry one, cooked with milk, onions and spuds.
I like the French one with carrots, now, too... and then their is the mammary.... cows udder... that I will pass on... it is a Northern delicacy, but also sold here in France...
It tastes fine... it is the look that puts me off!!
Rather like your post on ceps... there are some colour combinations that can't be eaten comfortably... even as "shut up and eat it" food....
Orange and Purple... noooooo!

One thing we did notice was the cost of Offal in France. It is so much more expensive than in the UK. When we bought lambs liver it was usually 5 or 6 euros in the UK the same amount would be £0:80. I personally dont like snails or andouilette or heads of anykind! C

That's a result of nose to tail eating. Prices even out overall, so that 'waste' like offal is a bit more expensive, but prime cuts are less expensive. We paid a couple of euros for two slices of yearling beef liver yesterday from the specialist butcher.

These days I will eat tripe if it's done Provencal or Italian style. For years it was one of the few things I wouldn't touch, because of having seen it prepared in the abattoir whilst a hospitality management student.

I'll happily eat snails but do no like gizzards.... I much prefer liver. No to the andouille and the head. Not even at the same table, please. The only place I have seen frog legs is in a Chinese buffet.
When we lived in Ireland, whole pig heads were on offer at Easter. The first time I saw them I thought they were a rather bizarre plastic decoration.... Then the butcher picked one up.... Again, no.

A Chinese buffet is the only place in France I've seen frogs' legs too. I would have been able to buy pigs' heads in London at Borough Market, but never did. I saw others doing it though. The butcher would saw them in half.