One of our favorite places to eat is the Hôtel Restaurant L'Image, a 16th century relais de poste (coaching inn) which is on the market square in Preuilly. We have been meaning to write about it properly for ages, but never quite got around to it. The hotel is run by the Chedozeau family and the family aspect really shows. Brothers Jean-Michel and Christophe run the hotel and restaurant with their wives Martine and Sylvie, and three generations of the family, complete with kids and kittens, is often to be seen.
Christophe and Jean-Michel after work 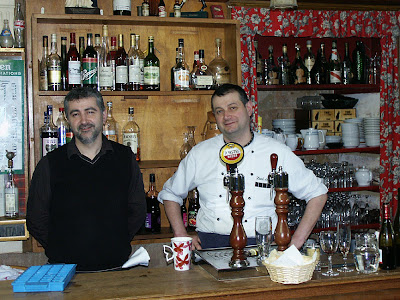 We first ate in the restaurant on Mothers Day (Fetes des Meres) in May 2006 and Susan was presented with a flower. It's the little touches like that which makes it feel special. When you are camping in a cold house, being in a warm room with good table linen and flowers on the tables really raises the spirits. Even from the outside, the hotel casts a welcoming pink glow across the Market Square through its beautiful etched glass, which really appeals on a winter's evening. 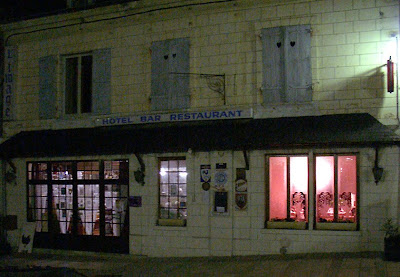 Since then we have eaten there many times, including two Safran Faires, for which Jean-Michel prepares special saffron inspired menus. This year the highlight for me was an entree of seafood in aspic with a saffron mayonnaise. Simply delish!

Most of the ingredients used are local, and the vegetables are produced by their father on his little plot. We always have to remind ourselves to leave room for one of Jean-Michel's desserts. Susan recommends the Chauffe Ciré aux pommes et noix, but I can't decide between the Charlotte aux Poires with Coulis de Framboises and the Nougat Glacé au Miel d'Acacia with Apricot Sauce. If you are on a chocolate kick, the Fondant Aux Chocolat will sate your habit for a month.

The clientele in the restaurant are an interesting mix. Because Martine and Christophe speak good English there is usually a number of English (with a smattering of Dutch and Swedish) tourists and ex-pats, often with French friends. At lunchtime, though, you get groups like the staff of the local bank all dining together, and the crowd is more local. 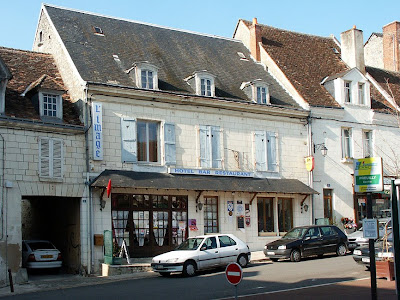 It pays be wary of what Christophe tells you, however - his English is good enough (and his delivery totally deadpan) that when he tells you the restaurant is fully booked, or it is closing in 5 minutes, he may be indulging in a good old leg pull. When asking for a wine recommendation he also has a tendency to claim he can "only afford cheap wine, myself". It so happens that there are some good wines on the list (and the bottle of Burgundy chosen very good indeed) - and the house wine is nicely drinkable as well.

Although the family's focus is on the restaurant, an additional bonus is the fact that the hotel has 4 rooms available. Whilst they may not be the most modern hotel rooms in existence they are always spotlessly clean (I want that cleaner in my house) and comfortable. We have stayed there a number of times over the past two years, and visiting friends from Australia are lodged there.

It is clear that English speakers come here because they know they can comfortably speak English, but Martine and Christophe take their cue from whichever language you address them in. They will switch effortlessly when they realise you are floundering, which was very useful discussing politics just before the presidential election last year, and for the mayoral election this year.

L'Image has become a sort of home away from home for us for the past couple of years. My father enjoyed his meal there so much he was in danger of licking the pattern off the plate - and to my family there can be no higher recommendation than that.