I have now been to Fontevraud twice - once with Susan and once with my parents. The route we like to take is via Richelieu. 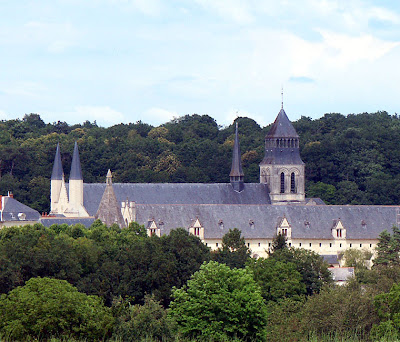 In a way it is an almost ideal place to start discovering how abbeys worked, and how they looked when in use. Usually in England an abbey or monastery is a pile of stones - which may be a beautiful ruin in a stunning location - but it takes a lot of imagination to see them in operation. When they are not a ruin they have been converted into a country house, obscuring the sense of them as monastic buildings just as effectively. Fontevraud has almost the opposite problem. It is a brand new medieval church with its attendent brand new 16th and 17th century buildings, and struggles to give any idea of antiquity (until you go around the back and see the parts that are yet to be restored). There is also some rather fanciful 19th century style restoration of the kitchen building. The more recent restoration is part of the largest ever heritage conservation program undertaken by the French government. 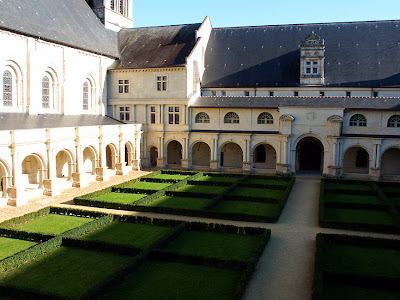 As a place where you can start seeing how a monastery/convent operated day to day it really works well. (Yes, you read right - a monastery/convent. It was a double monastery with nuns and monks on the same site. No wonder there was talk.....). The order was always overseen by a woman, and these often came from distinguished families, as did many of the nuns. Amongst their number were members of the Plantaganet and Bourbon royal families.

Its post revolution history is mixed. After Napoleon had what could be described as the an attack of the Henry VIII's it became a prison, and remained as such until 1963(!!) In places it still looks like a prison, too. Once you know that, you can look at the smooth shiny new bits a lot more sympathetically.

A history of the buildings and their occupants can be found here.