Today I saw the dragonfly
come from the wells where he did lie.
An inner impulse rent the veil
of his old husk; from head to tail
came out clear plates of sapphire mail.
He dried his wings: like gauze they grew;
thro' crofts and pastures wet with dew
a living flash of light he flew

(From The Lady of Shalott by Tennyson) 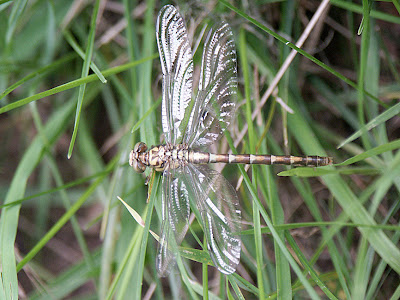 In Britain this species is called the Green-eyed Hooktail, although it has never been recorded there. The French name is le gomphus à pinces. The genus name means 'claw club', so all the names refer to the large and fiercesome looking male claspers. The females, such as this teneral in the picture above don't have this feature. The specimen pictured was newly emerged and having a tough time in the strong wind on the riverbank at Yzeures-sur-Creuse. Once matured she will be more strongly yellow coloured and her wings will lose that slightly 'milky' look. This is the most common and widespread Pincertail. It likes unshaded rocky rivers and can be seen in central France from June to September. 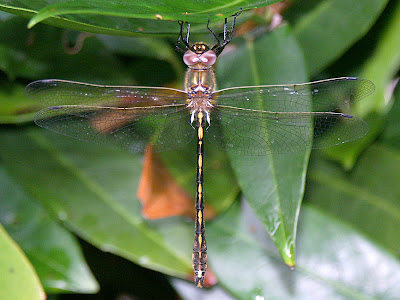 The French name is la cordulie à corps fin. The scientific and French names both describe the slender 'waisted' appearance of the abdomen. The English name is a more prosaic description of somewhat more obvious features - this is a dark metallic green dragonfly with bright yellow (orange) markings. They have brilliant green eyes and the wing bases are suffused with saffron yellow which develops with age. This is a rare dragonfly, whose stronghold is France. It is extinct in Britain. It likes tree-lined, slow-flowing rivers and can be encountered around Preuilly-sur-Claise between June and August. This male (above) was discovered in a friend's garden in Roux, a hamlet near Preuilly. It was photographed early one June morning, hanging from the laurel leaf on which it would have spent the night. 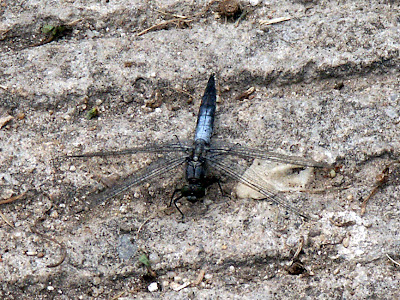 The French name is l'orthetrum reticule. I think both the French and the scientific names probably refer to the pattern on the females' abdomen - 'reticule' is 'pocket'; 'cancellatum' is 'lattice worked'. The English name is clearly illustrated by the picture of the male (above) taken on the boat ramp in Preuilly-sur-Claise in September. This is obviously a young male, as he has not yet acquired all his powder blue pruinescence which will turn him into a 'blue arrow' - darting fast and low over the water. They love to sunbathe on open ground, like dried mud or the concrete boat ramp. This is one of the most common dragonflies throughout Europe, favouring large open standing or slow-flowing waters. In central France it is on the wing from May to September. 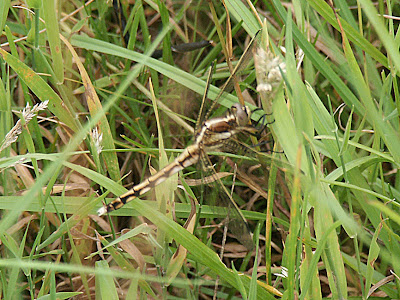 The French name is l'orthetrum à cercoides blancs. All the names refer to the same feature, which is no more than the appendages at the tip of the abdomen. The species is very similar to the Black-tailed Skimmer, but slimmer and paler, with a more contrasting pattern that includes dusty stripes between the wings and on the sides of the thorax. The picture (above) is of a female photographed on a very windy day in June near the Maison du Parc in the Brenne. Note the heavy yellow leading edge to the wing. The species is common and has a preference for open ponds and lakes. It can be seen in the Touraine and Berry between May and September. 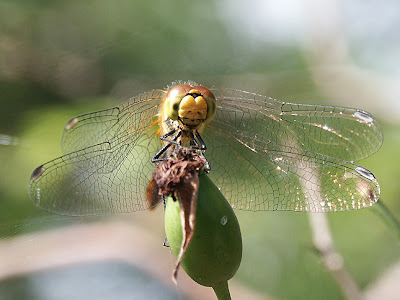 One of my favourite species, because they are small and where they occur, do so in large numbers (for Europe - no comparison to somewhere like Kakadu in Australia though), so you can be surrounded by these busy twinkling little creatures as you walk. The French name is le sympétrum noir and in North America they are known as Black Meadowhawks. Occuring in the boreal zone across the world, in the wider scheme of things they are a rare species. In Britain they are associated with bogs and moors, but in France, although they have a preference for acidic waters, they are somewhat less fussy about their habitats. The one pictured (above) is a young male. He will turn black with dull yellow markings in due course. Male Black Darters are surprisingly easy to recognise in the field, no matter what stage of colouration, as they have extremely prominent secondary genitalia (sadly, not visible in this photo, as the angle of the shot does not allow). He was photographed in July on the réserve naturelle de la Chérine in an area of wooded heath. They can be seen from June to September in the Brenne.
Southern Darter Sympetrum meridionale 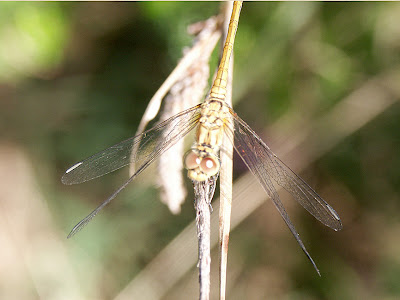 The French name is le sympétrum meridional, so all the names are referring to its mainly southern distribution range. This is quite a non-descript and difficult to identify* species. The picture (above) shows a female, taken at the réserve naturelle de la Chérine in July. Note the unusually long pterostigma (the opaque mark on the front edge of the wing, towards the tip), which is perhaps the most obvious clue to the identity of the species. This on is demonstrating a pose characteristic of darters, perched on a vantage point with the wings dropped and the abdoment somewhat raised. They tend to return again and again to these favourite perches, which can be a great advantage if you want to photograph them. It is common in the Brenne, flying from June to October, but rare elsewhere in the region. It prefers sunny pools, muddy oxbows and seasonal swamps.
Dragonflies are the big bruisers of the order Odonata. ferocious hunters that move through the air looking like tiny glittering helicopters. Their wing muscles are so strong that they are physically incapable of holding them above the body for any longer than a split second - the thoracic muscles snap them back down again to flap or glide. They are extremely visually oriented creatures, with huge eyes, hunting by sight and scooping up their prey in a basket created by their bristly legs.
Dragonflies are ideal bio-indicators for climate change. It is clear that dragonfly distribution ranges are almost all increasing. They are able to respond quickly to changes in temperature and are heading north and west through Europe. France is starting to see Turkish species and Britain is seeing French species establishing breeding colonies. Historically dragonflies are well recorded and they are easy for amateurs to record, thus providing useful quantities of accurate data Europe wide. In general, their numbers are not being affected by habitat loss (with a few exceptions) - quite the opposite, as over the last 40 years water quality has tended to improve. Therefore, the recent expansions in range can fairly safely be attributed to increasing in temperature.
*Thanks to Eric Mâle-Malherbe from the Chérine nature reserve for looking at this image and confirming that it is most likely S meridionale, although not all the key features can be seen.