The communal forest of Preuilly covers a total area of 954ha just north-east of Preuilly sur Claise. This is made up of 575ha broadleaf forest (primarily oak), 327ha pine and 18ha of mixed forest. The mathematically adept amongst you will have noticed that this only adds up to 932ha. The remaining 22ha are étangs - well, we are in the land of a thousand lakes, after all. The altitude of the forest ranges between 119 and 144m above sea level and it is situated on the border of the Parc Naturel de la Brenne. 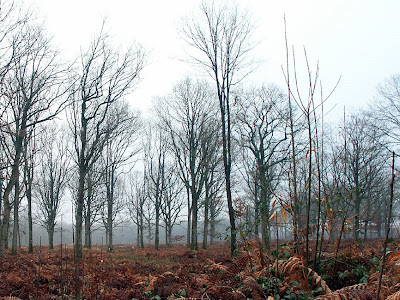 In the 1st century BC, the Gauls exploited the forest for iron ore mining and smelting. In the Middle Ages the forest was part of the Baronnie de Preuilly. From the Renaissance to the mid-19th century, the forest was used to fuel the fourneaux de la Claise ie in the extraction of iron, the production of charcoal and as a dumping ground for the slag resulting from the processing of minerals. In the 19th century a tile factory operated from an area called la Fontaine Bourbon.

The map on the information board, with the forest itself beautifully reflected in the plexiglass 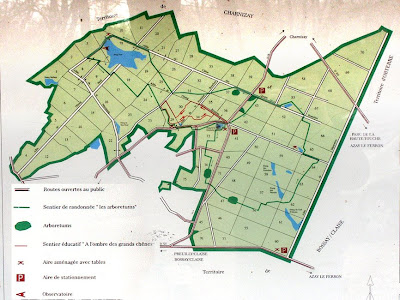 At the time of the Revolution the forest was sold to the Château Azay-le-Ferron (the home of the Barons of Preuilly after they left Preuilly itself) and it remained part of the château lands until 1951-2 when the Hersent-Luzarche family gifted the forest to the town of Tours. That is why the name is officially la forêt de Tours-Preuilly, even though Tours is at the opposite end of the départment.

Etang de la Ribolache, in the middle of the forest 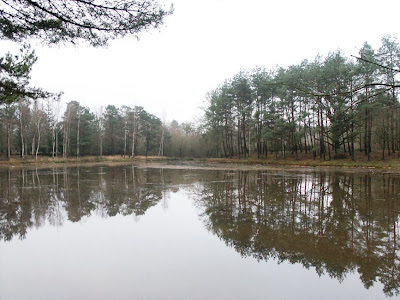 Email ThisBlogThis!Share to TwitterShare to FacebookShare to Pinterest
Labels: Maps, nature and wildlife, the Brenne

Is it the Maire I see cruising the étang de la Ribolache-Ribaloche on his vedette?
BTW beautiful photo of said étang.

You are far too beady by half, chm :-) Ribaloche is the correct spelling, but I always have to look it up and can never remember. And surely the new maire is too busy sorting out Preuilly just now and does not have time to be larking about in a boat? It must be some other local star you see.
Susan

You see, Susan, I've been a translator and editor for many years, so it is almost second nature to spot typos in other people's writings. But, as we say in French, "Ce sont les cordonniers les plus mal chaussés," which means that I don't spot my own mistakes or typos! LOL
As I said many times before, your pieces on nature especially are extremely interesting and informative. Keep up the good work.
Charles

I really appreciate your feedback. Susan