In the middle of Preuilly on the river by the lavoir there is a group of six enormous London Plane Trees Plantanus x hispanica which were planted in 1820. They have never been pollarded and have been allowed to simply grow and grow. They can be seen from all over town, looming over the rooftops in a great green mop, the effect exaggerated by how closely they are planted so that in leaf they all merge into one another and look like a stupendous single tree from a distance. 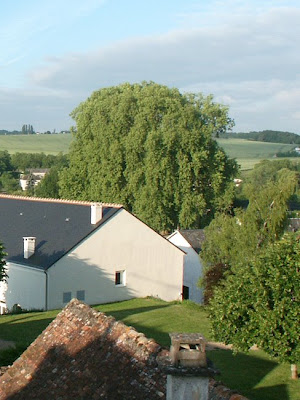 Many trees in public spaces in France are neatly pollarded and trimmed on an annual basis, unless the trees are intended to form an avenue, like these at Chanceaux pres Loches. Although our trees are planted in two rows, six trees hardly constitutes an avenue - they're there to shade the boules surface (court? arena? does anyone know the offical term? IS there an official term even?). Nevertheless, our Plane trees no doubt thrive due to their proximity to the river and a nice easily accessible water supply. Nearby, the Lime Trees Tilia in front of the school have been pruned every autumn for many years. 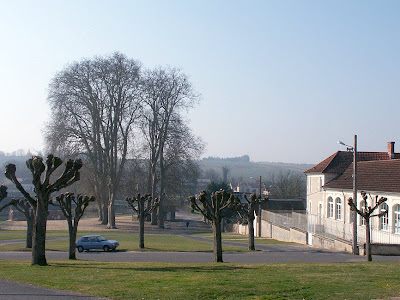 The origins of the London Plane are shrouded in mystery. No one is sure whether they are a natural or a cultivated hybrid whose parentage is questionable. It may even be a sport ie a naturally occurring mutation that then breeds true. They appeared sometime in the 17th century and my friend Todd tells me that no one knows how long they live, as none has ever been recorded as dying of old age.
The Avenue, Chanceaux pres Loches 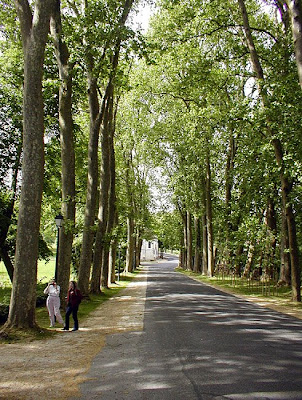 Email ThisBlogThis!Share to TwitterShare to FacebookShare to Pinterest
Labels: Loches and area, Pictures of Preuilly

hello. Delurking to say how much I'm enjoying my visits to your site.

We holidayed near La Guerche http://www.lagrande-metairie.com/index.html last year and really enjoyed the area. You should be subsidised by the local tourist board!

La Guerche is beautiful, isn't it? Thank you for delurking, and very pleased you like the blog.

In Bayeux, near the cathedral, there is an enormous plane tree, l'Arbre de la Liberté, planted on March 30, 1797, which seems to be in good condition after 200 plus years.
l

Oh? I've been to Bayeux and never noticed it - but in my defence, the weather that day was verging on blizzard. We are back in Bayeux in June, so I will check it out. Thanks for the info, as ever.

Ahem...Simon has just pointed out to me that we actually have a photo of the cathedral at Bayeux, and the tree is visible. Obviously I was so concerned about the possibility of frostbite I failed to notice it. Better luck next time I hope.

Don't we use the term "pitch" for the place where you play boules or pétanques? Otherwise, it's un terrain.

There is an amazing boules arena in Azay le Ferron - about a dozen terrain all in a small field. Next trip I will take a special photo.

I just blog-hopped from Ken's blog, impressed by your plant knowledge. I love seeing your photos of Loches and Angles s. Anglin, and particularly Chanceaux pres Loches. Isn't it a tiny gem? (Unless they expanded the nearby garbage dump.) I think the painted building has something to do with their literature festival, La foret des livres.

Louise - very pleased you blog-hopped - do call in again :-)

I haven't noticed a garbage dump encroaching. Which direction is it in? We have walked up through the hamlet and along the beautiful sunken lane to the cemetery, but otherwise have just stopped a few times in the spot where the photo was taken.

The painted building you speak of I assume is that rather OTT hunting lodge on the right opposite the chapel (chapel visible in the background of the photo)? It is a very odd building, but I know nothing about it - obviously something to check out more thorough, so thanks for the hint.

The garbage dump exists already, nearby, but there was the threat of expansion closer to Chanceaux. Two years ago we addressed a letter in our best French (not very good) to the president of the republique begging him not to spoil the town with the expansion. No doubt our letter turned the tide against it!

Have you ever been there when the restaurant under the umbrella-shaped tree is open? It looks so appealing.

No, we have never eaten there, but I guess we'll get there one day - we like to try everywhere.