Buckwheat Fagopyrum esculentum, sarrasin or blé noir in French, is native to central Asia, but long introduced to western Europe as a crop of poor soil prone to waterlogging. It is a member of the Dock family and was once widely grown in the Brenne and Bretagne. The scientific name makes reference to the plant being tasty and edible. The pyramidal brown nutty flavoured seeds are ground for flour which is used in gallettes, those delicious lacy pancakes traditional in Bretagne and usually served with a savour filling and a bowl of cider. 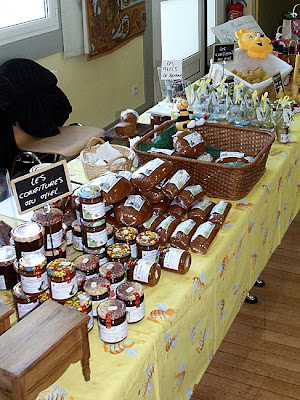 Sarrasin also produces another, less well known culinary delight - miel de sarrasin (buckwheat honey). In the Brenne, apiarist Marie Christine Tortiget produces the strong dark crystaline honey and says it is perfect for making another local treat called pains d'épices (a rather dense warmly spicy cake, seen in the middle of the picture above). She also points out that buckwheat makes an excellent green manure and the honey is rich in minerals. 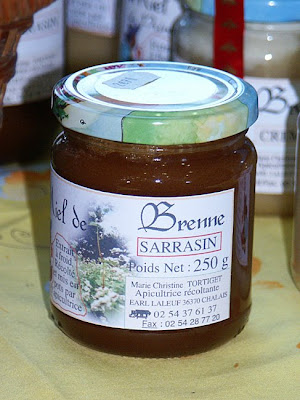 Mme Tortiget describes her miel de sarrasin as smelling strongly of wood and earth, but I think the aroma is of damp hessian sack. Don't be put off - like many bosky smelling foods, the taste is distinctive and endorphin producing.

No doubt Sarrasin has a special flavor whether it is in those delicious "crêpes bretonnes" or in honey with which I'm not too familiar, I must say.
The most common honey, in northern France, is "miel d'acacia." which is my favorite. Acacia is Robinia pseudoacacia, a tree native to Virginia. It has naturalized in France, where it doesn't grow as tall as its first cousins in Virginia. Strangely enough, in France its flowers has a sweet, heady smell, whereas in Virginia they are almost odorless.

I wish I cold taste that "pain d'épices", it makes my mouth water in anticipation!

Your comment about Robinia has reminded me I must write about this beautiful and interesting tree. À plus - Susan.