It now looks to me (unless I have misread the Nouvelle Republique online, which is always possible) that not only does Preuilly have a new Maire, but it has a new regime as well. 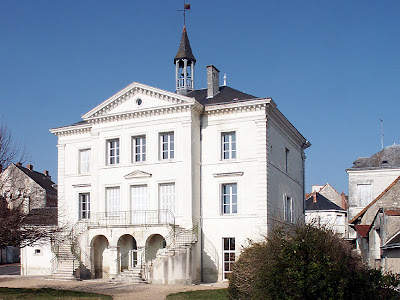 The outgoing Socialist mayor has been in the Mairie for many a year and didn't head a ticket this year. The election for a new council was a 3 way contest, and although we haven't been around Preuilly all that long, we have met all those heading lists (two of whom are near neighbours). The winner appears to be M.Bertucelli, the plumber, who ran a ticket as an independant.

Preuilly has 15 local Councillors and this year three people chose to head lists. The lists are 14 others who all campaign on the same issues (it helps to think of it as a leader and his cabinet, as each member of the team is given a set of issues to deal with). In the first round of voting everyone who gets more than 50% of their possible votes is automatically on the Council. Voters can choose to vote for a list, or vote for 15 individuals. In Preuilly's case, M. Bertucelli got the most votes and 12 people on his list were elected. One other individual was elected and one place remained vacant as no one else received the requisite number of votes. This final place means that there is a second round of voting the following Sunday*.

According to the local newspaper, M Bertucelli was very surprised by the result and was not expecting it. The paper says that 'lui a volé la vedette' - an expression which amused us greatly (literally it means 'he stole the speedboat' and is presumably the equivalent of the English 'to steal a march').

The Mayor is elected by the new Councillors at their first meeting. This first meeting will be presided over by whoever is the oldest Councillor and anyone who is not a French citizen cannot be elected as the Mayor or Deputy Mayor, although they can be Councillors. It has caused a certain amount of media interest that this year all over France many English people have been asked to stand, and quite a few have been elected.

Any EU citizen who is a resident can vote in the communal elections so long as they register for the electoral role, but you cannot vote in the nationals unless you are a French citizen. This year in Preuilly turnout was about 70%, which is pretty amazing for a place where voting isn't compulsory. Average turnout for France was about 40%.

Congratulations to M.Bertucelli, commiserations to those who campaigned but were not rewarded by the polls.


*On the second Sunday another person from M. Bertucelli's list was elected.
Posted by Susan at 10:00

"Vedette" in French is also a movie star, as in "vedette de cinéma." So I think it means that hte new "maire" stole the stardom.

Ahhh...thanks chm. Mind you, the thought of our plumber as a movie star is just as amusing :-)

No matter what it means, from now on I will always see the new Maire as a masked motorboat thief cruising alongs the Claise.

You've got a lot of imagination! Good for you.

I didn't know voters could split their ticket like that -- I thought they had to vote for a whole slate. Thanks for explaining it.

About the vedette, did Bertolucci steal it from somebody or did somebody steal it from him? I'm confused. Voler la vedette à quelqu'un means to steal the show or the spotlight, as CHM said.

You can indeed split your vote into 15 votes for individuals, or do the quick and easy single vote for a list. Candidates can also stand as individuals - known as standing 'en papillon'. Gilles Bertucelli stole the limelight from our previous maire, who had been in the post since 1969 I think - ages anyway. I am rather proud of Preuilly's citizens coming out to vote on local issues, as it should be in local elections, rather than the trend for making a statement about national issues and voting Socialist because you don't like Sarko's recent shenanigans.