Flooding in early May is not an uncommon occurrence in the Touraine Loire Valley. This year all the watermeadows and river flats along the Cher and other smaller rivers in the system have certainly been doing their job. They allow the river to expand and overflow without causing any real inconvenience or damage. All the sandbanks in the Loire are covered in swift flowing water, so we hope that the terns and other river bird have not started nesting yet. If they have, all the eggs will have been washed away.


A largish tree floating down the Loire at Amboise. 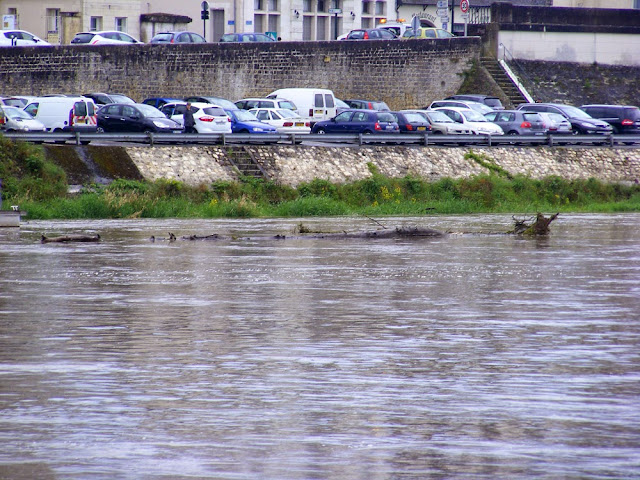 On 4 May we were at Amboise and just standing around on the Ile d'Or in the middle of the Loire there, when a large tree floated by, going at quite a lick. It must have shot straight through and under the bridge without snagging, as I photographed there later and it wasn't visible. I wonder where it ended up?

The water level of this year's floods are quite high, but we have once or maybe twice seen them higher. And they are nowhere near the level of the 7 May 1940 flood that turned the chateau of Chenonceau into a stinking sludgy mess just before the Germans arrived at the beginning of World War II. The damage and mess wasn't cleared away until after the war, and was probably a blessing in disguise. The chateau sits in the bed of the river Cher and the river was the border between occupied France and 'free' France. In the early days of the war the chateau was not taken over by some unpleasant branch of the Wehrmacht as happened in so many places. Passeurs were able to facilitate the crossing of many people who needed to escape to neutral Spain by taking them in through the grand northern front door, through the chateau and stepping out the southern back door where they slipped into the forest and away.

In December 2004, the parking lot down by the Loire, under the château d'Amboise and shown in your first two photos, was completely under water.

My mistake. It was December 2003. I posted photos of the Loire cresting at Amboise here.

It’s a good thing that there are counter-measures implemented by the city itself to avoid that overflow from affecting the buildings and streets near the river. I shudder to think if all that water managed to reach the streets. Anyway, thank you for sharing that glimpse into the past. I hope to read more in the near future. Cheers!

Interesting that it was the year of the canicule. Before our time. I wonder if Chenonceau flooded in 2003?

We will be coming your way come rain or come shine!!! Leaving San Francisco June 16 for CDG, then Chartres and Amboise! I'm taking my daughters to see the old ancestorial area, Channey sur Lathan. Looking forward to our adventure in beautiful France, even through possible strikes and floods!