This painting, which currently hangs above the entrance to the cloisters in the cathedral in Tours has had a rather unexpected recent history and caused a bit of a kerfuffle. 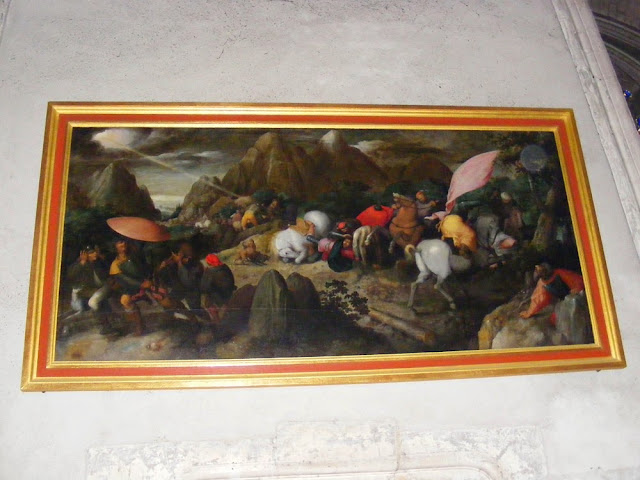 In 2010 the 17th century 4 metre wide by 1.9 metre high Flemish painting depicting the conversion of Saint Paul was restored. It had been discovered in a storeroom four years earlier by a young man working as a sexton. At the request of the senior architect from Historic Monuments, he was clearing out old furniture in the storeroom, to facilitate access during upcoming restoration work on the facade of the cathedral. When the painting was put on public view in 2012 he claimed ownership rights to the painting!

His argument is that the painting had been totally ignored and forgotten, despite its artistic value and so far as I can ascertain there is an ongoing legal dispute. When rediscovered in 2006 by him it was leaning against the back of a heavy freestanding cupboard, amongst planks of wood and material that was destined for the rubbish tip. It had probably been there a very long time, as it was filthy and not listed on the cathedral's inventory of 1906, at the time of the introduction of the law to formally separate church and state. It had presumably been missed, either because it was already in the storeroom and so covered in dust that its value wasn't appreciated, or because it was deliberately hidden by the priests just prior to the inventory. The sexton alerted the curators to the existance of the painting and according to him, heard no more about it until one day he saw it, fully restored and hanging on the wall of the cathedral. And this is really the heart of the matter - the young man feels as if he has not been treated with the respect he deserves.

The sexton's claim is based on Treasure Trove law, and the fact that he came upon the valuable work by accident. If his claim is upheld he is entitled to half the value of the painting. The DRAC (Department of Culture, who own and manage the cathedral) on the other hand, is countering by pointing out rather bluntly that possession is nine tenths of the law. The DRAC curator says that the painting was neither hidden nor buried, so Treasure Trove doesn't apply. His view is that the painting was simply stored, and the sexton was directed to clear the room in the course of his day's work, so the discovery was not really accidental. Thus the painting's status is just like the other furniture in the room. He thinks the painting is part of the heritage of the cathedral and therefore clearly belongs to the cathedral. Also he points out that it was the DRAC who recognised the interest of the painting and acted to restore it. The restoration and reframing cost €30 000 and it was only after the restored painting was hung in public that the sexton made his claim. Gilles Blieck, the curator, hopes that common sense will prevail and you can sense his exasperation when he is quoted in the newspaper articles.

Treasure Trove law crops up from time to time in France and invariably causes a controversy. The best known cases have involved masons discovering hoards of gold hidden in walls. The finder of such treasure on someone else's property can claim half the value and it is on this basis that the sexton is claiming. For his claim to be upheld certain conditions must be met: the find must be down to chance; the treasure must be hidden or buried; and there must be no clear and/or established title to the treasure.
Posted by Susan at 09:00

Interesting controversy. I don't think the law backs up the sexton's claim.

I reckon the sexton has a chance.....'stored' doesn't sound like stuffed behind a cupboard covered in filth, nor is it in the 10906 inventory....but I suspect that the whole thing could have been avoided if the chaps from DRAC had acknowledged the find more generously.....perhaps made a bit more fuss of his discovery.