Every year at this time, between mid-May and mid-June, someone will email me with a photo of a striking blue flower they have photographed on the roadside or in some calcareous grassland. Invariably they say they've never seen anything like it before and ask if I can identify it. 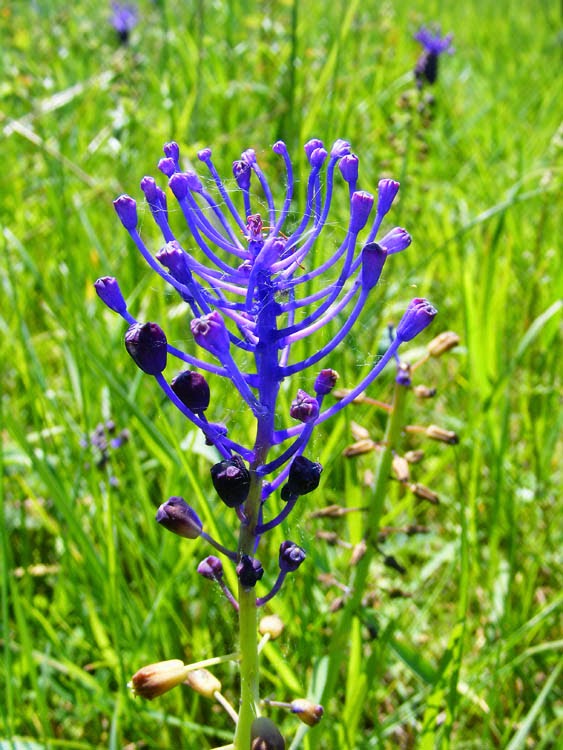 It's a Tassel Hyacinth Muscari comosum, related to Grape Hyacinth M. neglectum and quite abundant in certain pockets in the Touraine Loire Valley. It makes a lovely blue haze in the grass when there is a biggish colony.
********************************************
Clandon Park House Fire: Some readers will know that I used to work for the National Trust in the UK, in the Historic Buildings Conservation Department. Some readers will also have heard that one of the Trust's properties, Clandon Park House, was extensively damaged by fire on 29 April. I will be closely following the recovery and clean up operation, and if you are interested in the process, my friend and ex-colleague Emile will be documenting it on his blog. The Trust is a world leader at managing this sort of operation, having learned by bittersweet experience 25 years ago at Uppark. It's too early to say if an Uppark style reconstruction will be attempted, but whatever approach is taken it will be a massive heritage conservation project. There will be sorrow for the things lost forever, but considerable excitement at the prospect of saving much from the ashes and the opportunity to apply specialist skills and learn new ones in the heritage conservation field.

The evidence shows that bees are attracted to flowers treated with certain neonics. This is linked to research that I highlighted in an earlier post showing that bees like a buzz and will preferentially go to flowers that give them a low dose of caffeine or nicotine. The pesticides are called neonicitinoids because they are synthetic developments of nicotine, a well known poison.

The results are nuanced though. Honey bee colonies survive the effects of these sublethal doses by metabolising the poison more quickly than other species, and by the sheer size of their colonies. Bumble bees don't gain weight as rapidly and don't produce as many queens when affected by neonics, both of which will impact on breeding and overwintering success and lead to a decline in numbers. Solitary bees simply didn't breed at all when exposed to neonics.

Lynn Dicks raises the point that crop margins (and I would add jachere fleuri/wildflower mixes) may not be the refuges that many assume they are. If they are contaminated with neonics, as is often shown to be the case, then they are worse than useless and it may explain why experiments using such systems have always produced disappointing results in terms of increasing pollination services.
Posted by Susan at 09:00

Very interesting about the neo research...
especially about the crop margin wild areas!!

And it was a cistude that T&G found...
it is now back out there as a Borg...
a very excited young scientist came to collect...
and Terry Pin's future movements will be highly recorded.
Most Northerly yet in Touraine... but close to a suspected colony...
and NOW is the time males go "walkabout"...
it is around six years old.

I wondered if it would turn out to be a cistude. How exciting for you! I'm sorry to have missed the fun.

Sorry to hear about the two fires. I think I remember Uppark--underground passages between house and outbuildings, paths lined with bones; is that the house?

Paths lined with bones doesn't ring a bell for any house I can think of, but Uppark does have underground passages from the house to the service buildings (kitchen etc).

"Paths lined with bones"...
it couldn't be that the paths were edged with those Victorian/Edwardian ceramic lawn-edge tiles where the top edge looks rather like a forearm/shin bone...
I think it is meant to be a scroll...
we had a set from the gate to the front door...
then, whilst we were away on holiday one year...
they sorta got up and walked...
must have been shinbones!

To be honest I can't tell you anything about the garden at Uppark. I've only been there twice -- once for a curatorial visit to the restored interior and once for the funeral of the man who oversaw the conservation restoration.

My diary says they were deer knucklebones edging flower beds near the game-curing room.

Not an idea I wanted to try at home.

I remember the game larder, but not the knucklebones. Mind you, deer knucklebones can't be very big! Seems like a fiddly choice of garden edging.