André-Guillaume Darlus du Tailly was one of Louis XIV's 'tax farmers general', private citizens who managed the nation's tax system and ensured Louis was paid his dues. Darlus was born in Paris in 1683 and died there in 1747.

He was the son of a wine merchant who supplied the court. His mother was the daughter of a currier (a leather dresser working in the tanning industry). He was appointed as a farmer general in 1726 and like the other dozen or so tax farmers, made a personal fortune. Completely open about his humble origins he often remarked that his grandfather was a simple ploughman. He was regarded as gentle, honest, polite and charitable. 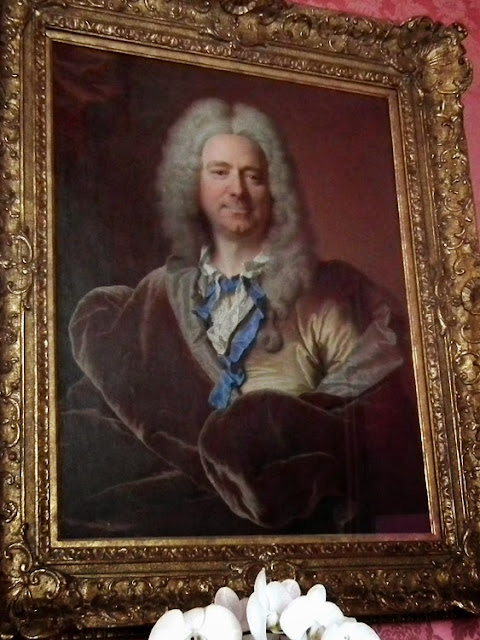 His oldest daughter Marie-Genevieve-Charlotte married the President of the Paris Parliament, Louis-Lazare Thiroux d'Arconville. One of his grand-daughters married Louis Hurault, Marquis de Vibraye in 1764 (which is presumably why the Vibraye family home, the Chateau of Cheverny, has his portrait hanging in the house).

In 1733 Darlus commissioned a portrait from Hyacinthe Rigaud, the King's favourite portraitist. It cost 600 livres. The entry in Rigaud's account book for the commission notes that Darlus wished to be painted in a rather eccentric mode of dress. He appears very informal, with bare neck and the blue ribbon undone, probably as a reference to his modest background. Rigaud appears to have painted the entire work, rather than passing it over to his assistants after the important bits were completed. My guess is that the two men liked one another, and Rigaud has certainly produced a very fine portrait of an interesting man.
Posted by Susan at 09:00

This sure is a beautiful portrait.

What is a carrier?

Sorry -- typo. He was a currier (a leather dresser).