An intriguing new theory about our property in Preuilly has emerged. On Thursday I spoke to someone who passed on a colleague's thoughts after he had seen the place recently.


The back of our barn, with its three 13th century windows (mullions removed who knows when, the central one converted into a door, the right hand one greatly reduced). 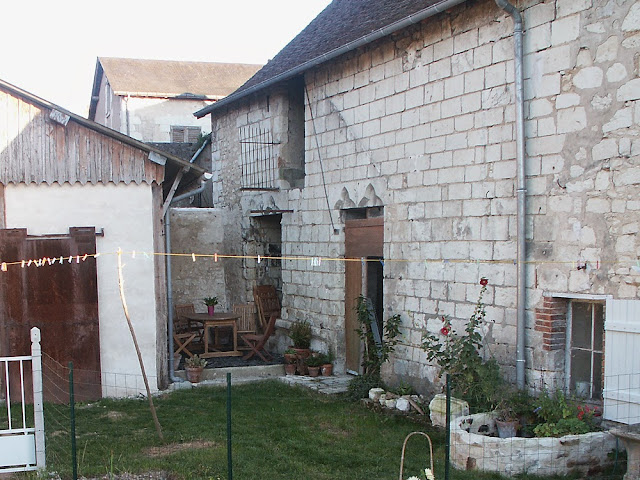 He pointed out that we are hors les murs (outside the walls) of the medieval town, but it is clear our barn was some sort of public or institutional building, not a private building. He has suggested it may have been part of a leper hospital. He felt the large ground floor windows, with their finely carved lintels, would fit this function, as would the position outside of town. Apparently there is a record of Preuilly having a leper hospital. No one seems to have doubts at any rate that it is a 13th century building.

UPDATE: Simon has checked the Histoire de la Ville et du canton de Preuilly by Constant Moisand (1846) and he has this to say:

My translation: "The church of Saint Nicholas was situated in the suburb of the same name. Proof of this is that the surrounding field still bears the name 'Field of the Cure'. This building, after having been converted into a hospital, passed into private hands well before the Revolution. It is believed that the second designation would have benefitted lepers, and was a clinic, an institution from the 13th century, common to all towns..."

Curiously, our barn is not mentioned at all in this book. I don't think what he says really offers proof that Saint-Nicolas was the leper hospital, but neither would I discount it. We can't find any evidence, for instance, that the field he talks about (presumably the modern plan d'eau) was known as the Champ de Cure. It is not named as such on the 1813 cadastral map. I assume he is indicating that the field was associated with the presbytery, but the word cure has two meanings. It can be either a living (religious) or a treatment for a disease.  If the field was known as the Champ de Cure, perhaps the two meanings got conflated somewhere along the line. His sentence about the leper hospital is in rather old fashioned language and I have translated what I think it means, but others are welcome to refine it and let us know.


One of the trilobe carved lintels. 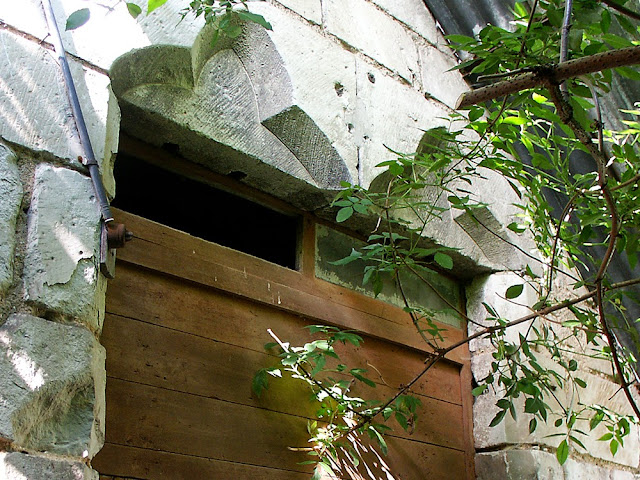 For an alternative theory on what our property was originally, read this post.

********************************************
Bizarre Presidential Accidents: I know I shouldn't laugh, but today is the 95th anniversary of the date that President Paul Deschanel was found wandering along the track late at night in his pyjamas, after having fallen out of a window of the presidential train at Montargis. You can read a little about this charismatic and eccentric French politician here. There is an amusing French language account of the incident here. I first heard about him by watching an episode of the French equivalent of 'Celebrity Who Wants to be a Millionaire' on telly.
Posted by Susan at 09:00

Susan, what you have just written is very interesting...
especially as one who is a Cadfael addict...
could you think that the chapel...
a few hundred metres from your house....
might have been linked with the leper community, too?
It would explain the rather odd position, relative to the rest of town.
Tim

No, the chapel is late 15th/early 16th C and is a chapel of ease for the old town cemetery. The park it stands in was once the cemetery. In the 19th C the bones were all dug up and transferred to the big new cemetery just across the way.

The current chapel is....
I wasn't thinking of that building as such...
I was thinking more of a chapel building on that site....
viz: former leper cemetry and defunct chapel...
then re-used as town cemetry...

When they did the dig at St.Martin at Palace Plain in Norwich...
which was in place before the cathedral....
they discovered four levels of internments....
and, when the inside of the church was excavated they discovered a slightly smaller building on the same alignment and a chunk of "celtic" knotwork....
with signs of burning on the upper face...
it was thought probably to be the top or arm of a large sandstone cross...
the burnt timbers associated with it dated from before the sacking of Norwich by the Danes.
The level of soil inside the walls of the cemetry were much higher than the surrounding street levels of the plain itself...
some of the buildings in the immediate area... including the Norman merchants house that is below the magistrates' courts...
are at street level.
Tim

It is indeed possible there is an older chapel under the existing one. The guy from the Fondation de Patrimoine thinks it is a distinct possibility and worth investigating.

Very interesting!
The way you have to go about finding out these things almost makes it even more exciting!
Imagine how dull it would be if your ancient house came with a list of all its former uses!

In fact we now have a list of its former uses from today back to the Revolution. Beyond that the records are illegible or non-existant. Everything is speculation and it's unlikely we will ever know anything about the place for certain.

Susan, reading the new bit that you've posted...
I think that the likelyhood of the Plan of Water being the field mentioned is wrong...
it is too far from the chapel... if your barn was part of the leper complex...
then go from yours to the bottom left corner of the chapel's patch...
the field would most likely have been between where the college now is...
that corner and yours... and across to Rue du Cygne....
possibly parallel with Rue de la Croix....
the route of the D42 is likely not to have been thought of back then...
the route to Grand pressigny would have been alongside the river...
Chaumussay, Etableau....
the "bend" in the Rue Saint-Nicholas is "new" too....
Rue du Faubourg Saint-Nicholas....
and the rest of Rue Saint-Nicholas would have run straight...
across the bottom of the market place.
Your road and Route de Chaumussay are one and the same...
and have been cut in two by the "new".
And the field that the new-build Cité des Tilluels is on is the wrong side of the Chaumussay road from the chapel and yours...
so the field would have been to the North of the road.
What think you?

And I think you ought to start a separate page about your property itself...
re-edited as and when you find out something new!!
It could become longer than the blog itself....

Curiouser and curiouser! Although as you say you might never be absolutely be sure of some of the uses, it is nevertheless very interesting to explore the various possibilities.

I think you might be confusing the Chapelle de Tous les Saints with the former Eglise Saint-Nicolas, which is now a private home in rue Faubourg Saint Nicolas and backs on to the plan d'eau.

We already have a label for 'Our House in Preuilly'.

Susan, I am not refering to the Eglise Saint-Nick....
I think he's got that confused / mixed with the leper hospital which would NOT have had more than a small Chapel...
viz: the Chapelle de Tous les Saints...
which makes Champ Gorin....
where the college now is and which leads up to yours...
in the 1700s, Cassini map, there were NO roads leading out of Proolie in that direction....
there is every possibility that M. Constant Moisand was working from a mix of spoken record and written text....
views and thoughts change all the time...
even in the "modern" booklets....
"Il était une fois les lieudits du Grand Pressigny" had as the entry for ours one short paragraph... the latest edition has almost half a page... so we had to buy that one too!
Modern archeology now tends to re-bury what it has unearthed....
unless it is too important or needs vital preservation...
in case future techniques prove better able to analyse what is there if it is in situ.
And it is great fun anyway... digging and delving through the records...
having a thought in one direction, a surmise in another....
and the odd, wild stab in the dark which might lead somewhere.
Tim

"We already have a label for 'Our House in Preuilly'."....
but where do I find the HISTORY...
I can see Kitchen, Plumber, Buying the place, the Garden, roofing, etcetera, etcetera....
but no History tag!

Susan, I don't think there's anything particularly old-fashioned about the last sentence in French except for the word maladrerie, which according to the dictionary means lazaret or lazar house (neither term is familiar to me, but both have to do with the old disease known as leprosy of course). The author says that the later use or function (destination) of the building had to do with (intéressait) lepers — it was a leprosy clinic (or leper colony), as you say, which was a typically 13th century institution that existed in most towns back then. At least that's what it think it says. Sometimes texts are just poorly written and therefore hard to decipher or translate. Have you noticed the old Saint-Lazare chapel in Noyers-sur-Cher? It was a 13th-century maladrerie, from what I understand.

BTW, there's a word missing in the first sentence of the French paragraph. It should say "ce qui le prouve" and not just "ce qui prouve" — not a big deal but a little confusing. I wonder whether "a passé dans des mais privées" shouldn't be "est passé" but I'm not sure. CHM could probably tell us.

Many thanks for the fine tuning of the translation. I thought the word destination seemed rather formal or old fashioned, but perhaps I just don't read enough of the right stuff. A lot of this 19th century stuff can be fairly hard going.