Pont de Ruan is a typically pretty village in the Loire Valley area. Its star attraction is a large and picturesque mill complex, currently in the throes of restoration. The village is situated on the Indre River, a medium sized river with many mills, which is part of the Loire system. The project has received European funding and is co-ordinated through the Communauté des Communes (ie local government).

The original mill was constructed in 1285 and for most of its life was a flour mill. In the 19th and 20th centuries, up until 1972, the waterwheels powered an ice making factory.

The twin undershot wheels (below) were both turning when we visited, although the building housing them was encased in scaffolding. 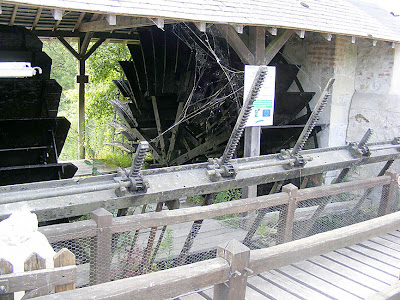 Because the river Indre has been divided into many channels here, with complicated arrangements to control flow to feed several mills, there are a number of islands. This one (below) covered in ash trees, is stablised in the ancient tradition. The trees are carefully cut and trained so that their roots provide buttressing and revetements (a bit like traditional hedge laying) to ensure the island doesn't wash away. You can see this system of bank stabilisation along the canals of the Marais Poitevin too, to our west, also using ash. 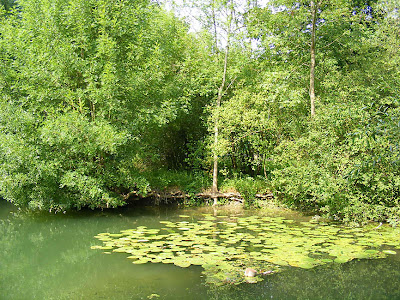 A view of the mill on the other side of the river (below) across the millpond. 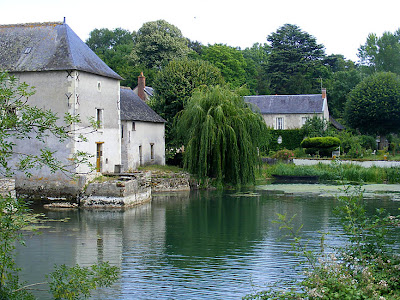 A bridge out on to an island with picnic tables (below). The tables are chained to the trees, and at first I assumed it was to stop vandals throwing them into the river, but then it occurred to me that it was more likely to stop them being washed away in a flood. Vandalism of that nature is quite rare in the Loire. 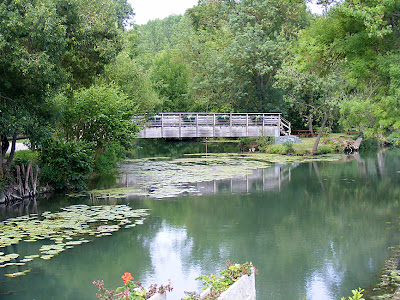 It is beautiful and peaceful. I always liked watermills (moulins à eau).