Despite the drought, the pear crop looks like being excellent around here this year. I've just picked our Beurre Hardy and they are sitting in a box to finish ripening. I'll poach them and make sorbet from the syrup in about a week's time. Later on, after they've swelled some more on the tree I'll pick our Asian pears (nashi, or pomme-poire, as they are known in French) and Doyenne de Comice (perhaps to coincide with the local Comice d'Agricole, or agricultural show, as their name implies).

Meanwhile, we've been photographing other people's pears. Birds and insects love pears, and often get to them first.

Below a peaceful scene of co-existance, with two species of ladybird and a greenbottle enjoying the flesh of a pear growing in the potager at the Prieuré de Saint-Cosme after a blackbird has broken it open. 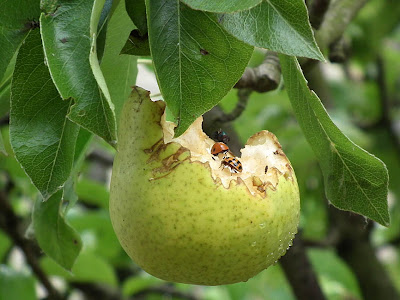 Contrast with this scene of fury below. These hornets at the Prieuré d'Orsan were determined to kill one another over this scrap of pear skin. The greenbottle just ignored them. 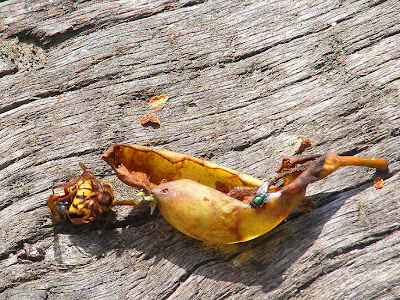 Social wasps, lined up like suckling piglets to get their share of juicy pear flesh, below. Once again, a greenbottle lurks. 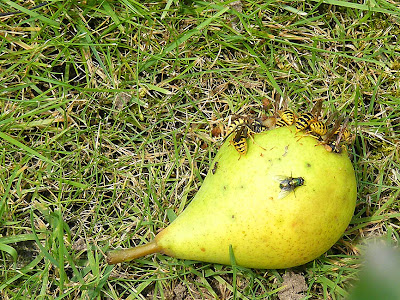 Thanks for this post. I just went out and picked a dozen pears from our little tree. Most years, they just fall to the ground and are wasted. Susan, are blackbirds known to be inordinately attracted to pears? There were two of them under my tree when I went out a few minutes ago.

Simon, sorry for my confusing comments yesterday. I was going too fast and not reading carefully. I ended up being redundant.

Ken. No problems - It was useful to have my typo pointed out