Preuilly sits at the heart of a prehistoric factory. The soil here is chalky, with many limestone outcrops. With this type of geology comes veins of silex (flint) - a material vital to prehistoric man. In some areas of the world, man's pattern of settlement is dictated by the availability of water. In the south Touraine water is abundant everywhere, so it was undoubtedly because of the flint that man came to live in the Claise and nearby valleys in the Early Paleolithic period, and the evidence of flint tool making has been found in many places in the district. Occasionally specialist tools made of shell or other material are found, but most tools from this time are flint.

Flint is very heavy - much heavier than the limestone, therefore it is worked where it is found. Very often, archaeologists notice that there are two piles of waste, that have fallen each side of the flint knapper's leg. These piles of waste can tell you how high the individual was sitting and what type of tools they were making. Archaeologists are able to reconstruct the flint nucleus by studying the pattern of detritus at some sites. This type of examination of the evidence gives a good understanding of the technical aspects of flint tool manufacture.

Recently I attended a flint knapping demonstration at our local museum. The flint knapper was a local teacher and archaeology enthusiast, Bertrand. He taught himself the technique, based largely on observation of ancient tools and 'factory' sites, which can reveal much about how the flint was worked in prehistoric times.

Bertrand using the antler hammer on a flint nodule. 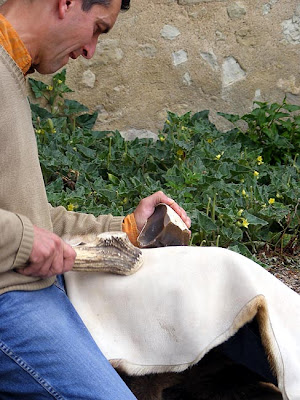 Step one for the modern exponent of the art of flint knapping is to remove your mobile phone from your pocket. It seems being walloped with a hammer stone never does them much good.

Next, inspect your lump of flint closely. It may be a dalle (thin and flattish) or a rognon (nodule). The dalles will strike like a bell if they are sound and without flaws. It is more difficult to judge the quality of a nodule, but you hope for a nucleus that will strike a variety of tools from alternating sides. Each lump of flint is coated with a cortex of limestone, which sometimes needs to be removed before you can assess the best way to strike. The flint is dark grey, brown or orangey, somewhat translucent looking. The limestone cortex is pale and a few millimetres thick.

A large feuille de laurier in the foreground, with a smaller one behind,
some polishing stones, antler 'nibbling' tools and a couple
of lames (blades) to the right. 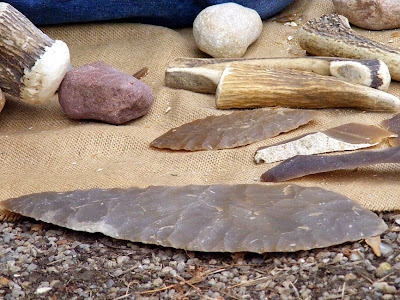 The first tool he made was a scraper, done by striking the fat end of the nodule and causing a piece the size and shape of a scallop shell to shear off. It was quickly neatened along the edge with some deft taps from the antler. This type of tool, and evidence of its manufacture, has been found in great numbers in the Brignon valley not far from Preuilly. Simple tools like this can be retouched several times in their useful lifetime.

Turning the nodule over, he then created a knife with a fine, very fragile edge. This was followed by using the face created to strike off a series of long thin flakes using the antler hammer. These types of tools were all typical of the Early to Middle Paleolithic, Bertrand said, or up to 40 thousand years ago.

Clockwise on the hessian mat: flint dalle, flint nodule,
polishing stones, antler nibblers and hammers, boxwood club / hammer
and a couple of pieces of tuffeau (soft limestone) to sit on. 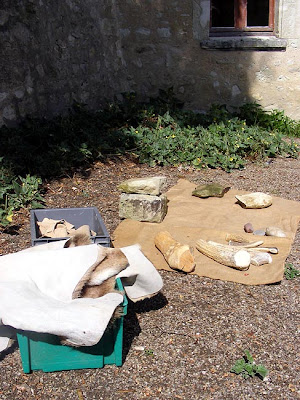 When producing the lames or lamelles as they are called in French, it is important to prepare the striking platform each time between hammer blows, to ensure that the stone will shatter along a regular and predictable line. Here in the Claise Valley they apparently made a special style of lame in the late Paleolithic (40-30 thousand years ago) known as livres de beurre, a technique specific to this area. Striking off lames allows a multitude of sequential tools, from scrapers to burins. The little flakes could be glued into a bone handle and used to cut sinew and blood vessels when butchering game.

In the latest phase of flint tool making, the techniques evolved to produce bifacial points, often of considerable size (30+ cm and 1cm thick). In French these are known as feuilles de laurier. They are essentially a big knife, which could take a whole day to make. The feuilles de laurier differ from the earlier blades because they are symmetrical. This means they can be retouched when they lose their keeness. Earlier sliver like blades have a different angle on each side and cannot be retouched. Small 'laurel leaves' can be glued to a lance to form a spear tip using resin or wax and twine. Such spears are designed to wound an animal, which would then have been tracked until it collapsed from loss of blood and exhaustion.

So much flint was used in prehistoric times it is now difficult to find big pieces suitable for making the larger tools. The toolmaker's level of skill is also nothing like the prehistoric artisans - even as a modern experimental archaeologist, you simply don't get enough practice at working the material. The quality of modern flint working tools is poorer. Modern deer are much smaller than the giant creatures that lived in prehistoric times.

It is clear that the southern Touraine and adjoining northern Vienne, from Bossay to the confluence of the Claise and Creuse rivers, was a significant tool making location. Not everywhere had a local source of flint and tools from this area were traded and circulated widely throughout France, especially to areas like Brittany, which has much harder rock and no flint.

PS Bertrand and I share a family name. He and I have a theory that we have a common ancestor from Germany, so are distantly related. Members of the family probably reached England and France due to the widespread practice of hiring German mercenaries from the Middle Ages onwards.
Posted by Susan at 09:00

I wish we'd had a chance to read your beautifully clear explanation before we wandered lost among the many (many many many) stone tools at the museum in Le Grand-Pressigny. Well done, Susan!

Interesting post Susan. We are taking some friends to the museum at LG-P next Friday, so the information is very timely.

Facinating! I will have to come back to read more about it.
Congratulations Australia for Cadel's victory! I am so happy for him.

Sorry, it is faScinating!

Forty thousand years ago! Adam and Eve weren't even born yet!

Carolyn, Gaynor: I know this is deeply wicked of me, but I have still never been in the new museum building.

Nadège: Well, I heard it from you first! (Sports and me don't connect very often.)

CHM: It's fairly potted, and I hope I understood Bertrand properly. I deliberately left out hand axes and bifacial tools other than feuilles de laurier to keep it from getting too complicated.