In addition to chosing a bronzy/metallic/rust coloured tile for the bathroom (better than I describe them) we decided we needed a highlight on the floor. We chose some small glass tiles which are a combination of flat mirror, patterned mirror and dark glass which are meant for walls and come in a gauze backed square. We cut the square up into strips of two tiles, and laid them in a line from the door. Sounds easy, but glass tiles dont snap they shatter, so we had to cut them with a diamond blade.

As a picture paints a thousands words.... 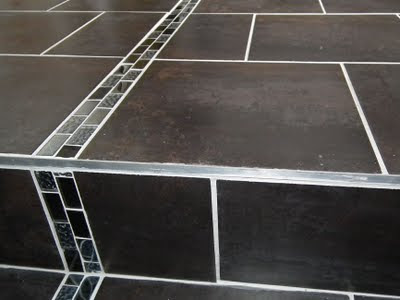 Once that was done it was time to call the plumber again. There was some confusion and tribulations as he didn't turn up the first day, turned up the second day in the 10 minutes between the end of lunch and us getting back from lunch, then arrived at the third time lucky, but with only the hot water ballon rather than with the ballon and instructions to fit it and plumb in the bath. This meant time was getting short as my parents were due to arrive last Thursday and we wanted the bathroom usable.

As the plumbing hadn't been done by Wednesday we sorted out temporary plumbings (a plastic basin, electric kettle, and 20 litre water carrier. I went off to Paris on Thursday to collect the AP's (see Coot Club) and then the plumber rang to ask if we were in. Mickael - who did the first lot of plumbing - arrived and fitted the hotwater ballon (under Susan's supervision) 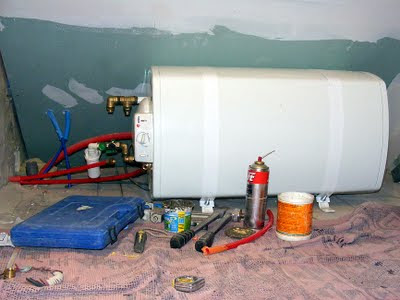 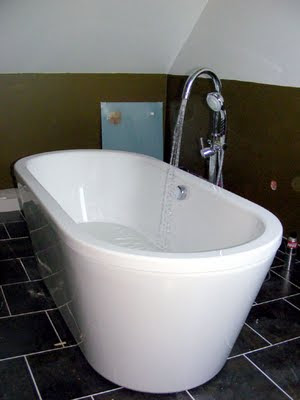 Exciting isn't the word for it, I tell you.

I like the glass tile insert in the floor - a nice bit of bling!
Lovely bath too!

Very nice and I am excited for you Simon!

WOW! is the word for it. And WOW for the bathroom also!