This new biscuit by Bonne Maman® is proving to be a real hit. We really like them, but often when I go to the supermarket there is just empty shelf above their price ticket. This is partly due to the fact that Bonne Maman® are running a special which gives 1€ off if you buy three packets, but it is also because everyone likes them.

They are not very sweet, and are great with a cup of coffee, or tucked into a bowl of red fruit compote and vanilla icecream. Sablés des près translates as 'shortbread from the meadow', and they contain sesame, poppy and sunflower seeds. We bought our first packet by chance at SuperU in Saint-Aignan, because we needed a snack. We've been seeking them out ever since.

The Bonne Maman® biscuit recipes are simple and traditionally based. The factory is supplied with milk from local dairy farms and they use fresh eggs not powder. No synthetic flavourings, colourings or preservatives are added. The sablés des près packet lists beurre frais (not palm oil, I am very pleased to report). 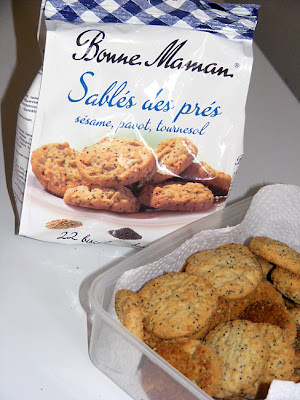 Bonne Maman® is the most famous range made by Andros, a family owned company based in Lot. They make high quality jams, bottled fruits and biscuits that we often buy. They are a famously secretive bunch, never giving interviews. The Bonne Maman® products are distinctively packaged, and reuse of their jars for homemade conserves or as trendy vases or drinking vessels is actively encouraged by the company. The jams are 10% of Andros' total business, taking 35% of the French market and selling 68 million jars a year, made from 20 000 tonnes of fruit (most of it fresh, unlike some of their rivals). The biscuits gain market share year on year against the giants like LU (Kraft Foods). A third of their jam is now exported all over the world, but only 10% of their biscuit production is sent out of France. Bonne Maman® products are significantly more expensive than their rivals, with jam working out at about 11€ / kg (compared to 7€ / kg on average), but consumers know and trust this quality product so are prepared to pay the premium. The supermarkets love the products because they provide a good margin.

The Bonne Maman® range was launched in 1971, because Andros company founder Jean Gervoson realised that most women now worked outside the home. Although they no longer had time to make jam, there was still a desire for homemade jam, and Gervoson set out to provide a product that was as close as possible to homemade. He named the new range in honour of his grandmother, whose recipe book provided some of the inspiration. The product packaging has not changed in 40 years, and the simple white label with text and no picture is deliberately reminiscent of the handwritten labels our mothers and grandmothers used. With their gingham patterned (vichy in French) lids these quietly understated pots of jam are instantly recognisable on the shelf even in the biggest supermarket- a stroke of marketing genius.

Apricot Jam from Bonne Maman is available at Waitrose... or was last year. If it is a quantity thing, it should soon be flooding the shelves again.
Susan... NEW? We've been eating Sablés de Près for the last six years... They are Pauline's favourite biscuit and very near the top of the list for me too [so hide the packet(s) when we come round....] But the offer seems inviting... TOO inviting. Damn!!

WV is "exubsces" so I will have to think of some "exubsces" to go to the supermarket!

I used to find "Bonne maman" cookies at Gelson. Their jams are my favorite along with "Wilkin & Sons ltd". I actually splurge on their "little scarlet" last month.
BM favorite are the peach and the apricot jam but I also like the red currant.

BM biscuits and jams are extensively available in supermarkets in the UK. Sometimes they are even available as BOGOF (but not very often)

I love Bon Maman products, and their jars which are perfect for storing all sorts of things from nails and screws to beads and teabags. I have never had anything Bon Maman which wasn't top notch. Their confiture du lait is fantastic in porridge but you don't see it too often in the shops - it has a brown gingham lid, as opposed to the most common red, followed by green or blue.

Fascinating info. I'd rather assumed it was just another conglomerate brand, but clearly they are Rather A Good Thing.