A couple of new caravanne cars: 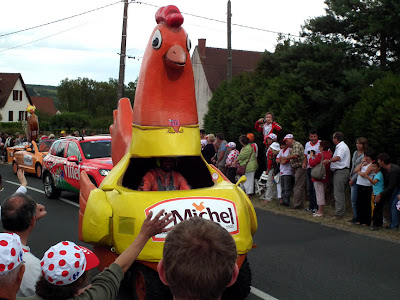 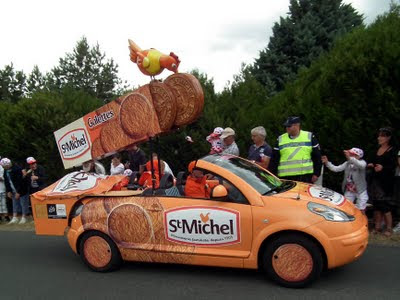 and lots of shouting and stuff.

This year we were stood at the top of the climb out of the Cher River valley at Faverolles sur Cher. This meant that instead of the whooshing of two years ago, we had serious riding up hills faces.

Mum and Dad were most impressed (although my mother confessed to being a bit confused by it all). We really enjoyed the fete atmosphere, even though the buvette was chaotic. (No-one, including the officials, had quite worked out how it operated: as one explained to Susan "well - we don't get the Tour de France every day"). Alongside the beer and sausage tents there was a crepe tent, some food tasting, stunt bicycles, a decorate your bike contest for the kids, stationary bike races (rolling road things) and various community and artisan food stalls.

And now the movie:
Yes, if you know where to look and stop on the correct frame of the coverage, you can see us. No, you won't recognise us - in fact, not even my mother would recognise me, and she was there....

And that's why we stay home to watch Le Tour on the tellie.
I'm sure the excitement of 3 mins of noise is fantastic BUT!.
No, I didn't see you guys but I stayed awake until 2.00 am.

Leon - it's a party with some bikes interrupting :¬)

It looks like fun... albeit chaotic as you say!