Those of us learning French are always looking for ways of keeping the hard slog of learning fresh and engaging. One way I quite like, but don't really use often enough is to read poetry. The trick is to find the right poet, and Pierre de Ronsard (1524 - 1585) the French Renaissance court poet is a surprising contender. Even for someone with just about functional French like myself, the language of his poems is clearly beautiful, with charming imagery (rather like the sonnets of his contemporary, Shakespeare, would be if one was learning English, I think). Ken wrote a little post about Ronsard and translated one of his poems a while ago over on Living the Life in Saint-Aignan.

The Prieuré de Saint Cosme, looking from the
remains of the transept across to the graveyard. 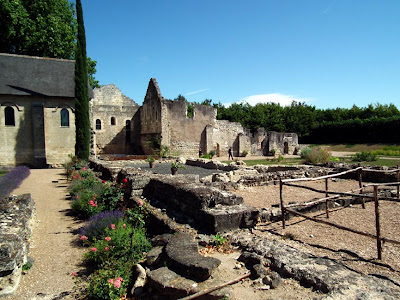 Ronsard spent a good deal of time in his latter years at the Prieuré de Saint Cosme, where he was the Prior, and where he came to die. During his lifetime he acted as the hub for a group of thinkers and writers, and the Priory thrived, as it is on the pilgrim route for Santiago de Compostela. After his death, financial mismanagement meant the decline and eventual closure of the site and the land became a sort of communal resource. Local people divided it up into allotments and used the buildings as barns or salvaged the stone for other building projects.

Looking from Ronsard's grave to the refectory. 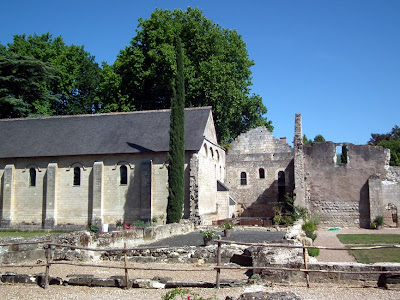 In the early 20th century La Sauvegarde de l'Art Français (the equivalent, I suppose, of the Churches Conservation Trust in the UK) spearheaded by wealthy French and American women, discovered the Priory and over a period of time bought up individual parcels of land to bring the site under their control and protection. The locals at the time took a fairly dim view of this activity, which deprived them of access to good land, and for their part, the new owners looked upon the residents as yokels with no sense of heritage or culture.

The great arch had been bricked in, but in the 1950's the
'sauvegardistes' opened it up in order to give a truer
impression of the place in Ronsard's time. 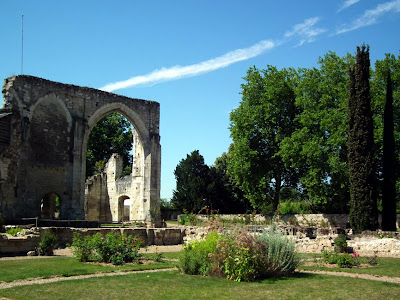 Today the site is managed by the Conseil Général, and after extensive archaeological digs, is open to the public so they may enjoy the romantic ruins and the beautiful garden now maintained there. Ronsard loved roses and refers to them often in his poetry, so the garden features many lovely roses. Bruno, the Head Gardener, told me that gardening on an archaeological site has some challenges. They are not allowed to water in certain places because of the risk of damage to the remains, and because it is an organic garden, they must painstakingly hand weed all the walls, rather than spray with herbicides. He said they would like to allow some of the garden to go a bit wild, but after repeated complaints from the public about how certain areas were looking scruffy, they have had to give up providing long grass to shelter wildlife.

Apples in the potager, trained as cordons on the angle. 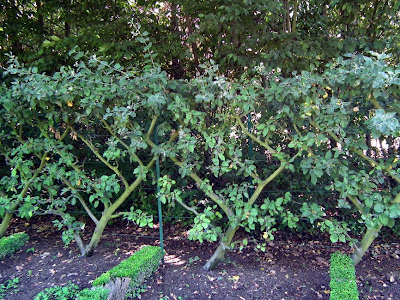 We, and our guests, get in for free because we have joined the Conseil Général's Ambassador scheme. The Priory is in the village of La Riche, now part of the Tours agglomeration, and a very interesting visit if you are in the area, especially if you want a peaceful stroll in a lovely place, easy to get to from the centre of Tours.